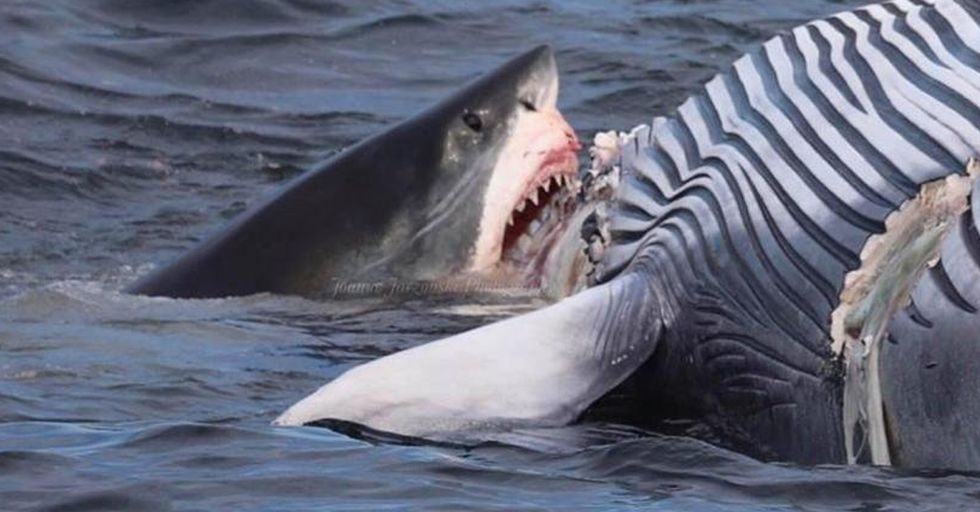 Get ready for jaws to drop because we've got one of the coolest experiences to ever be caught on camera. If you're afraid of sharks you might want to look away or face your fears to see the most amazing thing ever.

Some lucky tourists were on a boat in Cape Cod, just cruising through the peaceful waters. Little did they know a great white shark was looming below them, hungry as a horse, or hungry as an 18-foot shark – whoever has a bigger appetite. Luckily, there was an easy meal waiting for the shark and thankfully it wasn't the people on board.

These photos captured one of the most unique experiences in nature, a great white shark feeding on a dead whale carcass on the surface of the water, in full view. Terrifying, amazing, beautiful and a little disturbing, this unbelievable moment left the tourists speechless and online viewers in utter amazement.

It's the original shark flick, that was known for striking fear into every beach-loving human, even if the shark didn't look that real.

How could you forget this epic scene?

After watching this movie I was afraid of swimming even in my community pool let alone the ocean.

Or maybe you're a new-age shark movie fan.

Sharknado was a weird film, but also weirdly loved by many people. So much so they made a second and third film to appease the Sharknado fan club. They only got worse and I don't even know how they made money off these films but for some reason, people just loved the idea of flying sharks.

Maybe 'Meg' was your thing.

The movie Meg was kind of a dud, but was nonetheless a great source of fear for any ocean lovers, no matter how ridiculously animated the shark looked. Who knows! The Megladon could still be around today!

Don't get me started on Shark Week!

An entire week, every year dedicated to these creatures?! Some animals don't even get one day to celebrate their existence!

The shark obsession is so real.

Sharks are clearly one of the most popular animals in the animal kingdom and there is a deeply rooted fascination with these creatures.

That's why people pay hundreds of dollars to swim with them.

Shark cage diving is a popular tourist adventure for people visiting tropical areas. They'll take any chance they can get to be close to these powerful creatures.

For those that like to live a little less wild.

If jumping in a cage surrounded by great white sharks isn't your thing, there are also options to watch sharks safely from the comfort of a big boat.

Though not all boats can protect you from the power of a shark, so don't count yourself as entirely safe.

These tourists were about to get the show of their life.

160 people boarded a boat headed to the deeps of Cape Cod for some whale watching and were about to see something they would never forget.

Photographer and marine biologist Joanne Jarzobski caught this amazing moment on camera when a great white shark decided to take a huge chunk out of a dead whale carcass.

From whale watching to shark watching.

These tourists were initially discouraged to see a dead whale but when they saw two sharks approaching and noticed that one was significantly larger than the other, they realized they were in for a wild ride.

Nothing goes to waste in the ocean especially when it comes to food. This finback whale was already dead when the great white found it and saw this as an opportunity for an easy meal.

I'm assuming this was everyone's reaction on that boat.

It's not every day that you see a great white shark gnawing on a dead whale. I mean, this is a once in a lifetime experience!

Now just how big was this shark?

Joanne shared in a Facebook post that the shark was about 18 feet long.  Think of a giraffe underwater. That's basically how long this sucker is.

The pictures don't even do it justice!

Here's a video of the shark getting its grub on in front of an entire boat of onlookers. She's got no shame in her game.

Passengers on a whale-watching boat were stunned Sunday when they witnessed a massive great white shark chomping on… https://t.co/ZcbjJWHYXW
— The Boston Globe (@The Boston Globe)1539724059.0

This 18-footer is enjoying its easy meal and the tourists on the ship were in awe of what they were seeing.

As amazing as this moment is, I think I might be avoiding saltwater for the next few years.

Cape Cod was a little shook, that's for sure.

An 18-foot great white shark is not an everyday sighting in the waters of Cape Cod, so it drew a lot of attention to the area.

You can't always get this lucky.

Joanne explained that her goal was to simply capture photos of the whale carcass and had no idea what was going to happen next. "We had received a report in the morning that this whale was floating in the bay," Joanne said in an interview with Business Insider, "and we were asked to try to document it on our way out on our whale watch."

It's a mix of emotions.

As cool as it is to witness this, it's also a little hard to see a dead whale floating in the ocean. Although the cause of death of this specific fin back was unknown, it's can still be quite troubling for marine biologists to witness this.

The circle of life.

Hyannis Whale Watcher Cruises made a statement regarding the event, writing on their Facebook that "While it always saddens us to see a dead whale, the great white sharks are helping to recycle it."

Everyone was truly floored!

"Getting the opportunity to see a great white shark in action is truly a once-in-a-lifetime experience for our passengers and crew," Joanne said in an interview.

This is all actually quite positive.

"As an important animal in our environment, sharks have gained a notoriously bad reputation," Joanne explained. "Yet sharks are a very good sign of a healthy ecosystem."

This isn't the first or the last time.

After a fatal attack, Cape Cod must grapple with what it means to be a great white shark epicenter. @NatGeo explain… https://t.co/HskJbFxIhk
— Apple News (@Apple News)1543435502.0

Although the sighting of an 18-foot great white shark might be incredibly rare, other smaller great white sharks have been found in the area, making Cape Cod somewhat of an epicenter for these animals. This means shark attacks can happen more than we'd like to realize.

They've had some close calls.

Cape Cod is on the lookout for more great white sharks since they are making themselves right at home in the cape.

Some fisherman caught this guy on camera swimming casually near their boat.

We just need to stay calm.

“We cannot...guarantee that you’re never going to run into a shark, that no one will ever be attacked by a shark or… https://t.co/VoXaXHMmMo
— Martha MacCallum (@Martha MacCallum)1538191946.0

As long as the people of Cape Cod don't panic, they should be fine.

Swim safely out there.

These creatures can be seen as dangerous but they are really just doing what they were made to do: eat and swim.

If you're a little shook, it's okay, join the crowd. Share your speechless reactions with your ocean-loving friends!