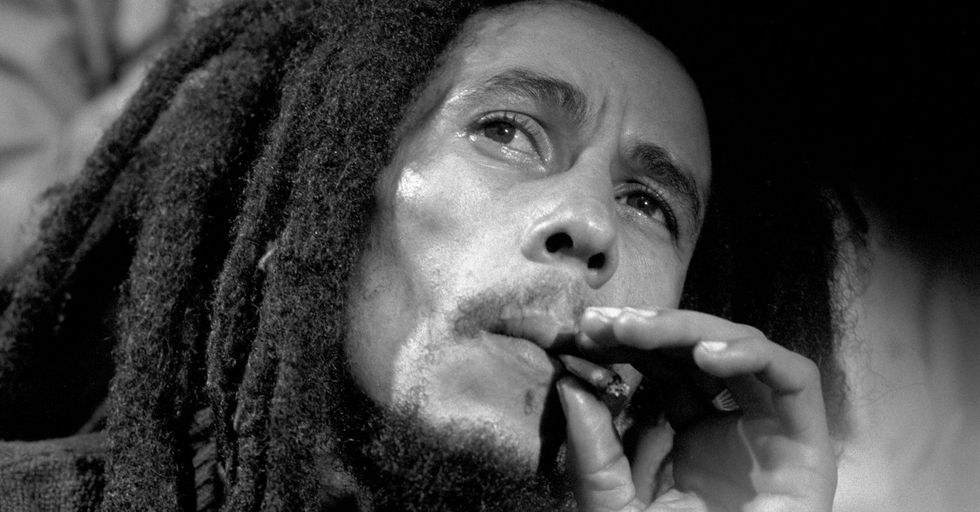 When you think of Bob Marley, what comes to mind first? Do the famous lyrics of "No Woman, No Cry" or "Redemption Song" drift into your head? Or do you picture his trademark dreadlocks tucked beneath a Rastafarian hat?

For many fans, the first thing that pops up is an image of Marley smoking a joint, surrounded by a plume of pot smoke. But how did the reggae icon feel about recreational marijuana use?

Walk into any college dorm and you're bound to find at least one poster with an image of Marley surrounded by oversized pot leaves.

While Marley has been a symbol for pot enthusiasts for decades, but do the people who don T-shirts depicting him smoking a blunt know why he smoked? Even for Marley superfans, this might come as a surprise.

While most people spark up a joint or take a hit from a bong as a way to relax, for Marley it was something much more meaningful.

On his official website, Marley is described as “a staunch supporter of the plant’s meditational, spiritual, and healing abilities, and a fierce opponent to those ('political forces') who tried using marijuana as a vehicle for oppression, and to keep certain groups of people out of the societal mainstream."

Rastafarians are very strict about their marijuana habits.

Those who are especially pious abstain from using it at all, but most reserve it for medical and religious purposes. The purpose of ganja is to "aid in meditation and perhaps help the user achieve greater mystical insight into the nature of the universe," according to ThoughtCo.com.

Many have compared the Rastafarian use of marijuana to Holy Communion in Catholicism.

It's a ritualistic act, and Rastas feel that the practice of smoking brings them closer to "Jah," the Rastafarian term for God.

Marley's son Ziggy conducted an interview with Quartz on what would have been Marley's 70th birthday.

He discussed his late father's legacy, and how he was more than just a symbol for the marijuana movement. “Bob was a revolutionary," Ziggy said. "He was a person who wanted social justice in a real sense, in a real physical sense. There’s a lot more to it than the whole, ‘Bob Marley, love and peace and smoke weed.’"

"It’s deep! It’s all right for some people to pass it off as that. But it’s much deeper. And the message is always relevant. ‘Get up, stand up for your rights?’ ‘One love, one heart, let’s get together and feel all right?’ It’s all still very relevant."

Along with the ritual of "ganja," Marley followed several other tenets of the Rastafarian movement.

He wore his hair in long dreadlocks, which is a Rastafari practice based on Leviticus 21:5: "They shall not make baldness upon their head, neither shall they shave off the corner of their beard, nor make any cuttings in the flesh." Marley also ate a strictly vegetarian diet and refrained from surgeries that would require significant incisions.

While Marley didn't take pot smoking lightly, he was very vocal and its legalization.

“Herb, herb is a plant," he once said in an interview. "I mean herbs are good for everything. Why, why these people who want to do so much good for everyone, who call themselves governments and this and that. Why them say you must not use the herb?" “Them just say, ‘no, you mustn’t use it, you mustn’t use it because it will make you rebel.’ Against what?" he added.

In 2016, his family launched a weed line called Marley Natural, inspired by the late artist.

Although the decision to launch the brand has faced some controversy due to Marley's vehement anti-capitalistic views, his family has spoken out about how much marijuana inspired his creativity and spirituality.

Marley's daughter Cedella spoke about her father's pot use with Huffington Post.

“Creative inspiration was everything for my father — it was like breathing or life to him. Every time he smoked, he was inspired and an open mind was the open door for his creative inspiration," she said. "He thought the herb was actually a gift."