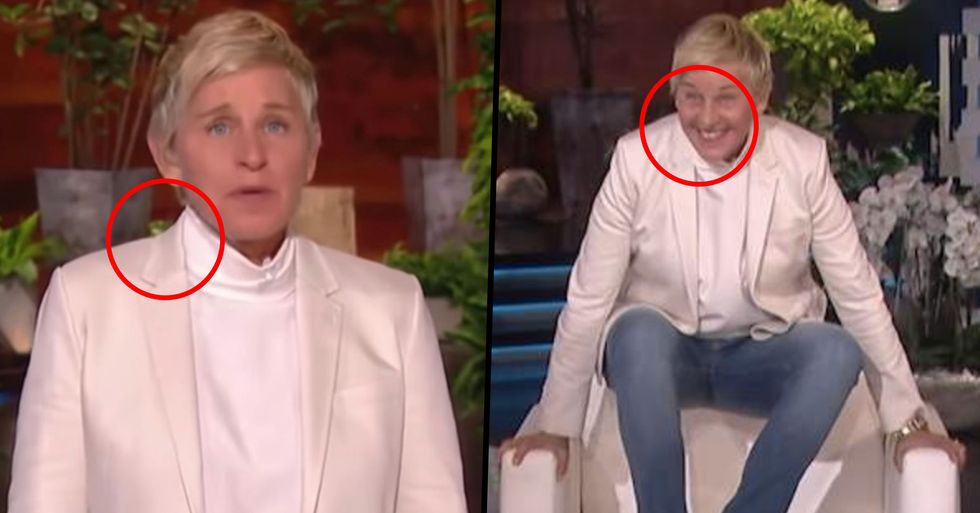 For the first time ever, Ellen DeGeneres directly addressed the toxic workplace allegations during the opening monologue of her show. But one body language expert has their doubts...

Ahead of the premiere of the eighteenth season of The Ellen DeGeneres Show...

Ellen spoke out on camera during the opening monologue of the episode, addressing the toxic workplace allegations.

And, after viewers watched the 4-minute clip...

Reactions came in strong, to say the least. Don't worry, we've got the clip coming right up...

One body language has spoken out after hearing what she had to say, and they didn't hold back.

And be warned - they make for some pretty uncomfortable viewing.

If this is any indication of how she treats her fans...

Ellen has also been in hot water for her treatment of Cardi B.

It seems she just can't resist mocking her guests.

As the old adage goes, if you haven't got anything nice to say ...

Or how about her roast of Jessica Simpson?

It seems Ellen just has no sense of good manners at all.

And these came with a side of hypocrisy, too.

Berating Celine about her son's hair.

While, all the while, Ellen herself has a conventionally male haircut. What?

With the entire awkward encounter.

It seems Ellen will hit the lowest blow in order to get a laugh.

Even when it's not that funny...

Ellen delights in putting celebs on the spot.

Who she accused of ghosting her.

That went to Drew Barrymore, who has been open about her lifelong struggles with addiction.

So Ellen came right out with this.

Another fan shared this.

@KevinTPorter @LAFoodBank When I was 15 @TheEllenShow was doing a contest of fans making a bust of her and sending… https://t.co/tkl4xkFaRW
— Danielle Acevedo (@Danielle Acevedo)1584969245.0

Ellen truly does come across as deeply unappreciative of her fans.

The interview that started it all.

"Actually, that's not the truth Ellen."

In the wake of these unearthed clips and toxic workplace allegations...

Ellen has made the decision to address the situation to her fans.

The star spoke out during the opening monologue to the eighteenth season of her show.

The footage was initially posted on YouTube, and then later on Twitter before being shown on the show that evening.

Speaking on the intro, the host said:

"As you may have heard, this summer there were allegations of a toxic work environment at our show and then there was an investigation. I learned that things happened here that never should have happened."

"I take that very seriously and I want to say I am so sorry to the people who were affected. I know that I'm in a position of privilege and power and I realized that with that comes responsibility, and I take responsibility for what happens at my show."

She went on to say that changes have been put in place.

"We have had a lot of conversations over the last few weeks about the show, our workplace, and what we want for the future. We have made the necessary changes and today we are starting a new chapter."

Speaking on the press coverage around her not being who she appeared to be on the TV, she said: "I became known as the 'be kind' lady."

"And here's how that happened: I started saying, 'be kind to one another' after a young man named Tyler Clementi took his own life after being bullied for being gay. "I thought the world needed more kindness and it was a reminder that we all needed that, and I think we need it more than ever right now."

"Being known as the 'be kind' lady is a tricky position to be in. So let me give you some advice out there if anybody's thinking of changing their title or giving yourself a nickname, do not go with the 'be kind' lady. Don't do it."

She continued by saying she is working on herself.

"The truth is I am that person that you see on TV. I am also a lot of other things. Sometimes I get sad, I get mad, I get anxious, I get frustrated, I get impatient, and I am working on all of that."

Her statement comes after Warner Bros. Television announced that 3 senior producers had exited The Ellen DeGeneres Show after an investigation.

The show has reportedly been investigated following allegations of racism and sexual misconduct in 2 BuzzFeed News articles, in which past and present employees of the show claimed they faced racism, fear, and intimidation.

After watching the clip, viewers had some strong reactions.

And many still weren't happy with the star.

Some have lost all trust in the star...

But now, the footage has reached a body language expert.

And they had a lot to say on the matter.

He explained, "She was joking and trying to keep things jolly but her hand actions give you all you need to know about what was going on inside her head and if she has actually done any of the stuff that has been reported."

"Ellen has been named in the media, accused of certain things, this is her speech to the public - saying 'we are back'."

"You would expect someone in her position to be a bit self-absorbed, anyone in the top position has to have a bit of that about them."

"She's already thinking 'I hope this goes well', this is a bit of self sooth."

"She's trying to be jovial but she's very aware of the downside about getting that wrong but why would she be bothered about it if she hasn't done the things she's accused of?"

"She knows she's under pressure and is expected to deliver. Can she convince the public that she's trustworthy?"

"She's trying to block out that negative experience for her. There's repitition of the eye block when she's talking about the toxic atmosphere at the show."

"She's trying to lull the people she's talking to into an empathetic connection with her. She makes it clear it's her show with her name on it."

"I think it would be more authentic and believable if you name it, forget about the jokes and trying to make people laugh, and just name the issue her."

"Any firm lack of what she's being accused of is missing."

"She's trying to use humor as a tool to bring us back on board."

"She mentions that 'be kind to yourselves and others' but when she's talking about it she licks her lips and that means adrenaline has kicked in and she's getting ready for some kind of engagement."

"What other narratives have gone on behind the scenes? Is she trying to protect that image?"

"She's trying to be confident and display humor but her body language is giving her away. She's talking about being the 'be kind lady'.""

"It's a big indicator that she feels really uncomfortable."

"She's trying to use humor to disguise what the main topic is that she should be devoting time for."

"She's trying to scale that up while what's going on with her show is small and fluffy."

"If this is an apology video it's a terrible attempt. It hasn't got the right tone or focus. It misses the mark totally for the people who have been affected negatively."

"It was terrible and there's enough [...] to say that Ellen knows a whole load more and more about what went on behind the scenes but is saying 'we've talked about it now so let's move on'."

Watch the full monologue below.