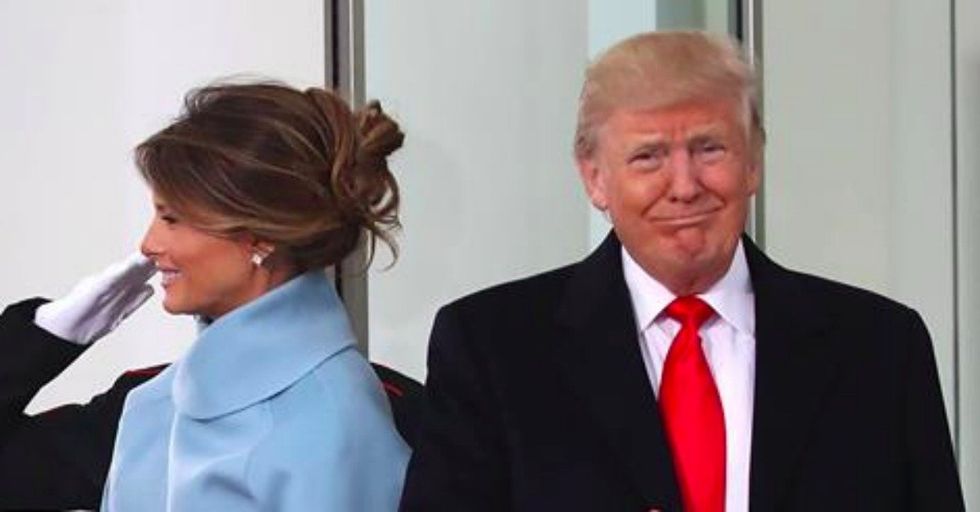 If you watched the presidential inauguration and noticed President Donald Trump and his wife Melania's relationship seemed a bit off, you're not alone.

This clip, has gone insanely viral, and shows some definite signs of weirdness between the two of them.

Nothing escapes the Internet, and quickly a "Sad Melania" meme that's half humor, half genuine sympathy swept over the web.

People quickly began to compare the Trumps body language to that of the Obamas, highlighting the gentlemanly behavior of Barack Obama compared to President Trump.

Many commented on how Trump went to greet the Obamas on his own, leaving Melania behind, still sitting in the car.

In an interview with, Mic body language experts explained that, "behavior like this could be one of many signs of an unhappy relationship." "If you didn't know that they were married, you wouldn't know that they are married," said communication and body language expert Susan Constantine. "Not only did he not wait, he went up the stairs and greeted the Obamas,"body language expert Patti Wood added. "He didn't even look back to see if she was there or help her up the stairs." In contrast, the Obamas were quite loving to each other, which was all the more obvious seen next to the behavior displayed by the Trumps.

The Obamas appeared to genuinely enjoy each others company, and Barack had Michelle's back when things got weird.

When Barack noticed Michelle  seemed uncomfortable holding the gift Melania gave her, he whisked it away and took care of it for her. "It's a great couple moment, like, 'Oh, honey, I'll take care of this for you,'" Wood said.

On the steps Barack grabbed Michelle's hand and kissed it.

"It's a very tender moment," Wood said. "It seems spontaneous." Donald Trump, gives a small nod to Melania but doesn't touch her. "Melania is an object to [Trump]," Constantine said. "I don't see any warmth or true love and compassion in that relationship whatsoever." As for when the Obamas meet, "they meet through their eyes," Constantine said. "Their bodies are parallel. There's a lot of genuine warmth and love between the two."

Experts also analyzed the Trumps' body language during the first dance at the inaugural ball.

Wood pointed out that Melania leaned away from her husband as they danced. "That typically says, 'I don't want to merge with you as a partner,'" Wood said. Meanwhile, Donald is "pulling her in sexually," touching her pelvis to his. "As they held hands and danced, she held her fingers out straight — a small sign that can demonstrate a lack of affection," Wood said.

Why does this matter?

If he was just a reality TV star, it wouldn't matter as much, but he's the President. As Mic reported, "Wood pointed out that Trump doesn't generally change his behavior or body language when in different situations, so the timing here is important: Trump's public behavior while masses of women gathered to protest his office suggested he didn't care about or think much of his opposition." Wood called attention to the fact that his behavior is also very consistent, which, "can also read as authenticity," she said. "He's the same wherever he is, in whatever situation he's in." For better or worse.