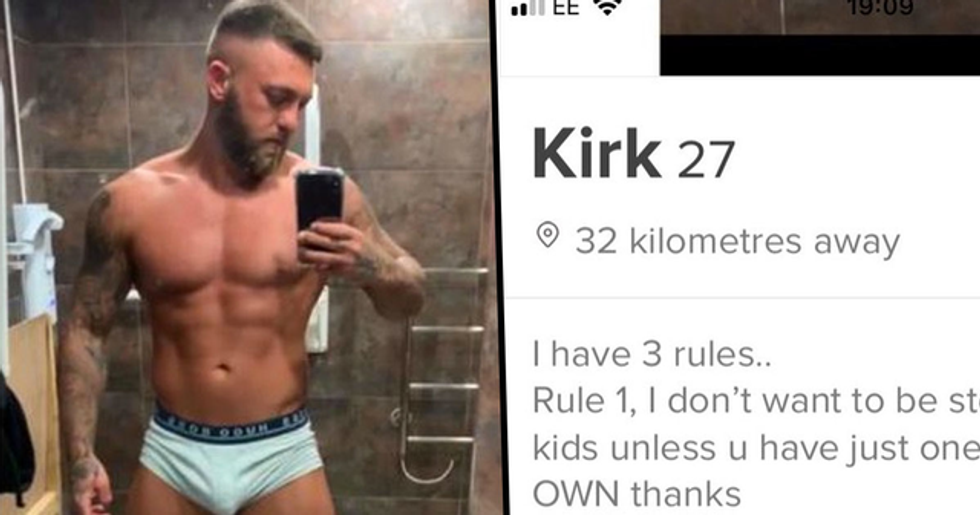 But one particular profile has sparked outrage this weekend as one man set his three strict "rules" for his potential dates. Many have branded the man's profile as "trash" - and some even see it as being emblematic of the issues with Tinder and other dating apps.

The profile's "rules" aren't the only thing that some have taken issue with, though. The rest of his profile information (plus his bizarre choice of photos) truly has to be seen to be believed, and the internet has offered some truly excellent responses. Keep reading to find out more!

Behaviour on Tinder is often a little questionable.

It seems to encapsulate the many things that are wrong with Tinder all in one go - which is actually quite impressive, in a really depressing way...

Here's the guy in question.

His picture alone is pretty problematic. That's a really bizarre lack of clothing... But, honestly, it gets so much worse.

Many view semi-naked images as an immediate red flag.

Indeed, it does seem a strange way to try to get others to like you. Generally, if you wouldn't do it in the street, don't do it on Tinder.

But the pictures are just the tip of the iceberg.

It's the content of this Tinder profile that has really got the internet talking. Poorly chosen photos are pretty common on the app, but this guy's dating "rules" are what really made the profile stand out.

There's a lot to unpack here - and the internet did a great job at pointing out the (many) areas in which this guy is being, quite simply, the worst.

This is genuinely one of the most offensive profiles we've ever seen.

And, when it comes to Tinder, that's a particularly impressive accolade. From racism to sexism, this profile really has it all.

She posted both the Tinder-user's image and his horrific profile details, claiming it had totally "put [her] off dating."

People initially reacted to the picture.

And we can't blame them! It has to be one of the strangest profile pics we've ever seen. He somehow manages to be naked and clothed at the same time. It's making us feel a little uncomfortable...

The background of the image also garnered some attention.

People couldn't figure out whether he had strange taste in interior design or had decided to get semi-naked in public. To be honest, neither is particularly great.

Many also noticed some strange wording on his profile.

While it's likely that he intended his "good luck" message to mean that he's pretty picky when it comes to Tinder matches, many saw it more as a warning.

Some had other questions.

We were wondering the same thing...

Some were strangely pleased that the profile had been unearthed.

It's a handy reference point for all the things that people do wrong on Tinder, plus it's a shining guide to how to act like total trash.

But others made an interesting point.

While this guy is clearly not a particularly great human, it's the landscape of Tinder that makes people think that this sort of behaviour is normal or acceptable.

However, it still left some feeling sheepish.

Many thought the phrase "toxic masculinity" sprang to mind upon reading this gross profile - and felt the need to distance themselves from his views.

And some had a more succinct reaction.

We're just curious as to whether this guy has ever found a match through the app - and we wonder what his response would be to the online roasting he's received...