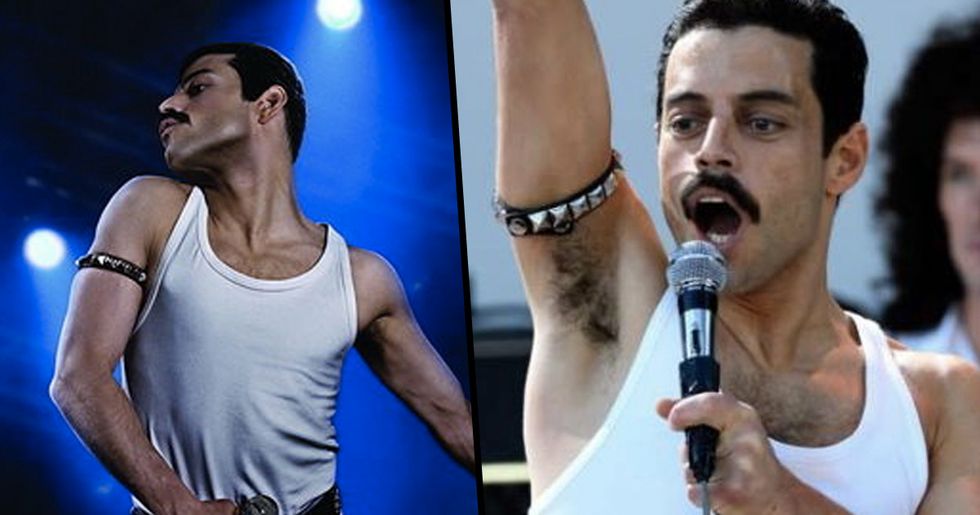 It may have received mixed reviews from critics, but Bohemian Rhapsody is the champion of the box office.

The Freddy Mercury biopic has been a colossal hit around the globe, delighting established Queen fans and garnering more listeners for the iconic rock band.

Starring Rami Malek, whose received universal-acclaim for his performance, the film has reached a huge box office milestone and is deserving of all the plaudits it gets.

In fact, Bohemian Rhapsody is now the biggest music biopic ever

Its massive worldwide gross of $539,564,825 is the culmination of $164.5 million at the domestic box office, plus an impressive $375 million from the foreign market.

Clearly, it's not just Brits and Americans that are fascinated by Mercury's life story.

Five weeks on from its release and the movie is still reeling in the dough.

It's even topped 2015's Straight Out of Compton.

Previously the highest grossing music biopic, the story of groundbreaking rap crew N.W.A only bought in $201 million in comparison.

It also left Walk the Line in the dust.

There's rumours it might top The Crimes of Grindelwald .

By mid-December, it's estimated Bohemian Rhapsody will have earned a whopping $600 million over all.

It may also beat out Mamma Mia! for the title of second biggest live action musical of all time.

It'll never reach the number one spot though, that belongs to 2016's live-action remake of Beauty and the Beast.

What are the reasons behind the movie's record-breaking success?

Rami Malek's performance probably has a lot to do with it. Although critics were divided on the film itself, they all praised the 37-year-olds portrayal of the rock god.

The Mr Robot actor spent a year transforming into the Queen frontman.

Malek particularly focused on projecting Mercury's attitude and the way he carried himself.

He also worked with the movie's producer Graham King to develop the technical skills required for the part.

This included singing and piano lessons.

But what Malek says was most important was capturing Mercury's "spontaneity."

Speaking to Cinema Blend, Malek said: "The man's not choreographed. Every time he steps out onto a stage, no one knows what he's going to do, and that's what I knew I needed to tether myself to. In order to do that, I realized, I can't work with a choreographer, I need someone to help me with movement, someone to help me discover the impetus for why he does what he does."

Brian May has since suggested that Malek should get an Oscar nomination for the role.

The Queen guitarist said of Malek's portrayal: "He's incredible. Without doubt, he'll be on the nominations list for an Oscar... He inhabited Freddie to the point where we even started to think of him as Freddie. Really remarkable."

May lauded not only Malek's depiction of Mercury's musical prowess, but also his sensitive side.

The whole band were heavily involved behind the scenes of Bohemian Rhapsody.

However, the film has been criticised for erasing "straight-washing" Mercury's sexuality.

Mercury's relationships with men were only briefly mentioned in the biopic, with filmmakers choosing to focus on the singer's relationship with girlfriend Mary Austin, played by British actress Lucy Boynton.

And Malek seems to agree.

He told The Hollywood Reporter that they had wanted to delve deeper into Mercury's personal life, but they only had two hours to tell the story.

In the interview, he said: “In those two hours I know that those men want to celebrate Freddie’s life, and there was definitely a cognisant effort not to make this a hedonistic, salacious film."

“I think we all would have loved to show more of Freddie’s relationship with Jim [Hutton] toward the end of his life. That relationship was absolutely gorgeous, and if I had it my way, boy, would I love to tack on another hour to this film and fill in a few gaps."

Instead, Malek says the band chose to focus on highlighting the "stereotypes Mercury destroyed."

“It’s never going to be perfect in fulfilling the story of a man who we could make countless documentaries about and countless miniseries about," he explained.

Either way, the film's release has put the spotlight back on the band's music.

Queen's hits are back in the Billboard chart, thanks to Bohemian Rhapsody introducing a new generation to the band.

The same thing happened in 1992 with the release of Waynes World .

Thanks to that incredible scene where Wayne and his pals mime/head bang along to 'Bohemian Rhapsody' in the car, a suggestion put forward by Mike Myers himself.

Sadly, Mercury died a year before the Wayne's World's debut.

But May says Mercury would have loved the tribute, and Myers even ended up making a cameo in Bohemian Rhapsody.

So, with legendary tunes and a star like Malek, why the bad reviews from critics?

Variety described the film as "conventional, middle-of-the-road, cut-and-dried, play-it-safe, rather fuddy-duddy old-school biopic, a movie that skitters through events instead of sinking into them."

While The Guardian gave the film two stars out of five.

Film critic Simran Hans called the script "tame" and pointed out the timeline regarding Mercury's AIDs diagnosis was factually inaccurate.

It is believed Mercury was diagnosed with HIV in 1987, at least according to his boyfriend Jim.

However, the film shows Mercury informing bandmates of his illness ahead of Live Aid, which Hans says is a "grapsing attempt to give the  concert, and therefore the film, additional meaning."

IndieWire even went as far as giving the biopic a one star review, blaming the band's interference for the movie's downfall.

Or as reviewer David Ehrlich put it: "May and Taylor were part of the creative process from the very beginning, and it shows: 'Bohemian Rhapsody' purports to take us behind the music, but the film is so sanitized — so eager to share the credit, and so sheepish to assign the blame — that it often feels like a network TV version of a story that tries to celebrate people for refusing to sand off their edges."

Although, there were some positive reviews. CNET praised the inclusion of Austin, claiming that without her presence, Mercury may not have "fully explored his talent or come to terms with his sexuality."

Critic Patrick Holland said: "Boynton brings a contemporary perspective to Mary that allows her to be a supportive muse, partner and friend who has enough emotional strength to show Mercury who he really is, even as he breaks her heart with his philandering."

And any review aggregator will tell you that the fans loved it.

Although the critics score on Rotten Tomatoes languishes at 62%, the audience score is an impressive 91%. While Metacritic's average is a measley 49%, the viewer score rests at 8.3 out of 10.

And fans have been taking to social media non-stop since the film's release to praise the movie and prove the critics wrong.

So, it'll come as no surprise to hear that studios are now lining up biopics of other iconic musicians.

According to UCR, Universal Pictures have purchased the rights to the life story of legendary singer-songwriter Prince, who passed away in 2016, in the hopes of emulating the success of Bohemian Rhapsody.

And next year music lovers can look forward to the Motley Crue biopic Dirt, as well as Rocketman, the story of Elton John.

Arriving on 22nd March and 17th  May respectively.