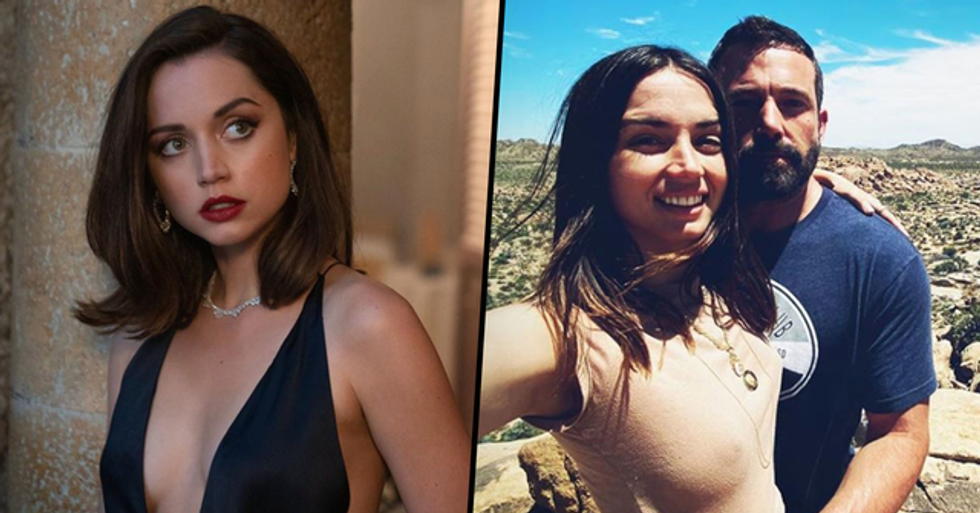 After a turbulent history with romance, Ben Affleck has seemingly found love again.

But it seems not everyone is so keen on his relationship with Ana De Armas.

Ben Affleck's current girlfriend Ana de Armas is a star in her own right.

But it seems as though some aren't so keen on the pairing...

Ben Affleck has had quite the experience when it comes to romance.

The actor and filmmaker has constantly been in and out of the headlines with his explosive love life.

He has a rather lengthy list of A-list lovers...

I suppose that's what happens when you're Batman, right?

His first A-list romance was with Gwyneth Paltrow.

The pair met at a dinner party thrown by the notorious Harvey Weinstein in 1997, and they started dating soon after Paltrow ended her engagement to Brad Pitt. The rebound of the century, right?

And, despite ending their relationship after 3 years together...

They apparently remain firm friends today, with Paltrow revealing in a 2015 interview with Howard Stern that she "likes him" and is "still friends with him."

And then there was JLo.

Shortly after things ended with Paltrow, Ben struck up a high-profile romance with the actress and singer, Jennifer Lopez.

The world became obsessed with the couple.

But one week before their wedding date, the couple postponed their wedding “due to the excessive media attention." And, in early 2004, Lopez confirmed to the media that she had called off the engagement.

Ben found himself to be single once more.

But then, along came a different Jennifer.

Perhaps his most prolific relationship was with actress, Jennifer Garner.

Just 9 months after his very public break-up with JLo, Ben and Jennifer Garner were seen out and about together at a Boston Red Sox World Series Game.

But Ben had fallen madly in love...

And, in 2005, the pair tied the knot in a private ceremony in Turks and Caicos.

Many believed this marriage was the real deal.

And the couple went on to have 3 children together - Violet, Samuel, and Seraphina.

But it wasn't meant to be.

After been together for over a decade, Ben and Jennifer separated in 2015 and finalized their divorce in 2017. Rumors of Ben's infidelity were flying but, to this day, he profusely denied being unfaithful.

Ben took the breakdown of his marriage badly.

“I drank relatively normally for a long time. What happened was that I started drinking more and more when my marriage was falling apart. This was 2015, 2016. My drinking, of course, created more marital problems," he explained to the New York Times.

And he has been incredibly vocal about his regret regarding the divorce.

“The biggest regret of my life is this divorce," he continued. “Shame is really toxic. There is no positive byproduct of shame. It’s just stewing in a toxic, hideous feeling of low self-worth and self-loathing."

But the Good Will Hunting star found love again.

After years of personal struggles, Ben's back in a relationship - sorry, ladies.

Ben and Ana first met while playing a married couple in the psychological thriller, Deep Water, but reportedly maintained a professional working relationship on set. But they were rumored to be dating back in March, when they were spotted kissing at an airport. A source later told People Magazine, "They are definitely dating".

The relationship has been officially confirmed by the pair.

Ana shared this snap from Cuba.

And she shared a series of cute couple photos of her and Ben from the celebrations, with the caption, "Thank you all so much for the birthday wishes and love! Cheers to another great year."

They were seen kissing and embracing in the snaps...

And appear to be incredibly loved up.

In fact, that's one thing Ana and Ben have gained a reputation for.

The couple are known for there slightly bizarre candid snaps.

They literally always look in their own little world.

Which is kind of sweet, we guess.

But not everyone thinks so.

In fact, the filmmakers of Ana's latest Bond movie are not fans.

So much so, in fact, that they've reportedly banned Ben from attending the premieres of No Time To Die.

"This film premiere has been a long time coming and franchise bosses want the spotlight to be on the stars of the film."

"It would be a disaster if it was all about Ben’s mushy PDAs with Ana overshadowing the event," a source told The Sun.

"A circus sideshow is strictly off the menu and the head honchos want to keep it all on-brand."

But anything to ensure all eyes stay on Bond, right?

Want more controversy from Ben Affleck? Scroll on for the off-color joke that landed him in hot water...