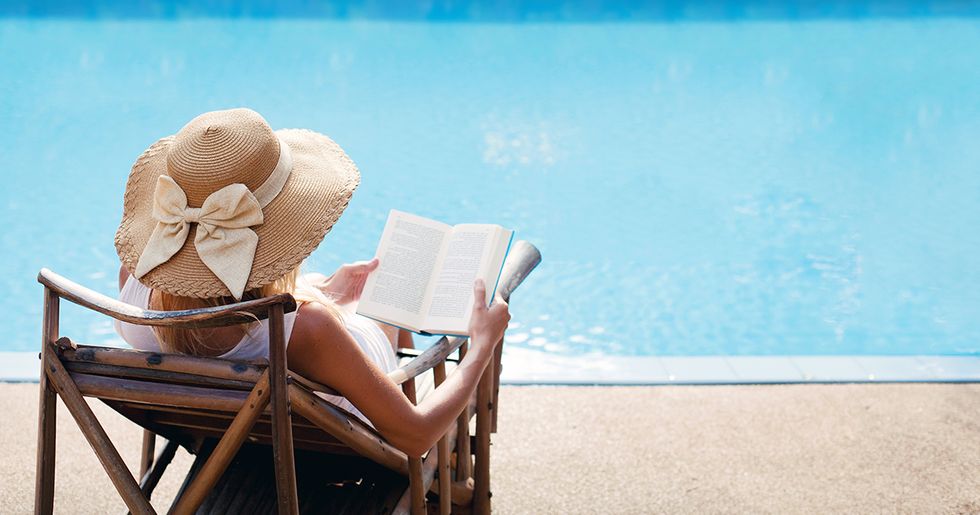 30 Novels That Will Seriously Change Your Life

Sure, some people look down on people who only read pretentious books. It definitely comes with people judging you. Luckily, if you are reading this list, you probably don't care!

Read on to find out which books will literally change your very soul, and will not allow you to pick up anything less than pretentious for the rest of your life. You are so welcome.

The Secret History By Donna Tartt

A group of friends are brought together by their teacher, and through the teachings of philosophy, classical novels, and coming to understand the gods they try to decide if they are above morality. They are a part of a murder scheme, and they actually think what they are doing is okay.

The Raven Cycle By Maggie Stiefvater

A story about magic, love, and loss, this book follows five friends that are sewn together by the past, their present, and the future. Between people trying to kill them, and the gang trying to resurrect the dead, their philosophies and love for the supernatural will leave you searching for dead kings.

I'll Give You The Sun By Jandy Nelson

A book that reads like poetry, this follows a brother and a sister that are torn apart by their mother's death. While one sibling tries to reconcile, the other is busy becoming self-destructive. It's painful and beautiful all at the same time.

The Iliad By Homer

The greatest epic of all time, this story talks about the wrath of the hero Achilles. A war that many know well thanks to Hollywood, the beautiful story is painted with war, love, and of course, the gods.

A very intense story, this follows the high school education of a number of students who are dealing with their own mental demons. It is tragic, destructive, and everything they say is painful and pretentious.

On The Road by Jack Kerouac

A defining work in Beat Culture, this piece of literature is a must for anyone who wants to read about the man who gave birth to pretentious writing. A legend in his day and now, it is like reading history.

This is a work that teaches people about men, even though it is called women. Living inside the mind of a drunk, we see how one man views himself, the world around him, and how he feels about women.

The Aeneid By Virgil

An epic that talks about the beginning of Italy, this story takes place right after the battle of Troy, in which our hero journeys from the rubble of Troy to his new kingdom. The gods once again play an important part, forever concerning themselves with humans.

Crime And Punishment By Fyodor Dostoyevsky

The book focuses on the struggles of Rodion Raskolnikov, who is dealing with enough mental issues that he is considering committing murder for money. The story is about a man who wants to go from poor to rich, something that many modern folks can still relate to.

One Hundred Years of Solitude By Gabriel García Márquez

This is the story of a family in Columbia, who live under the rule of the patriarch. It is told in a beautiful magical way. And it has become one of the main novels that are taught to students in order to look at the themes it presents.

The story takes place in a dystopian parallel universe to our own that has enough religious references to make your head spin. One of the most amazing ideas is the fact that every sacred place exists in a separate reality to what we know.

This story is, of course, a parallel of The Odyssey. The character of Leopold Bloom is a perfect modern Odysseus, from how he thinks, to the actions that he makes. Structurally, the stories are told in a similar fashion as well.

The Foxhole Court By Nora Sakavic

A triggering book for many, but an important one. This book deals with the importance of recovery, how to help yourself and the people around you. It is about second chances. It is about growing up.

Six Of Crows By Leigh Bardugo

Six bandits are brought together to win their favorite prize, money. Though it starts with disagreements, they form a bond that is very much like a family. Though they are all teens, their speech reminds people of adults, and they act like it too.

The oldest epic tale, older even than the Bible, this is the story of the first hero. Although not many people were fans of the movie that starred Angelina Jolie, every classical lover should start with this book.

Everyone is curious as to what happens after they die. This is the book that brings it all to light. Dante is known for being one of the greatest writers of all time, and it is clear to see why when you dive into this book.

The Odyssey By Homer

After Troy has fallen, our great hero Odessyus trails to sail home and is put off his journey for years. He goes through many trials and only makes it through because he is the smartest man in the world. But he loses a lot along the way.

War And Peace By Leo Tolstoy

The novel goes through the history of Russia while it was being invaded by the French. It goes through the suffering under Napoleon and is told from the point of view of five aristocratic families. And aristocracy and pretention go hand in hand.

The story of Lucifer's fall, the battle of heaven, and the aftermath of the entire thing. It is a tragic story, in which the reader comes to understand Lucifer's side of the story, and one has to figure out if they side with God or the Devil.

The Goldfinch By Donna Tartt

As one follows two boys in their adventures to become men, it is as heartbreaking as one can imagine. They question life, death, and everything in between. They take nothing for granted because they are so used to losing everything.

The Handmaid's Tale By Margaret Atwood

Set in a dystopian era, the book tells a tale about women who live under the rule of men--which is not something that is hard to imagine. They try to gain back their rights and independence but find that it is much harder to do than they realize.

When Canada, The States, and Mexico come together as one, they are allowed to replace traditional names with corporation names. Corporations actually take over so much, that Canada becomes a wasteland and there are everlasting issues on the border.

If We Were Villains By M.I.Rio

Inspired by Shakespeare, these college students take their mentor's plays a little too seriously. They use tragedy as their muse and revolve their entire lives around it. It leads to heartbreak, death, and sexual awakenings.

What Is Yours Is Not Yours By Helen Oyeyemi

A book that is a little less serious in terms of writing, it is structured around keys. There is a key for three things: house, heart and a secret. The keys are what unlock secrets to people's lives and give them an insight into what awaits them.

A Little Life By Hanya Yanagihara

The novel follows four friends who are faced with tragedy, self-discovery and terrible situations. They have to deal with health issues amongst various other problems that send some of them spiraling. It is a book that deals with heavy subject matter, so be careful!

All The Crooked Saints By Maggie Stiefvater

A family that was born and made from miracles, they dabble in that same magic. They are healers but teach people that people who need help also have to heal themselves. This book brings you to the middle of the desert, where you get to face your own inner demons.

The Catcher In The Rye By J.D. Salinger

Near Hollywood in 1951, the rebellious Holden Caulfield is trying to deal with the loss of many things, and trying to regain many things. The book deals with everything from losing your innocence, to trying to figure out who you are and trying to make connections along the way.

While this book is a lot about love, it is also a lot about revenge. Heathcliff is a mysterious man who is living as a servant, who runs away from his life. When he returns, he is rich and decides to get revenge on the people he thought took part in ruining his life.

This story speaks of the spiritual, religious and intellectual birth of Stephen Dedalus, who is, in the story, the alter ego of Joyce himself. Of course, it is also parallel to the mythological Daedalus who was known for his craftsmanship.