Bookstore Is Filled With Kittens Looking for Forever Homes | 22 Words 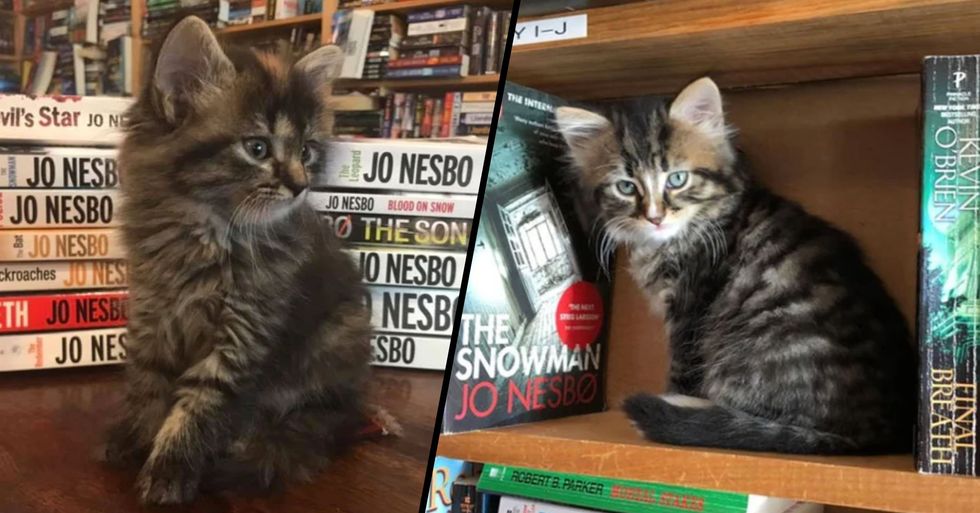 Bookstore Is Filled With Kittens Looking for Forever Homes

Kittens and books... There's really no better combination, is there?

Well, one bookstore has this idea down to a T, and have subsequently filled their shelves with both books and rescue cats and kittens who are in search of a loving home.

Keep scrolling for the full details, or to see some simply adorable photos of kittens sat on books... It's up to you.

We all love a good bookstore.

And if you say you don't, you need to put down your iPad and stop lying to yourself.

And we all love cats.

Again, if you say you don't, you need to seriously stop lying to yourself.

There would be a bookstore filled with cats... Right?

Well, it turns out that there actually is a bookstore that sells a little more than just books...

A number of homeless rescue cats and kittens, all in search of a loving home, also inhabit the bookshelves of this particular store.

It seems too good to be true, I know.

Otis & Clementine's Books & Coffee is a little different from your usual bookstore...

The store, which is based in Nova Scotia, Canada, provides shelter for a number of different rescue cats and kittens.

It all started when the shop's owner started fostering cats and kittens.

Ellen Helmke started a feline fostering programme last year, and she decided to intertwine her new commitment with her business.

And it's been a roaring success.

It turns out that people love cats just as much as they love books, and Helmke has noticed an increase in customers since the felines moved in.

Some customers even come just for the cats.

Because who wouldn't?! "People come here specifically to see the cats, and then some people just wander in to look at books and discover there are kittens," Helmke explained in an interview.

There's a mixture of cats and kittens amongst the books...

Helmke told Narcity in an email that in the store they typically "have several kittens and usually a mama cat as well."

While browsing for books...

Customers can sit back, relax, and play with the cats.

And, of course, the kids love it too.

Helmke has reported that several parents have told her that their children, who were once reluctant readers, now show more of an interest in books thanks to the presence of the kittens.

Because what better way to make kids like books than hoodwink them with cute cats?

And the cats benefit from all the human interaction, too.

Helmke noted that being around customers helps the cats and kittens learn how to socialize with people, which ultimately makes it easier for them to get adopted.

And, if a customer is truly to fall in love...

They can adopt a cat or kitten through the store.

Helmke reports that their adoption rate is staggeringly high...

"We have a hundred percent adoption rate, which is fantastic," she said. South Paw Conservation Nova Scotia manages the adoption process, which costs $255 Canadian dollars ($194 U.S. dollars). A good price for unconditional love, don't you agree?

But you don't have to adopt the kitties...

Though resisting the urge to take one of these little guys home may prove to be difficult...

Just look at his face.

The fostering programme ran through the store has proved to be a huge success...

And many delighted customers have taken to social media to express their delight over the scheme. "What a wonderful story. You have to be terrific people for taking in these kittens. I have to make a point of visiting soon," one person wrote. 'Thank you for what you do."

Be right back, just heading to Nova Scotia...

You had me at "books and kittens". For more on unique methods of animal adoption, keep scrolling to read about the quirkiest animal shelter...