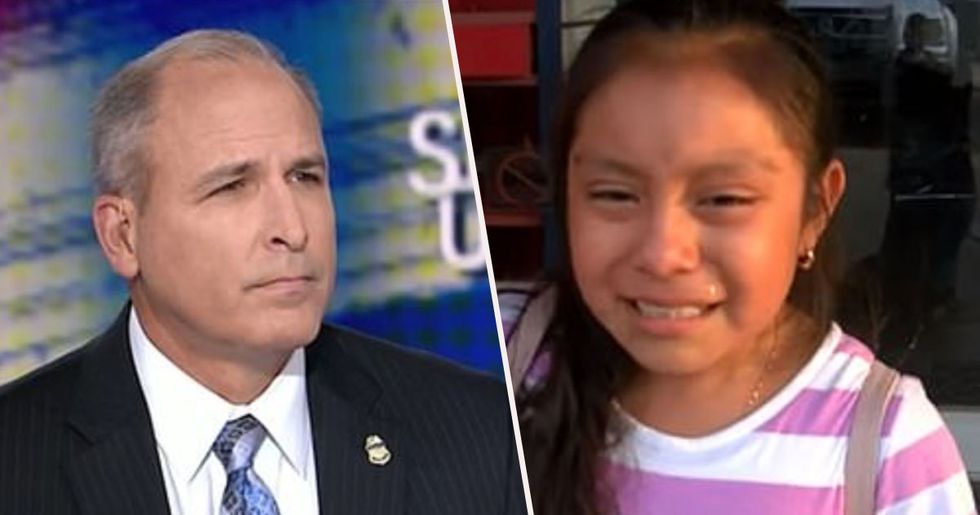 The current state of America seems to be deteriorating as we speak. In the wake of back-to-back mass shootings, the country is still grieving the loss of over thirty-one lives, but it seems as if the Trump administration is over it. It's back to business as usual, as the government ordered a raid on undocumented immigrants in the state of Mississipi, removing over 600, primarily Mexican, people from the area.

However, they claim that the ICE raid occurred at an "unfortunate" time after a terrorist had shot and killed twenty-two people in a Walmart in El Paso. Keep scrolling to see the heartbreaking video of the eleven-year-old girl pleading with the government to let her father go and the border chief's cold reaction towards it...

The country is still grieving the El Paso shooting...

A twenty-one-year-old shooter opened fire on a crowd in Walmart with an assault-style rifle, killing twenty-two people and injuring a further twenty-seven.

The terrorist targeted that particular area because of its large Hispanic population.

This was his response to what he described as a "Hispanic invasion of Texas." In a lengthy document, the shooter outlined his racist views claiming that he was against "cultural and ethnic replacement brought on by invasion."

He also decided to express his admiration of fellow terrorist who shot and killed forty-nine people in Christchurch.

The shooter was inspired by the terrorist in New Zeland that videoed and live-streamed the entire slaughter across social media platforms in order to show people what he was capable of.

That's the kind of evil we are dealing with.

The state, as well as the country, was left devastated by this horrific mass shooting in El Paso, but it seems as if the president and his team are well and truly over it.

The Trump administration ordered a mass immigration raid only days after the attack.

Just hours away from El Paso, in Mississippi, officials were carrying out the process of removing undocumented immigrants, primarily from Mexican descent, from the state.

They targeted seven food processing plants, where workers were arrested and detained and are awaiting their fate.

Bear in mind, this occurred while emotions were raw after the attack on their community.

Hispanic people up and down the country were left terrified after they were targeted by this terrorist. A place that they thought was going to be the land in which they could fulfill their dreams is slowly becoming their worst nightmare.

And now the government are on their backs while they grieve.

I can almost hear the bigots in the back shouting about that they "should have never come here illegally in the first place." Statements like that can only come from the mouths of those who have never been oppressed. Imagine being trapped in a warzone where you and your children can be killed at any given moment - you'd do anything to bring about safety for your family, even if that means dragging yourself across that dreaded border.

This is not a political point of view, this is common, human decency.

The reason that America is slowly falling into this pit is because we seem to lack basic human emotions such as compassion and empathy. Instead, we're so caught up in the political aspect of every statement that we make, that we forget that there are more important things.

The Trump administration has defended their actions, claiming that the timing was just "unfortunate."

It's such a coincidence, don't you think, that on the day that the president was going to visit the victims of the El Paso shooting, there was also the largest single-state immigration raid in U.S. history taking place in Mississippi? Did you think we wouldn't notice, Mr. President? You have to be pretty damn heartless in order to defend these actions.

And after an emotional video has emerged online, we now have proof of how heartless the administration really is.

On their first day back at school, children, who were waiting for their parents to come and pick them up, had the news broken to them that their parents had been arrested and taken away by ICE.

One little girl couldn't help but break down and beg them to bring her father back.

In an emotional plea, the young girl with tears streaming down her face tries to make a case for her dad, who was one of the 700 affected by the raids in Mississippi.

In the video, she sobs and asks the government to show some kindness by releasing her parents. She also tells them that Hispanic people "didn't steal nothin,'" probably referring to the disgusting stereotypes hurled towards the community.

This act has, yet again, divided families.

Parents have been separated from children and are being held in "detention centers" all over the country while they await their fate, with no idea if they will ever be able to reunite with them before they are deported.

The acting Customs and Border Protection commissioner acknowledged the video of the eleven-year-old.

On CNN, Mark Morgan, border chief, expressed that the video was purposefully "emotional" to paint a certain kind of picture, but "her father committed a crime" so necessary actions must be taken in order to rectify this.

He also mentioned that the little girl was reunited with her mother shortly after the video was shot.

But there was no indication as to where her father was or how long it was going to be until she would see him again.

The video has been watched over a million times...

And there seems to be one opinion that's sweeping the majority. None of the employers, who had illegally hired these undocumented citizens, were reprimanded for their actions, just the ones who were exploited. A classic scenario.

"You think that just because you sit high on your 'pedestal' that you're entitled."

How can you just sit there and watch these poor children experience such terror from ICE raids taking their parents… https://t.co/WpsMuMxpT6
— 𝔼𝕝𝕚 (@𝔼𝕝𝕚)1565430777.0

It truly is disgusting.

The country has bigger problems than immigration at the moment...

But it seems as if that's all the president is worried about. On countless occasions, the president has been asked if he plans on tightening the laws around gun control in order to avoid events such as the El Paso shooting from occurring as frequently as they have been doing. But there seems to be no indication that he will even speak about the issue.

And what do you plan to do with all the people trapped in cages at the border?

Because that seems like a problem with literally no solutions. There are so many humanitarian laws being violated, but no one bats an eyelid because the president's tactics seem to be working. We're all fearful of one another. We're all divided. And we demonize those who are advocating for change.

I mean, he's already blamed video games and Obama for our problems, what else is there left?

It's no secret that video games are violent, but, that being said, studies have disproven the theory that they breed mass shooters.

And who knows why Trump decided to bring Obama into this.

The heat must really be getting to him if the only thing that he could tweet after back-to-back mass shootings is a quote expressing that Obama got a "free pass," during his time in office. Thanks for that, Mr. President, nice to see you've got a soul.

If you want someone to blame, don't blame immigrants, blame the president.

After preaching so much hate and publicly demonizing minority groups, I don't understand why people are looking to the heavens for answers as to why there is a sudden rise in mass shootings throughout the country.

And then he has the nerve to go and "visit the victims."

Here, he is smiling with a "thumbs up" next to a baby who is now an orphan because both the child's parents were shot and killed at the hands of the El Paso shooter. Are there any lines that this president won't cross? If projection polls are correct and he wins yet another term in office, we're surely doomed.

Here's a look at a clip of the little girl, pleading with the administration to let her parents go.

Let's hope that we can change the country for the better. To read a little more about the poor two-month-old baby who lost his parents to the El Paso shooter, keep reading. His parents saved his life in an incredible act of bravery.