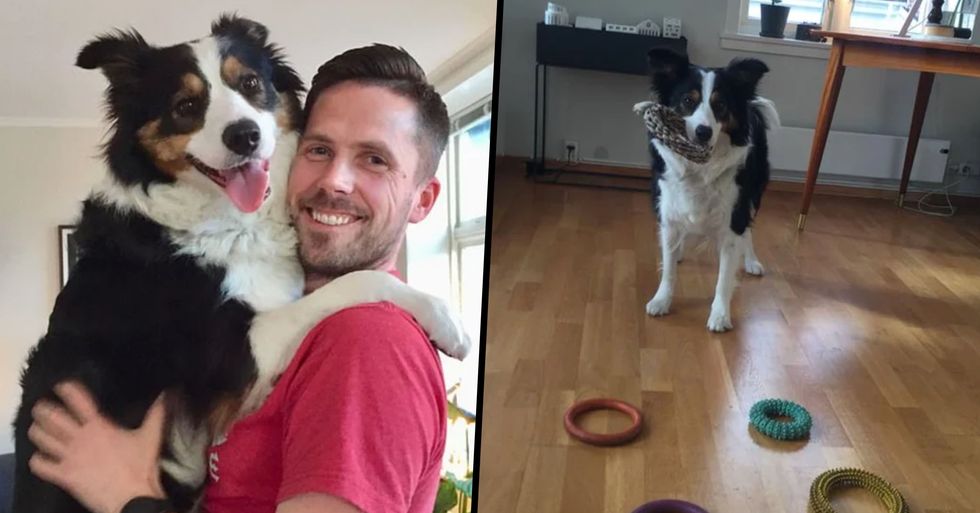 It's no secret that dogs are more intelligent than we give them credit for, but one pooch has been standing out above the crowd.

A border collie has been wowing the internet this week after learning the names of ninety different toys while fetching them on request. But there's another reason why her achievements are so remarkable.

Read on for her adorable story and to watch her in action...

Because, let’s face it, dogs are the most loyal pet you can have.

They're also known for being extremely intelligent.

Our four-legged pals really are smarter than we give them credit for.

Dog training is a key part of being a pooch parent.

And it's not always fun and games.

Whether its house training, teaching basic commands or recall, training your dog is no walk in the park.

But there's one dog who is truly standing out from the crowd this week.

Forget "sit" and "lie down", this clever canine from Norway knows the names of ninety different toys.

She can also fetch them on command. Keep scrolling for the adorable video.

The border collie hadn't been formally trained to learn all the names of her toys, seemingly learning them while playing with her human pals.

This intelligent pooch has learned to differentiate between balls, Frisbees, rings, and ropes.

Her owners refer to each of these toys by both an adjective and a category name - like the "small Frisbee" or the "colorful ring," for example.

When the researchers first met Whisky, she already knew the name of a staggering fifty-nine toys.

But now her owners say she has learnt the names of around thirty-one more.

"At first it was hard for me to believe that a dog learned the name of so many toys, but after several days of rigorous testing, I had to change my mind," explained lead researcher Claudia Fugazza of the Eötvös Loránd University in Hungary.

"We noticed that, among her toys, Whisky had several exemplars belonging to one of 4 categories: she had 10 different balls, 7 different rings, 4 different ropes, and 4 different Frisbees," she added.

They then decided to put Whisky to the test.

Researchers presented her with sets of 4 new toys that she had never seen before - 1 from each of the 4 categories of balls, Frisbees, rings and ropes - finding that Whisky still selected the correct toy on command more often than if it were simply by coincide. And, following this, to make sure that Whisky wasn't selecting the toys based on visual cues from her owner, researchers placed them out of sight of her owner.

Watch Whisky in action below:

"Whisky’s achievements mirror human capacities more closely than typical animal studies in two key factors: the lack of specific training for categorization prior to the tests and the use of words to indicate the categories," explained Professor Miklósi. What a clever doggo! Interested in more wholesome dog content? Keep scrolling to learn more about a pooch who waits every day to get a hug from his favorite mailman.