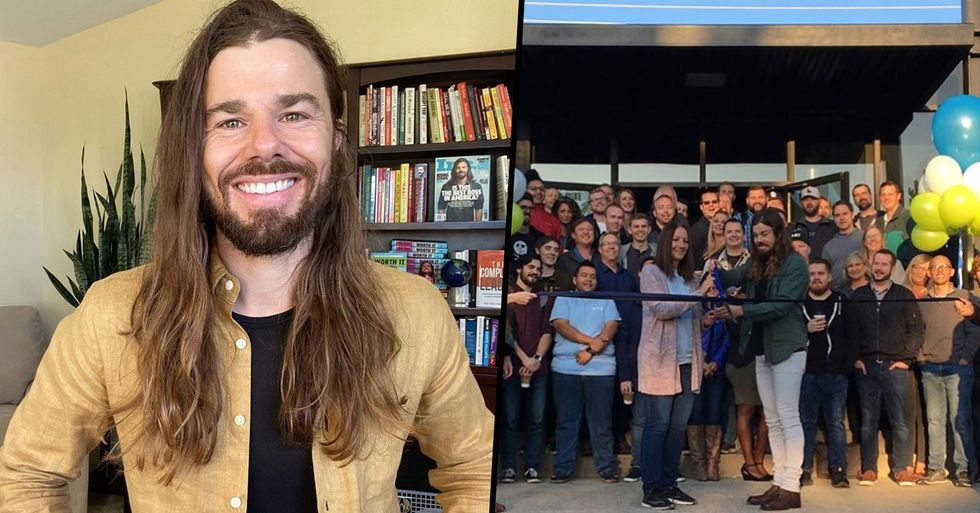 The famous boss who took a $1 million pay cut in order to raise his employee's salaries 5 years ago has tripled his business by doing so.

Is this perhaps the best boss in the world? We think so...

Am I the only one thinking about Jeff Bezos right now?

So many wealthy bosses are guilty of being greedy...

And instead of paying their hard-working employees fairly, they take the majority of earnings for themselves.

But you know what can make all the difference for overworked employees?

A little bit of human connection and appreciation.

And all it takes is a little bit of selflessness... which many bosses are sadly incapable of doing.

But one boss recently proved how putting his employees first actually benefited his business...

And it's safe to say that he's definitely winning "Boss of the Year" this year!

Dan Price is the CEO of Seattle-based Gravity Payments...

And his company specializes in credit card processing and financial services.

Dan founded his company back in 2004 with his brother...

And since then, Gravity Payments has rocketed to success.

But it turns out that there's an unusual method behind this success...

He cut his own wages by ninety percent in order for his employees to start earning a minimum annual salary of $70,000. Best boss ever?

Dan believed strongly in not allowing hard-working employees to not be exploited.

Speaking to The Guardian back in 2015, he said: "People were being exploited. People I care about, who’ve helped me so much, now have more dignity. The distraction of not having enough to cover the basics has gone."

He wanted his employees to live better and happier lives...

And over the last few years, Dan's decision to take a personal wage cut has proven just that.

When he first announced this motive, Dan faced a lot of criticism from business professionals...

Including Rush Limbaugh, who claimed that his business venture would be a "failure." Little did they know...

Since Dan implemented the $70,000 minimum salaries, his business has tripled.

The CEO has seen his company flourish, with business trebling, staff turnover dropping by half, and his employees living better lives.

Dan's company is now even part of a successful case study at Harvard Business School.

Speaking to the BBC earlier this year, he said: "There was a little bit of concern amongst pontificators out there that people would squander any gains that they would have. And we've really seen the opposite."

Dan has noticed a significant "baby boom" in the office since implementing the pay rises.

"Before the $70,000 minimum wage, we were having between zero and 2 babies born per year amongst the team... And since the announcement - and it's been only about four and a half years - we've had more than forty babies."

And how do the employees themselves feel about Dan's methods?

Rosita Barlow, director of sales at Gravity, said: "When money is not at the forefront of your mind when you're doing your job, it allows you to be more passionate about what motivates you. You're not thinking I have to go to work because I have to make money. Now it's become focused on 'How do I do good work?'"

So many bosses out there need to take a leaf out Dan's book...

And speaking of books, his self-help guide on running a successful and selfless business can be bought here. Keep on reading to hear some of the worst boss horror stories out there...