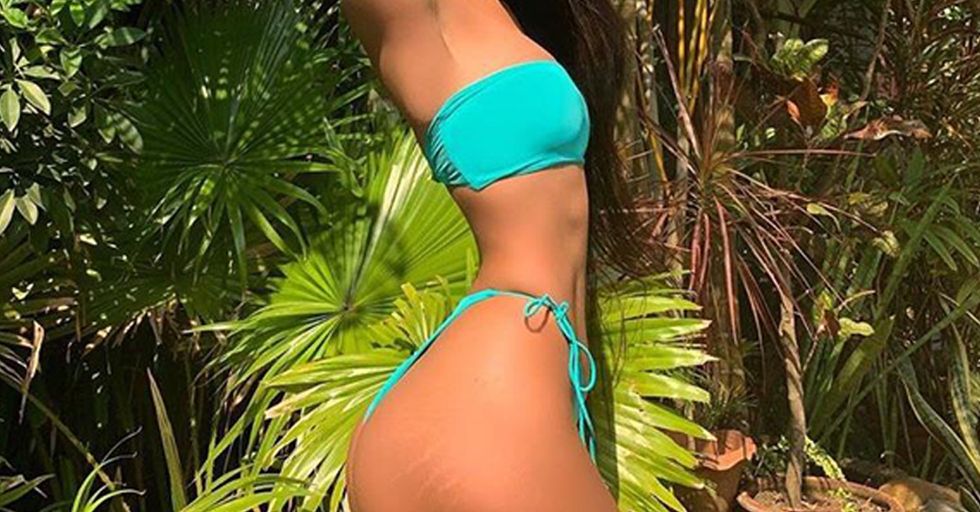 Botched Photoshop Jobs That Defy the Laws of Physics

Most people typically want to present ourselves in the best light possible. There's nothing wrong with that! Some people choose to use makeup to highlight their favorite facial features (and disguise those they don't like as much). Others dress a certain way to accentuate some body parts (or, again, disguise parts they don't wish to emphasize). And then there are people who use Photoshop and other photo editing tools to create a completely new body or face for themselves — some people make a living doing exactly that!

Of course, we all know that the bodies and faces we see in advertising are rarely wholly accurate to what that person may look like in real life. What follows are some of the most egregious examples of people who clearly thought they knew how to use Photoshop...but definitely didn't. You just can't trust any photo these days!

I love that Chrissy Teigen is also calling out the magazine for their questionable editing practices. At least, I'm assuming she is. I highly doubt she actually uses a Sharpie to draw on her nipples.

What exactly is going on here?

I counted this person's limbs several times before coming to the conclusion that they do not have too many of them...it just looks like they do.

Lungs? Heart? Stomach? Who needs 'em! Alternatively, you could consider storing those organs in other parts of your body. Like in the backend.

I am relatively certain that no person's body actually looks like that naturally. I could be wrong, but...well, I'm not wrong.

We all alter images every once in a while. Just don't forget the mirror next time.

There's so much going on here.

I could start listing all of the things that look funky in these photos, but I think it's probably take less time to list the things they did right. Like the hair. The hair looks nice.

If your waist is the same width as your arm, that could probably lead to some medical complications. Then again, I'm not a doctor. Just a person with eyeballs.

Once again, the organs are apparently located elsewhere.

I'm obviously not here to body shame anyone who is very skinny. I'm just here to point out that these Photoshop jobs are creating bodies that are incapable of following the laws of physics and anatomy.

This one starts out OK.

The face looks real! The rest of the body looks like they got it from the PS2 version of Lara Croft from Tomb Raider.

PJs for the whole family!

Is this a person or a boa constrictor wearing a very small human costume? Honestly, I'd believe either answer at this point.

What? Mariah Carey's body can control the space around it. We all knew that.

I mean, yes, the muscles are clearly fake. I'm just curious why the entire body is purple.

OK, I'll admit there's nothing wrong with the human body in this photo, but this Photoshop fail was too funny not to include. Once again: Mirrors exist, people!

Well, he's clearly in the car. I don't know why anyone would doubt this.

Would you swipe right?

I don't know whether to be more concerned about her waist or her arm. They are both very worrisome.

I'm assuming this was done by a professional photo editor. Even the pros forget about reflections, apparently.

Hey, maybe she's sitting in front of a wall that just happens to be all wibbly wobbly like that. You never know. (Except for in this case, in which you do definitely know.)

Anyone else seeing this?

Maybe it's photo editing. Maybe her body bends time and space around it. It could be either.

Just another example of the impossible beauty standards set forth for women. Guess I have to go get rid of my nose now.

He's holding hands! Or...he's holding a hand, anyway. Where did he get that thing?

Well, I'm pretty sure the bandana headband is real. That counts for something, right?

What long fingers you have!

To be fair, she is a mutant.

Why strive for a 6-pack when you can have a single rectangular prism of flesh jutting out of your torso? Exactly.

Oh, those are those new tattoos I keep hearing about, right? The ones that can't be contained by human skin? Cool.

Am I the only one that thinks this guy looks as though he's been squished against a pane of glass? Someone confirm this in the comments for me.

I guess this is what Logan's daughter does in her free time.