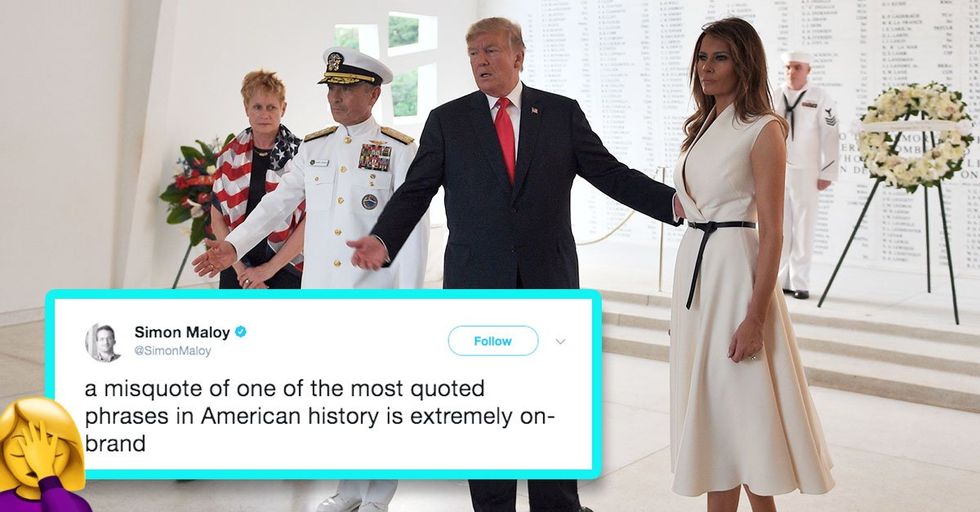 Guys, President Donald Trump is falling apart. We always knew this, but it's becoming clearer and clearer with every second of every day. Yesterday, he made the ill-advised decision to recognize Jerusalem as the official capital of Israel, and in a speech about it slurred his words so badly that people thought he was having a stroke.

He continued his streak of mistakes this morning when he tweeted out perhaps the most famous quote about the attack on Pearl Harbor but got it wrong. Melania joined Donald on the error train with her super wrong Pearl Harbor tweet as well. Maybe they really are meant for each other...

The family that messes up together stays together. Maybe?

Today, on the anniversary of the attack on Pearl Harbor, both Donald and Melania Trump attempted to tweet messages honoring the day. However, it went wrong...for both of them. Just incredible.

It's Pearl Harbor Remembrance Day, and yet, it doesn't seem like Donald or Melania remember the details too well.

On Pearl Harbor Remembrance Day, Trump gets the quote wrong (it was “a date which will live in infamy”) and Melania… https://t.co/xRjmoeH6VY
— Brian Klaas (@Brian Klaas)1512661969.0

In Donald's tweet, he attempted to quote the most famous phrase from Franklin D. Roosevelt's speech following the attack in 1941, and in Melania's, well, she just got the date completely wrong.

Melania wrote the date as 11/7/1941. Of course, the attack on Pearl Harbor did not occur in November on 11/7 but in December, on 12/7, which is also Pearl Harbor Remembrance Day, which is also today. We all forget the date sometimes, but we are not all the first lady with an entire staff around us making sure we don't mess up important things.

It really begs the question, What was she thinking?, a question that Melania herself seems to enjoy asking.

We really don't stop to appreciate this tweet from First Lady Melania Trump enough anymore. So take a moment. Stop. And think about just how glorious this tweet actually is.

Of course, Melania deleted the tweet with the error and reposted a new one with the correct date.

Look, it might have been a typo, a slip of her perfectly manicured fingers. We get it. Everyone makes mistakes. But when you make a mistake, the thing you do is quietly correct it and move on, right? Welllll, that's not what you do if you're Donald Trump, President of the United States...

He started the day with the above tweet recommending a book on Andrew Jackson written by Fox News personality Brian Kilmeade. Of course, we all know that Donald Trump doesn't read books, so this tweet was strange for several reasons.

But then, someone must have whispered in his ear that it's the anniversary of the attack on Pearl Harbor, so Trump tweeted this:

Of course, the problem with this tweet is that "A day that will live in infamy!" is a misquoted passage from Roosevelt's speech. That's not actually what he said. And the craziest part of this? He hasn't deleted and corrected it. As of almost noon, the tweet is still up.

The real quote is, "A date which will live in infamy." What Trump wrote is close but no cigar.

The problem is that the president should be able to get one of the most famous quotes in the world correct. If he's getting things as simple and minor as this wrong, what else is he getting wrong? (Of course, we know the answer to that is everything.)

While many were quick to point out that Donald Trump had made a mistake, no one was actually surprised.

a misquote of one of the most quoted phrases in American history is extremely on-brand https://t.co/AtREhqjW0D
— Simon Maloy (@Simon Maloy)1512660045.0

It's impressive though that both the President and the First Lady managed to mess up their Pearl Harbor tweets.

Seems like they have more in common than we think they do.

Melania probably wouldn't be thrilled to hear that. Anyway, to all, on this Pearl Harbor Remembrance Day, December 7, 2017, let's all hope and wish that Donald Trump doesn't lead us into World War 3. We'd hate for there to be another tragic day our president can't remember the details of.