Boxed Mac and Cheese Minus the Cheese, and 11 More of the Saddest Meals Ever Conceived | 22 Words 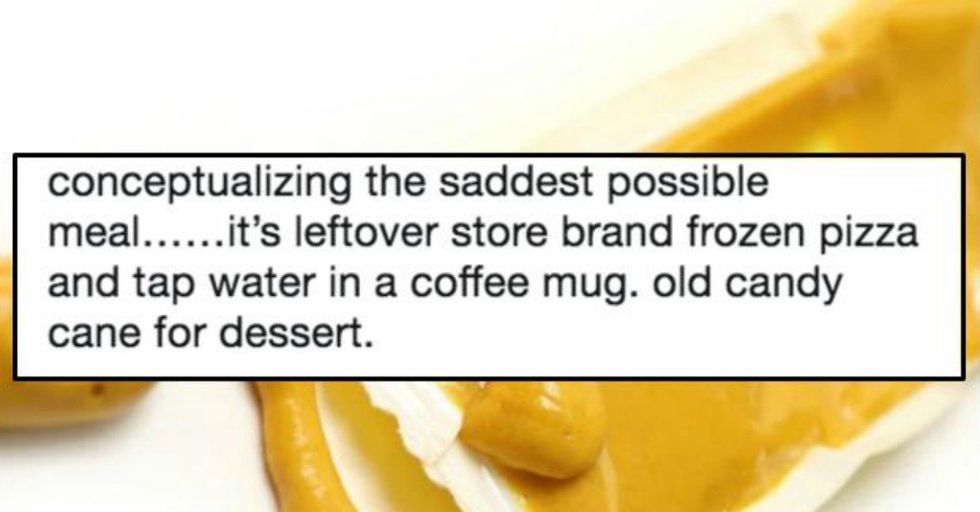 Boxed Mac and Cheese Minus the Cheese, and 11 More of the Saddest Meals Ever Conceived

Have you ever felt the crushing frustration of spending money on a sandwich that turns out to be mediocre? Because you could and do make mediocre sandwiches for yourself all the time? That's a bad meal, for sure. But sad sandwiches are just the beginning.

You may not even realize how truly depressing some meals are until the moment you begin to eat. They're terrible not just because of what they are, but how they're made, and why. Twitter user @bobby started a hilariously melancholy Twitter thread about the saddest meals he could think of, and people were quick to add their own.

People liked his idea but defended the sanctity of pizza.

Some had even eaten this exact meal. The candy cane is really the cherry on top of the sadness sundae. Leftover pizza on its own isn't that bad, right?

He wasn't finished. Pizza may have been too universally loved to be considered sad.

Next up — a Kraft single on a hamburger bun, with yesterday's watered-down Wendy's soda, eaten while watching a re-run of Martin.

The ideas kept getting more advanced.

Mac and cheese without the cheese, and skim milk in a red Solo cup that, at some point, was used to play beer pong. That is grim.

A user @s33k, going by the name of Dr. Alcoholism PhD (*raises eyebrows*), suggested this risky concoction. He definitely, totally, didn't get this idea from personal experience...

"A sandwich I dug out of a trash can in a lecture hall with a warm 4loko that sat open on my desk overnight one time in college." Hmmm. Why an alcoholic energy drink during the day? And for what reason would one get a sandwich from the garbage? We can't be quite sure, but it's probably not a glamorous one. People had more sad meals to contribute, and you'll want to see their hilariously grim responses...

It's hard to mess up a bagel, but, it is possible:

Twitter user @magicdad wrote, "A microwaved bagel, both sides mayo only. Extremely weak iced tea." That meal is not going to be magical.

The user @MrPhetz, who goes by High Level Scare Man, went for the sad sandwich angle in lieu of old pizza.

He wrote, "Pizza is too pleasureful of a meal, I vote for two pieces of white bread with bologna in between." That's a high-level scare right there.

This suggestion may be the strangest — and most real.

@LydiaBurrell said that she was once hiking and ran out of water, so she had to instead use a Coors Light to make her Cup Noodles. Another user, @jeanlucpeakhard replied, "No, but that's cool"! Lydia assured us "it wasn't cool." We believe her.

This one's all about circumstance.

Another Bobby, @EndlessBummr (props to you, Bobby, for that clever and relevant Twitter handle) wrote, "A full Thanksgiving dinner, perfectly executed, extensively garnished. For one, three empty set places at the table."

This one, which is totally, not possibly, inspired by a real-life experience.

@corusan12 wrote, "Meijer [$]5.99 rotisserie whole chicken eaten standing over a sink with your hands in rubber gloves? Because I don't know what that is like." This one and the previous one are both different ways to eat alone, and both are uniquely sad.

It brings a sadness to carrot cake that we hadn't previously considered: "A carrot cake but its[sic] your birthday and no one is there."