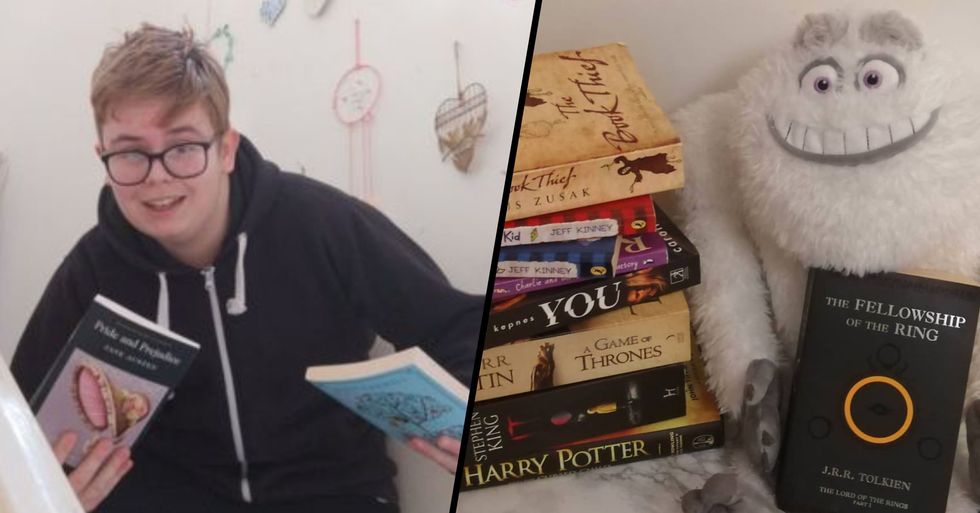 Starting school can be daunting for anyone. For most people, it's a time of stress, insecurities, and social pressure. Trying to fit in with the "cool kids" while simultaneously trying to study for midterms is a pretty difficult task, to say the least.

One bullied boy, who has been teased for his love of reading, has well and truly had the last laugh this week after going viral online. Keep scrolling for an extremely wholesome read...

Knowing that someone has your back makes walking through those school gates just that little bit more do-able. In fact, we'd go as far as to say that having good friends can actually make school kind of okay.

It's a heartbreaking reality...

And it seems that straying away from anything deemed to be the "norm" can land you the victim of relentless teasing and bullying.

The outpouring of online support for this bullied schoolboy - trolled by his schoolmates for liking books - shows t… https://t.co/VOHyqLZSRN
— Rachel Clarke (@Rachel Clarke)1583097122.0

The teen from South Shields, in the U.K. was devastated when he became the target of bullies at his new school for his love of reading.

He set up the page, titled @cals_book_account to share recommendations with his friends as well as document what books he was reading.

The teen features the likes of Jane Austen, George Orwell, and Mary Shelley on his page.

But his happiness was soon shattered when he became the target of relentless bullying at school for his Instagram page.

The bullying reportedly "left him in tears."

Things reached new heights however when a Whatsapp group chat he had joined at his new school was used to make fun of his hobby.

At one point in the group chat, he was labeled a "creep."

"I don't tend to cry that often but I think that was the first time in a while I've actually cried," the teen admitted.

He had also been described as a "sad weirdo."

The comments, that were made on the group chat that Callum had been added to, left him "devasted," according to his mom.

So, his sister decided to take action against the bullies...

Ellis Landreth took to Twitter on Saturday to speak out for her little brother.

Can’t believe how awful kids are. My little brothers made an Instagram reviewing and talking about books and kids i… https://t.co/Y3cfyEzJ73
— Ellis (@Ellis)1582972178.0

And was met with an outpour of love.

@EllisLandreth1 Happy to send Cal three books of his choice. Just DM me the name and address to post 'em to and the… https://t.co/MJVCEAvXUL
— Big Green Bookshop (@Big Green Bookshop)1583050310.0

Callum's mom, Carla Landreth, said he has loved reading since he was really young and tends to pick up books you wouldn't expect a young teen to be interested in.

Even celebrities got on board.

Author, Matt Haig, who has written popular titles such as Notes on a Nervous Planet and Reasons To Stay Alive, chimed in.

Since the outpour of support, Callum has grown in confidence.

@EllisLandreth1 This is horrible to hear - but we're pleased Cal has been proved right! We're following him on Inst… https://t.co/vDxs9PJdqZ
— The Folio Society (@The Folio Society)1583162933.0

"And since this has been happening, his confidence has just soared. He's a lovely kid, he's a very loving kid, and he's just saying, 'I can't believe these people want to follow me on Instagram and want to send me stuff'."

And Callum's followers have began to skyrocket.

At the time of writing, his Instagram page had amassed a staggering 250k.

The teen even took to his Instagram story to thank everyone for their support.

"I never thought this would ever happen, this just happened out of the blue, and it's just showed that there are good people in the world."

This story proves that social media really can be used for good.

His followers are increasing by the hour! He's well and truly has the last laugh... Check out his Instagram page here.