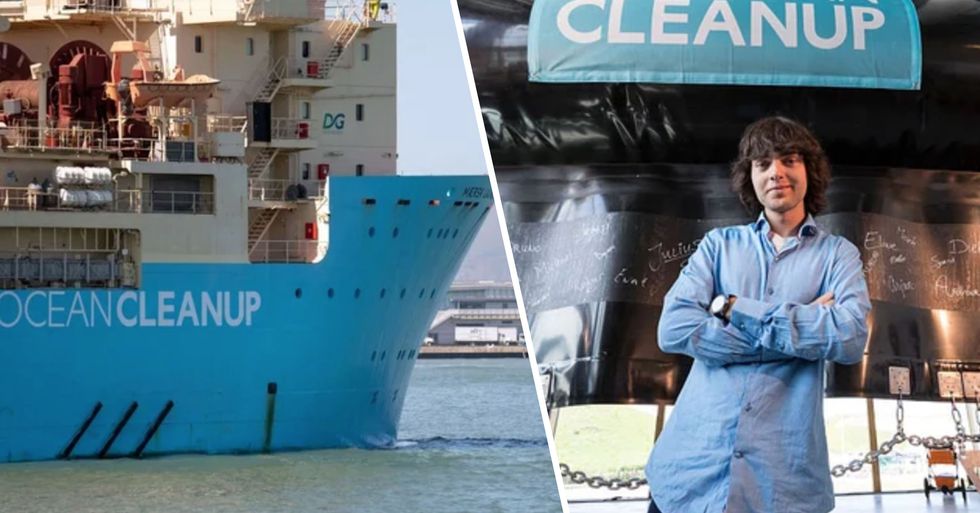 At just twenty-five years old, the CEO and founder of revolutionary plastic waste company, The Ocean Cleanup, has remarkably invented a device that enables our oceans and rivers to rid themselves of plastic pollution.

Now, this solution will be music to most people's ears...

Because, for years, our plastic pollution issue has been spiralling out of control.

Between 4.8 and 12.7 million tonnes of plastic enter our oceans each year, according to figures published in the journal Science, and if we don't act now, our oceans could be destroyed forever.

A tremendous amount of awareness has been raised about the issue in recent years...

Public figures like Greta Thunberg have encouraged millions of people all over the world to reduce their single plastic use.

Admittedly, the climate-change movement is admirable.

But the fact remains the same - Greta Thunberg, who has a 9.9 million-strong following on Instagram, is yet to offer any practical solution to the ongoing battle against plastic pollution.

While skipping school, marching in protests, and shouting at world leaders sends a strong message...

None of it will actually eradicate the millions of tonnes of plastic building up on the floor of our oceans, will it?

Well, while millions of people were listening to Greta...

A slightly less idolised teenager was quietly getting to work to clean up our oceans once and for all.

Boyan Slat was simply a teen with a vision.

After going on a diving trip to Greece when he was sixteen, the Netherlands-born Boyan was shocked and appalled to see that there was more plastic than there was fish in the ocean.

And, instead of attending climate change protests and rallies...

Boyan decided to actually do something about the problem.

In 2013 at the age of eighteen, he dropped out of his Aerospace Engineering degree to launch his own non-profit organization, The Ocean Cleanup.

Boyan's mission was to develop advanced technology that could rid the oceans of the plastic and particularly disassemble and clean the Great Pacific Garbage Patch, a stretch of marine debris between California and Japan.

The Ocean Cleanup had invented and brought to life System 001 - a floating barrier nearly 2,000ft long that sits along the Great Pacific Garbage Patch, the world’s largest accumulation zone of ocean plastics.

And, using 60 different systems, gradually eradicates all the plastic cluttering that part of the ocean.

It is predicted to make some pretty incredible changes...

And experts expect that the system will have cleaned over half of the Great Pacific Garbage Patch by 2025.

And Boyan's latest invention could be his most incredible yet...

The Interceptor is a solar-powered barge that has been created specifically to collect river debris into dumpsters and then bring it onshore for recycling.

Boyan realized that much of the ocean's plastic pollution starts in our rivers...

So he decided to cut the flow at the source.

"To rid the oceans of plastic, we need to not only clean up what is already out there but also stop new plastic from entering the ocean: we need to close the tap."

The Interceptor is The Ocean Cleanup’s answer for river plastic waste.

And works by collecting hoards of plastic debris onto a conveyor belt.

For a more technical explanation...

via: The Ocean Cleanup

"River waste flowing with the current is guided by the barrier towards the opening of the Interceptor. Thanks to the Interceptor’s catamaran design, the water flow path is optimized to pass through the system, carrying the plastic onto the conveyor belt."

One barge alone can collect up to 110 tons of debris...

That would otherwise end up cluttering our ocean's floors.

It is hoped that there will be Inceptor barges in every country by 2025.

But for now, they are already working hard in the Klang River in Kuala Lumpur, Malaysia, and the Cengkareng Drain in Jakarta, Indonesia.

Boyan Slat is paving the way for a cleaner world...

What an incredible young man.