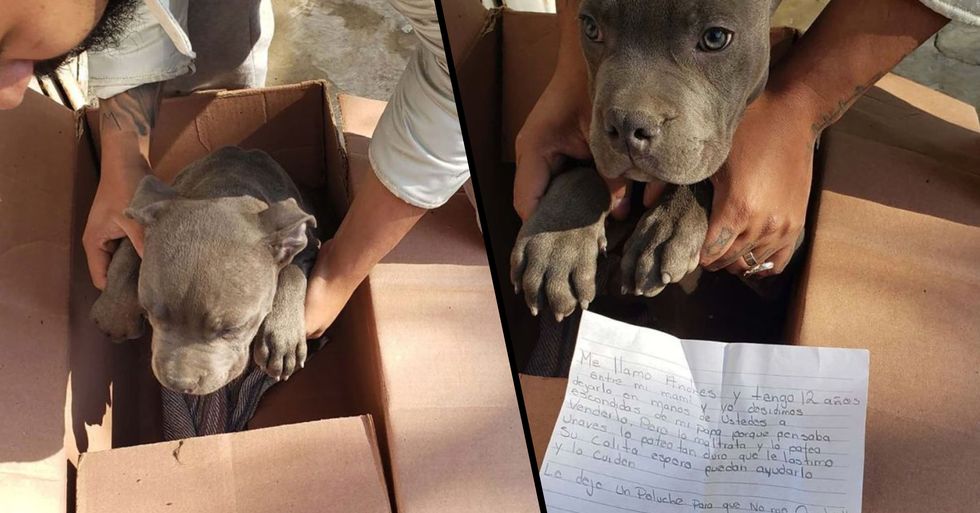 Not only are they super cute and loyal companions, but they are also very intelligent animals who have amazing memories.

However, there are cruel people out there who willingly harm these beautiful animals.

Keep scrolling to learn about the boy who left his helpless puppy at a shelter to keep it out of harm's way...

But despite a dog's gentle nature...

There are people out there who will willingly harm our beloved companions.

The statistics of animal cruelty and abuse are horrifying...

According to Humane Society, there are approximately 70 million pet dogs and 74.1 million pet cats in the U.S where twenty men and women are assaulted per minute (an average of around 10 million a year).

Animal cruelty is no joke...

And many unfortunate pets are left traumatized by being under the care of certain individuals.

On the 13th of February, a shelter in Mexico called Xollin received an unusual package on their doorstep.

There was a puppy in the box...

The shelter’s first priority was to check the health of the puppy. "We need to take the dog to the vet so he can check his tail, which apparently is fractured. We also need to remove parasites and get him a check-up. This means more expenses and work for us, but luckily the dog will be safe," they explained on Facebook.

A letter was enclosed in the parcel with the unnamed dog...

The letter reads translated from Spanish, "My name is Andrés and I’m 12 years old. My mom and I decided to leave him to you. All of this is behind my dad’s back, because he was thinking of selling him. But he is always beating and kicking the dog. Once he kicked him so hard that his little tail got injured. I hope you can help him and take care of him. Here is a plush toy so he won’t forget me."

And the fact that the young boy gave up his best friend to protect him is harrowing.

The shelter renamed the dog...

And he is now called Rene.

He is now up for adoption...

And more than 300 messages have already been sent in about adopting the little pup.

These floods of messages only came in after the post went viral...

And the shelter voiced how they wished more people in general would look into adopting and rescuing animals, rather than buying.

There are too many abused animals out there who need a loving home...

"If you all opened your heart and your home to all and not only to this dog, all our animals in the shelter would have been already adopted twice. Thanks to the few people who came to the shelter offering their help to protect other animals suffering abuse or being abandoned in our district and surroundings," they said.

It is so important to adopt rather than shop...

Because no matter the cost, all dogs have just as much love to give. Keep scrolling to learn about the "unicorn puppy" who recently got adopted...