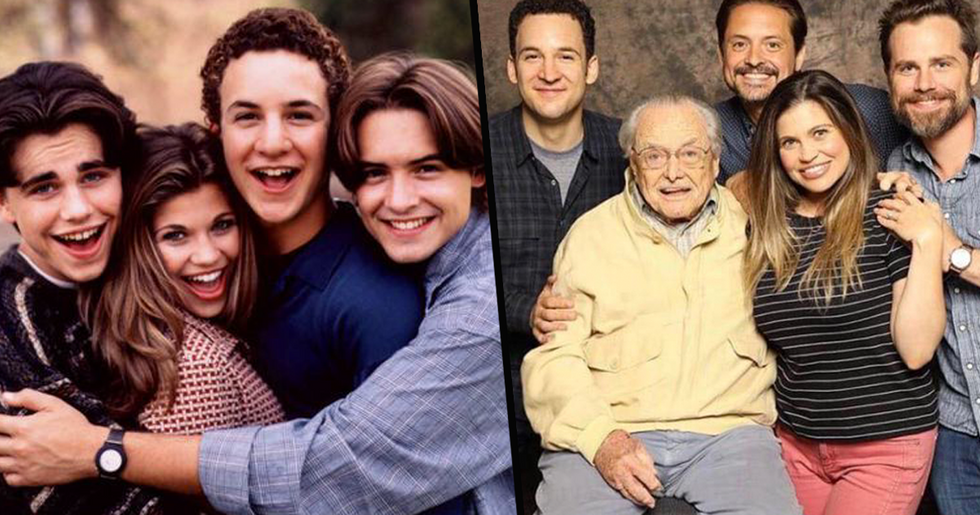 Even with the awareness of black stereotypes in the media, the TV industry is still a million miles away from tackling these issues.

This is what made actress Trina McGee, who famously played Angela Moore in the hit sit-com, Boy Meets World, speak up about her own struggles.

Keep scrolling for the resurfaced tweets, and her castmates' response...

If you didn't know this famous sitcom, where were you for the last 30 years?

That's right, Boy Meets World has been a part of people's lives since it first aired in 1993!

While the premise of the show revolves around Cory Matthews, it's the relationship between his best friend Shawn Hunter, and Angela Moore that stole fan's hearts.

The show is known for touching on serious topics, such as alcoholism, abuse, teenage pregnancy, and racism.

The latter has caused quite a stir recently...

After the actress, Trina McGee, who played Angela Moore, revealed what was really going on behind the scenes. You'll never guess what her shocking tweets reveal.

It's disgusting that racism is still so prominent in this day and age.

You'd have thought that perhaps by the twenty-first century, people wouldn't be getting so uptight about skin color.

One US survey reported that 15.8% of students experience race-based bullying or harassment.

Students shouldn't have to worry about being bullied or harassed due to their skin color.

On top of everything else they have to worry about at that age. Research has found significant associations between racial bullying and negative mental and physical health in students.

And it's not just a problem in the playground...

The federal government body that polices racial discrimination at work, uses "Go back to where you came from" as li… https://t.co/YjgTd8UZdS
— Chris Hayes (@Chris Hayes)1563311338.0

COVID-19 is amplifying so many inequities in our society. We have to ensure support gets to those who need it immed… https://t.co/slYvBe8qXd
— Joe Biden (@Joe Biden)1586971200.0

In the US, black workers are less likely than white workers to be employed in a job that is consistent with their level of education.

Racism is found even in the most unlikely places.

The TV industry isn't the inclusive, all-embracing production they'd like you to believe.

There have been significant strides towards equality in American society.

But it seems this ideation hasn't fully weaved its way through American society as a whole.

Even blatant stereotypes can be seen in TV and film that make you question if anything is really changing.

@loveandhiphop "Do you think black people can be allergic to chicken?" The stereotype that ONLY Black People like… https://t.co/zrdj0Ui8jg
— TheMissJLM (@TheMissJLM)1586943286.0

The problem lies with minorities either being over-represented by liberal ideologies, or underrepresented entirely.

The TV industry has been called out many times.

To this day, black men are often portrayed as scary or angry and black women as loudmouthed and sassy. If a movie features one token black character, it's likely to be the black best friend. And, if people die in a movie, the black character is still likely to go first.

However, one TV you wouldn't expect this from is Boy Meets World.

Everyone knows the sitcom Boy Meets World. The show chronicles the everyday events of Cory Matthews (Ben Savage), as he learns to navigate life alongside his friends, family, and trusted teacher, Mr. Feeny.

Sadly it's come to the spotlight that the actors didn't seem to learn from their characters in the show when it came to racism.

A few months ago, actress Trina McGee went public with allegations of racism, verbal abuse, and downright ugliness during her 3 years on set.

She joined the show in Season 5, as a love interest for Rider Strong's, Shawn Hunter.

While the show radiated family and love with the cameras rolling, it wasn't all as it seemed.

She alleges she was called "Aunt Jemima" on set, a "bitter bitch" and, "told 'it was nice of you to join us' like a stranger after 60 episodes."

After fans repeatedly asked her to name names, Trina admitted that the culprits were "the ones included on the poster." With the most iconic poster featuring; Ben Savage, Fishel, Strong, and Will Friedle.

However, she did emphasize that she had nothing but positive experiences with the crew on the set.

Said happy hellos to be greeted with blank cold stares. Dissed for believing in God in front of extras. Fuckery was… https://t.co/QT6qRv51E7
— Trina McGee (@Trina McGee)1578828174.0

She tweeted: "At times the tension of the disrespect was extremely stressful. 25 yrs old at the time raising a family and did not deserve to be thinking about this. None of those three colleagues had children. Just cowardly egos and hot diarrhea mouths."

Fans quickly latched onto the names she hinted at.

Branding Ben Savage, Danielle Fishel, and Will Friedle as the likely culprits of her allegations, even though Trina never specified.

All though it was pretty clear who was involved.

When AceShowBiz covered the story, they showed a tweet from Trina that reads: "They should be a light and own up to it. Sad and sick behavior." In it, she tagged Danielle Fishel, Savage, and Friedle as well.

Several times she made comments to the fact that she would like the 3 unspecified actors to come forward.

@NiebieskiWilk87 @StandUp2All I will when the time is right. Most certainly. Let them squirm knowing I am telling t… https://t.co/DoIAyGP5pd
— Trina McGee (@Trina McGee)1578939946.0

But alas, they haven't. The TV industry should be held accountable for letting acts of any form of abuse happen in their vicinity. There's still a long way to go. Keep scrolling to learn about the racist sign that recently appeared in a Chinese McDonald's. The message is outrageous...