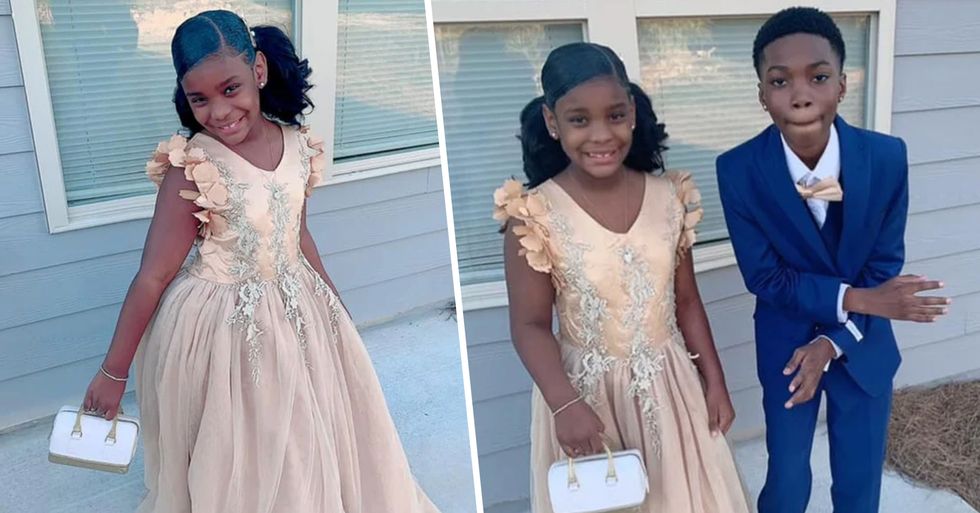 An eleven-year-old boy has gone viral after he took his little sister to her school's annual father-daughter dance after her own dad failed to turn up.

Keep scrolling for the full story, and to see the beautiful photos of the siblings at their dance...

This is the heartwarming story of a young boy's love for his sister.

Trelysia Hamerter, from Covington, Georgia, is a single mom to 2 children, eleven-year-old Christian, and 7-year-old Skylar.

And it was for the most beautiful reason.

Skylar had been looking forward to her school's annual Father-Daughter dance for months.

But last year, her dad hadn't shown up to take her, so she was really rooting on him to deliver this year.

Skylar desperately wanted her dad to be there for her.

Speaking to Today, Trelysia explained just how much it meant to her daughter. "This year she comes to me ahead of time and says, 'Mommy, I want my dad to come with me to the dance. I don’t want grandpa. I want my dad, I want everyone to know I have a dad.'"

Initially, Trelysia was confident that Skylar's dad wouldn't let her down again...

But, in the weeks and days leading up to the dance, she started to get worried.

He was gradually becoming more and more distant...

And eventually stopped answering her calls and texts.

So, a couple of days before the dance, Trelysia broke the news to Skylar and told her that the likelihood of her dad taking her to the dance was slim, thus crushing her hopes and completely devastating the child.

And, after spotting her crying, her older brother decided to do something about it.

Christian spoke to his mom about the situation...

And revealed that he wanted to be the one to take his sister to the dance.

His little sister was heartbroken, and he desperately wanted to do something to help.

She recalled him saying: “If he doesn’t show, mom, I’d like to take Skylar to the dance... she deserves to know that a man can keep his word and that she’s really special."

So, in preparation for the dance...

Treylsia picked out a suit and tie for Christian to match Skylar's gold dress, “just in case" Skylar’s dad didn’t turn up.

The day of the dance arrived...

And, as expected, there was no sign of Skylar's dad.

But, luckily, Christian was ready.

Donning his brand new suit, Christian was ready to step into his father's place

Where she wrote: "This is the 2nd year that my daughter’s father stood her up for the Daddy/ daughter dance. She cried because she had her heart set on going. I felt so bad because there was nothing I could do because I’m not a male(obviously)."

Trelysia is one proud mom.

She continued: "Then her big brother stepped in and said he’d take her because he wanted his sister to know that she deserves a man keeping his word and making her feel special..... y’all I literally cried..."

Skyler finally had her knight in shining armor...

Her dad clearly wasn't ready to be a man, but Christian most certainly was.

The photo is simply precious.

They make the most beautiful dance partners.

Her heartwarming story was quick to go viral, with the original post having being shared over 52,000 times.

People were quick to comment on the maturity and integrity of Christian...

And many praised Trelysia for raising such an amazing child. "You are definitely raising a good man. It's all you. I would be honored to call him son in law. Great job mom. Awesome kids."

But not all brothers are as wholesome as this one. Keep scrolling to read about the older brother who wouldn't let his sister take anyone but him to her prom...