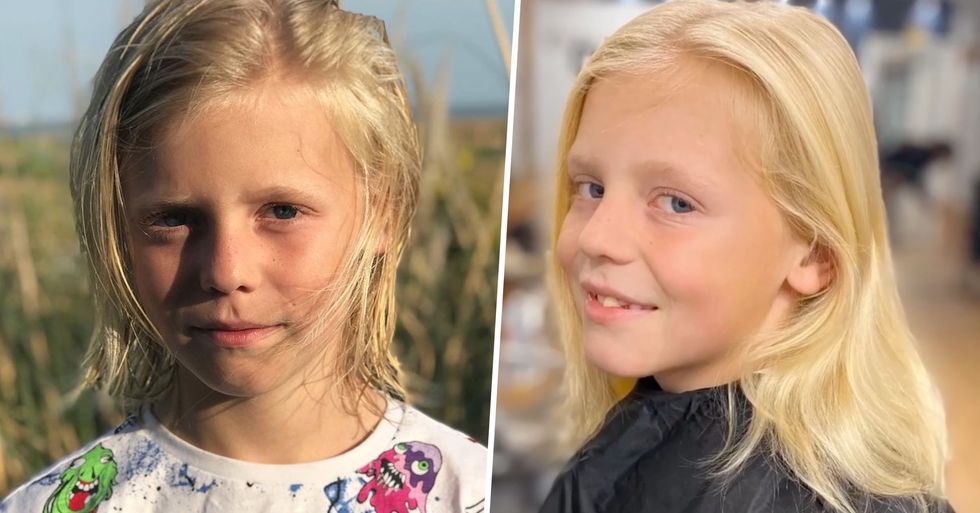 Ladies and gentlemen, I present to you the most heartwarming story you will ever read.

Kit Porritt has spent the last 2 years growing out his hair...

But for reasons you may not have originally anticipated.

Now, Kitt endured years of bullying and teasing as a result of his long hair.

The ten-year-old, from Suffolk in the United Kingdom, was originally inspired to grow out his blonde locks after seeing the Nirvana frontman, Kurt Cobain.

Of course, the other children weren't used to seeing a boy with such long hair...

But this didn't faze the youngster. “I wasn’t really bothered by the jokes," Kit said in an interview. “Lots of people thought I looked like a girl, but maybe they just haven’t ever seen a picture of Kurt Cobain before."

Kit heard the story of a cancer-stricken little girl undergoing chemotherapy, which was making her hair fall out.

Understandably, Kit was moved by the story...

And it made him "feel sad", so he decided to continue growing his hair.

Without telling anyone about his plans...

Kit started growing out his hair in the hopes that it could one day be used as a wig for a cancer patient.

"My mom told me if I carried on growing my hair, I could donate it to be made into a wig, and that sounded like a really cool thing to do."

And it wasn't until a whole year and a half had passed...

That Kit eventually told his mom, Ellen Widdup, about his true intentions with his long locks.

Of course, Ellen was incredibly moved by her son's thoughtfulness.

"He is brave and bold and stubborn and determined. But he is also exceptionally empathetic and sensitive so this kind of endeavor is right up his street."

She also noted how resilient Kit had been throughout his entire hair-growing process...

And even how he had been asked to be a model for girls' clothes! "Kit has never been the kind of child who conforms," Ellen explained. "We lost track of how often he was mistaken for a girl - we even gave up correcting people - but when he was asked to do some modeling for a girls’ clothing brand he thought that was utterly hysterical."

By this point, his hair had grown to be over ten inches long...

So it was time for the chop!

Ellen documented the big moment on her Instagram page...

Where she wrote: "I’m unbelievably proud of this kid. For two years he has been growing his hair. On a regular basis, he has been mistaken for a girl, been called names or teased for a ponytail. Every time he has shrugged it off."

"Because he was growing it for a purpose. And today - after his hair reaches the requisite 10cm - he had it all chopped off... His hair will now be used to make a wig for a child who may have lost his/her hair to chemotherapy. I love this kid and his enormous heart."

And the youngster, who was in remarkably high spirits, could be seen giggling and laughing away as the hairdresser got to work.

Slowly but surely, his hair was cut off...

All in the name of a good cause, however!

As Kit's locks fell to the floor...

His appearance began to drastically change.

And the finished result was remarkable.

And as for Ellen's thoughts on her child's drastic transformation?

Well, she's just relieved that she doesn't have to brush the tangles out every day. "I am very proud of him - and I’m very relieved that I do not have to try and get a brush through it every morning."

Ellen's post has since gained over 1,000 likes, and her followers all commented to congratulate Kit's achievement. One user wrote: "You have every right to be proud of him. You did a great job by raising such a good-hearted young man." While another noted: "How beautiful of a feeling it must be, to have raised a child with such love for others."

For more heartwarming stories on the selflessness of children, keep scrolling to read about the young girl who donated all of her pocket money to a cancer fund...