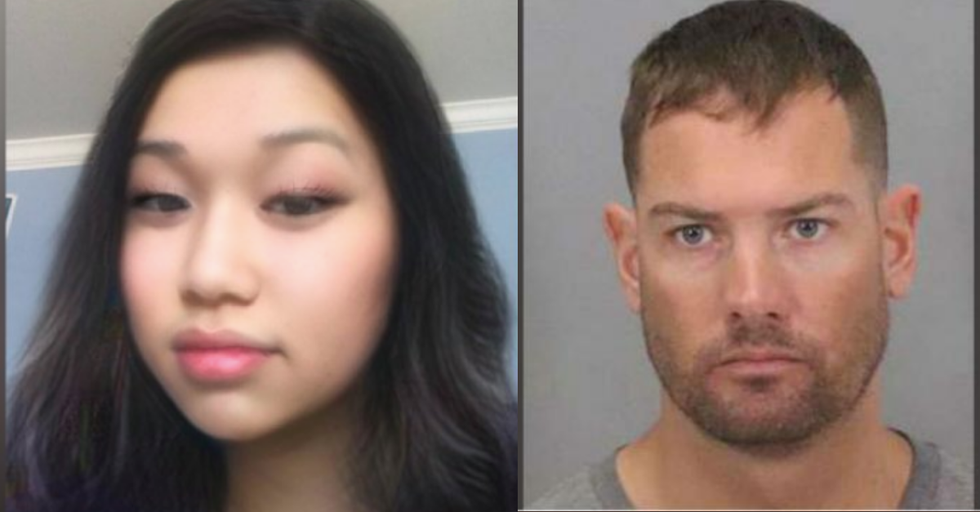 Most of the time when a story breaks about someone getting catfished, we hear the same old story. Creepy old man poses as a young woman to do something horrible or just downright gross to an unsuspecting stranger. But sometimes, catfishing can be used for good. See Chris Hansen on To Catch a Predator.

And that's exactly what happened in Northern California this weekend. A student in the Bay Area somehow managed to successfully catfish a police officer. And it wasn't just a prank -- the police officer was looking to hook up with underage girls. The student, 20-year-old Ethan, is being touted as a tech savant, though any basic knowledge of how to use a phone was good enough to bait this police officer into saying some deeply disturbing things.

Keep scrolling to read some of their hilarious conversations, and see the gender-swapped photo in action. We'll also tell you about the laughable punishment the officer received.

It all started when a friend of Ethan's mentioned he should use the feature to catch sexual predators on Tinder.

Seems like a good idea, if not a little hard to implement.

She had previously been sexually assaulted as a child and thought Snapchat's new gender-swap feature could be used for good.

Who knew Snapchat could ever be used for good? Certainly not me... or my parents.

The new filter has been wildly popular.

Snapchat doubled their instal rates in the weeks following the filters releases.

So if you're wondering "who's still using Snapchat," it's just people swapping their genders for their friends.

And some people have found that problematic.

In fact, Snapchat has come under a lot of scrutiny from trans-advocate groups.

But other users have reported the app has allowed them to see themselves in a new light. Others argue that it further establishes a heteronormative idea of beauty.

But regardless of how you feel about this particular feature, it has proven useful in one capacity.

Ethan, who didn't provide his last name to the media for fear of "retaliation", started a new Tinder profile under the alias "Esther".

After swiping right on some douchey-looking dudes, one finally took the bait.

"Are you down to have some fun tonight?"

What an opening line...

Ethan then asked the officer if they could switch their conversation to Snapchat.

Time to kill two birds with one stone, so to speak.

Because Snapchat is oh so secure, and everything gets deleted, right?!

At first, Davies seemed to balk at Esther's supposed age.

Davies: Wait you're only 16 Esther: Is that a problem Davies: Yeah that might be an issue Esther: Oh yeah you're a cop. Lmao this is awk

Davies: Not really Esther: Oh so you're still down Davies: ?‍♂️

He quickly got over his hesitation though, saying...

Davies: You won't even send any pics of you Esther: Well I guess you'll have to wait and see. Don't want any pics of me going around the internet. Davies: I wouldn't show anybody.

And then it got really gross.

Esther: Or you could wait and see for yourself. Davies: ?

I hate humanity sometimes. We can be so disgusting to each other. Because it just keeps getting worse.

After talk about sending sexually explicit photos was exhausted, the officer turned his focus to sex.

Because of course it did. He's already gone this far, what's a little more?

After the conversation turned to sex, Ethan got the authorities involved.

Thank God. This story has a happy ending(ish), but so many like it do not. I'm just thankful that Ethan knew what he was doing and got the police involved before things could get any worse.

He didn't want to tip off Davies by screenshotting the texts though.

Because in Snapchat, you get a notification every time someone screenshots your photo or message.

So Ethan did something pretty clever.

Something that I will definitely be using going forward.

He took his screenshots while his phone was on airplane mode.

That way his app had no way of altering the Snapchat server that a screenshot had been taken.

I will now be using it every time I want to hide read-receipts on Facebook Messenger.

So I know you're asking yourself, what was the photo that kicked this all off in the first place?

Because the new Snapchat filters pull off this desired effect with incredible results.

Here's the picture Ethan first used on his Tinder profile.

That's... not too shabby. Sure, it looks like someone used a filter, but honestly who doesn't do a little retouching every now and then anyway?

Worst of all, Officer Davies had recently been recognized by the San Mateo Police Department for his "excellent leadership" skills.

"This alleged conduct, if true, is in no way a reflection of all that we stand for as a Department, and is an affront to the tenets of our department and our profession as a whole. As San Mateo police officers, we have sworn an oath to serve and protect our communities. I can assure you that we remain steadfast to this commitment to serving our community with “Professionalism, Integrity, and Excellence."

Not the most convincing statement, but sure, I'll take it.

Officer Davies received a pretty cushy punishment while the dust settles on this case, however.

Davies has been arrested, however...

He has been put on paid administrative leave while he faces a charge of contacting a minor to commit a felony. You've got to be kidding me. Paid leave?!

We need to stop paying our Police Officers while they go on vacation after committing a crime.

Yes, Davies was arrested, but he will no doubt post bail, and get to enjoy a lengthy paid vacation while he waits for his trial.

Let's just hope that if he does prove to be guilty, he doesn't get away with it as so many other Police Officers do.

But I'm not the only person with an opinion on this...

Should Davies get locked up, or does he deserve a second chance because he didn't actually go through with any crime?