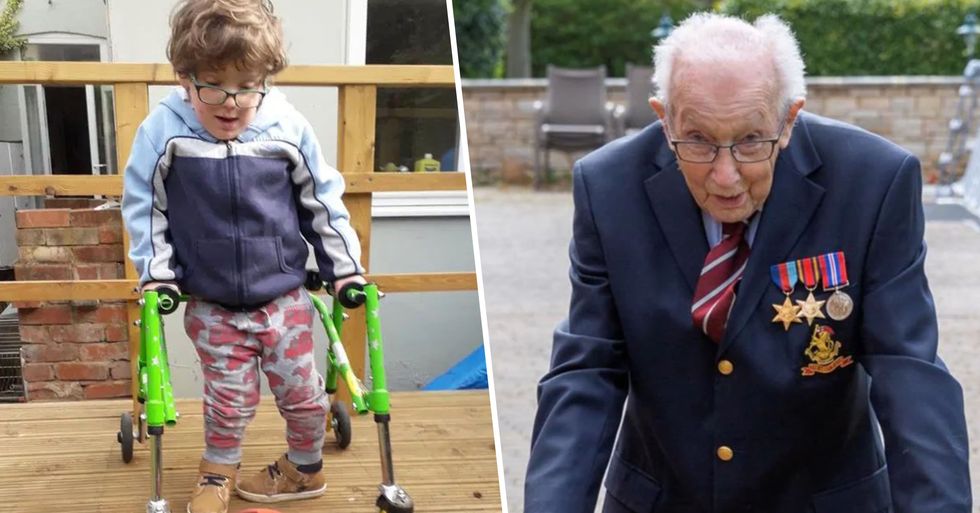 A 6-year-old boy with Spina Bifida has been well and truly inspired by the tireless work of Captain Tom Moore, so he has decided to raise his own money by walking 10 meters a day with his walking frame...

Healthcare services are strained as it is...

Despite already risking his life to serve his country, the ninety-nine-year-old still has plenty more to give.

Moore - with help from the more tech-savvy members of his family - set up a fundraiser for all the doctors and nurses risking their lives during this crisis earlier this month.

His goal was to walk one-hundred laps of his garden before he turns one-hundred at the end of this month.

But his target was soon surpassed.

The donations have been building by the day...

And at the time of writing this article, Captain Tom's Just Giving page now stands at an incredible $27,997,189. FYI, that's the equivalent of $37 million... just let that sink in.

And he has inspired so many people... including one certain little boy.

Coming from Bristol in the U.K, the little boy suffers from Spina Bifida - a condition where a baby’s spine does not develop properly in the womb.

He only started walking with his frame eighteen months ago...

And after seeing Captain Tom's amazing achievement, Frank decided that he wanted to do the same for his NHS.

He initially wanted to raise £99 to match Captain Tom’s age...

And last week, he started walking his laps. Frank's mom, Janet, said to BBC Radio Bristol, "Frank just said: 'I want to do that!'. So we grabbed hold of that magic moment of motivation and we took his walker outside for him. We chalked out ten meters on the pavement with a start and finish line and 2-meter 'you can do it!' markers."

"Frank’s enthusiasm was not just surprising but invigorating and as he shouted at one of our neighbors to sponsor him, we thought why not? Maybe we could get some friends and family to support Frank," Janet said. "We quickly put something up on JustGiving and shared the link on Facebook, and from that moment it took off! We cannot believe how people are responding."

Which is approximately $183,531! His parents have named it "Frank's Finish Line Fundraiser," and of course, they are unbelievably proud of their son.

This is the least that the U.K's NHS deserves...

Janet and dad Tony say they are extremely grateful for the work of the NHS with their son – hailing their "amazing care and dedication."

The money raised will be donated to NHS charities.

A job well done, Frank! Make sure to keep scrolling to read about the delivery guy who specially sanitizes parcels for a girl with an autoimmune disorder...