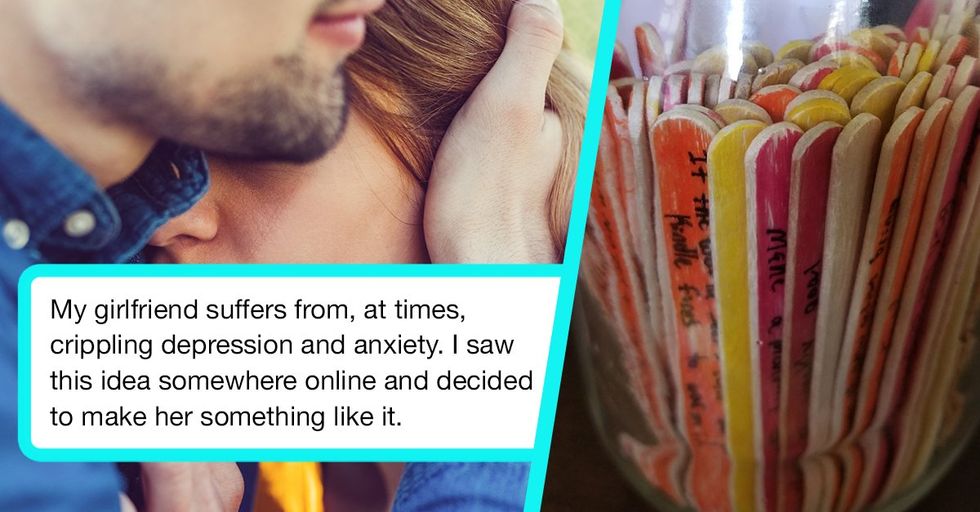 If you think about it, popsicle sticks are one of the most useful objects in existence. First and foremost, they often hold popsicles, and what's better than that? But you can also use them to build neat sculptures and other craft projects. Those tongue depressors doctors sometimes use? Basically giant popsicle sticks. Like I said, they're super handy.

But Reddit user bovadeez may have found the best use for popsicle sticks yet. He used them in a very clever way to help his girlfriend cope with the depression and anxiety that plague her life.

Like millions of people around the world, Redditor bovadeez's girlfriend suffers from depression.

As anyone who has dealt with depression knows, there isn't an easy solution or cure you can count on to provide relief when the illness takes over. That can be hard for loved ones to see, and it's totally natural to want to reach out and help. That's exactly what Redditor bovadeez did. He said, "My girlfriend suffers from, at times, crippling depression and anxiety. I saw this idea somewhere online and decided to make her something like it."

It all started with some popsicle sticks.

I know what you're thinking. How could popsicle sticks possibly help in a situation like this? Stick with me, here.

He then colored some of the popsicle sticks using markers. The sticks were now four different colors: orange, pink, yellow, and plain.
So far, this thoughtful craft project had taken maybe $5 and no more than a few minutes of time. He then wrote some messages for his girlfriend on the popsicle sticks (more on that in a sec).

The popsicle sticks are color-coded with special messages for his girlfriend. The orange sticks are for "inspirational quotes from poets, political figures, philosophers, and humanitarians across time." The pink sticks offer suggestions of small things she can do to help her relax, like "Take a short break."
The yellow sticks offer reminders of things he wants his girlfriend to remember, like that she's worth it and that it's OK to ask for help when she needs it. And finally, the blank ones are for his girlfriend to fill out herself. When she pulls out a blank stick, she can record a memory of her happiest moments and place it back in the jar to pull out and read when she next needs it.

Seriously, major kudos to this guy.

The way he stepped up to do something tangible to help the woman he loves is worthy of some major applause. "Living with someone that completely shuts down from both of these problems I'm trying to see if it'll help," he said. "She sometimes gets so caught in what she's doing she becomes overwhelmed and doesn't even realize it. I'm hoping that this will help her — even a little is a lot."
After he posted pictures of the popsicle sticks to Reddit, people were quick to point out how awesome it is that he's stepping up to help his girlfriend during a time in which she may feel very alone in the world. "This is such a great idea. Just the fact that you have her back is incredible! There's so many that just can't manage to do that," Redditor chgogrl said. "As a person who has suffered from anxiety and depression for most of my life you are awesome for doing this," Redditor prayforplagues82 said. "She may not take advantage of it all the time or you may think it's not helping but trust me, it does."

Sometimes, the thing that helps the most is simply letting your loved ones who are hurting know that you're with them.

You can't solve all of their problems, but you can walk with them and show them that you have their back. Even something as simple as a nice message written on a popsicle stick could help.