Boyfriend of the Reporter Who Was Shot to Death on Air Just Won a Seat in Virginia House of Representatives, Against NRA-Backed Opponent | 22 Words 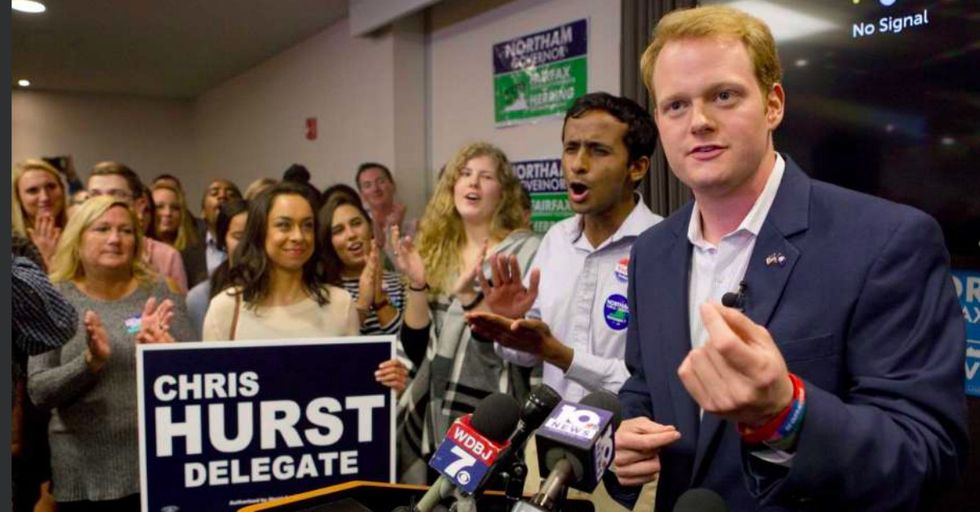 Boyfriend of the Reporter Who Was Shot to Death on Air Just Won a Seat in Virginia House of Representatives, Against NRA-Backed Opponent

In August 2015, 24-year-old journalist Alison Parker was doing a routine morning news segment when she and her cameraman were gunned down on live TV by a former colleague, who later shot himself. That tragedy was a turning point for Chris Hurst, Parker's colleague and boyfriend of nine months. Within a year, he had resigned from his job and announced his intention to run for state office against a Republican opponent endorsed by the NRA.

Hurst did not run on a stringent anti-gun platform, however.

"I have no intention of trying to ban or prohibit any type of class of weapon," Hurst said in a radio interview. "I would never want to legislate someone's culture or their way of life. But I do think that there is work that we could do through a gun violence protective order to reasonably — for a set amount of time — remove a gun from a dangerous situation. Nobody just snaps. There's always something that is occurring — a pattern."

The Guardian reports that Hurst is "skeptical of some of the culture war policies that Clinton and other gun control advocates have embraced, such as bans on popular military-style 'assault weapons.'"

Instead, he wants to ensure that guns remain out of the hands of people at the critical times they're most prone to violence. Ensuring domestic abusers aren't able to get guns after an emergency protection order has been granted for their victims, for instance, or creating a “gun violence restraining order" law, which would allow family and friends to take guns temporarily away from people they think are headed towards violence.

Hurst is adamant that he does not want to take guns away from people - only to introduce commonsense gun control.

"We have a lot of work to do to cut out the BS when it comes to gun violence prevention," Hurst said in an interview with the Guardian.“What I care about most is trying to reduce the number of people who die with a gun, whether it’s homicide or suicide. The last thing I would want to do is to try to change someone’s culture or their way of life."

Hurst also ran on other policies such as health and childcare.

“Anyone who wants to call me a single-issue candidate can look at my body of work over several years. I didn’t report on a single issue, I reported on dozens of different issues," he said.

On Tuesday, Hurst beat Joseph Yost, the three-term incumbent for a seat in the 12th District of Virginia's House of Delegates.

Hurst won by 54 percent, and his name recognition and the support of college students at Virginia Tech and Radford University propelled him to victory. Hurst says he and Parker discussed politics when they watched the Netflix show House of Cards. “‘Wouldn’t it be cool if I could be a senator’s wife?’" Parker asked. "I told her I would much rather be a senator’s husband. She would have been awesome at it." "I would not be who I am right now if the person I love was not killed with a gun," Hurst states.