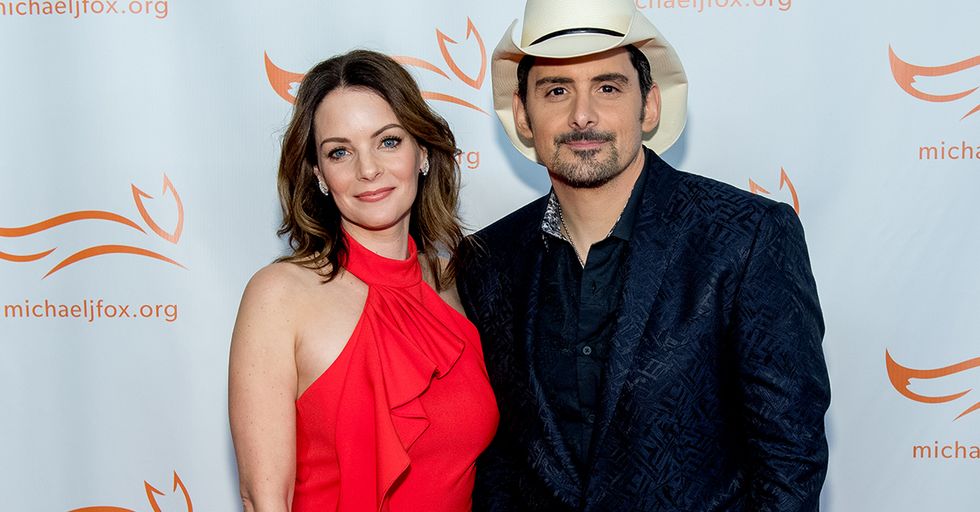 Brad Paisley has officially broken ground on his free grocery store! The country music singer is doing his part for the community with this new project.

Paisley's won't be the first "free" grocery store, inspired as it was by another such shop in California. Paisley found himself inspired after a visit and is now bringing that vision to Nashville, Tennessee.  And Paisley isn't working alone on this--his alma mater is in on the project too. So check out the work that goes into making this idea a reality for both Paisley and everybody involved. A place like this can do a world of good for the Nashville community once complete!

In October 2018, the Paisleys announced a special project.

They got the idea from a trip to California.

While there, Paisley and his family stopped at the Unity Shoppe, a nonprofit free store that operates much the same.

They wanted their sons to learn something from the Unity Shoppe.

“We took our boys to Unity Shoppe to teach them about serving others and giving back to people in need," said Paisley while announcing his own free grocery project.

So the boys (and their parents) did some Thanksgiving community service.

“We were looking for a place to teach the children about how spoiled they are," Paisley told PEOPLE. “Kim had decided they needed to know there were hungry people in the world. They went in and they immediately started packing rice in bags and checking people out at the counter and working with the staff there."

The family made an unexpected discovery in the process.

“And we came away surprised by what the organization had taught us," Paisley added. "Most people don’t want handouts. They want dignity and respect. Most people want to become self-sufficient."

So that's the idea of the Unity Shoppe, and now Paisley's upcoming store.

“We loved seeing parents making choices for their own families," Kimberly Williams-Paisley said, “rather than receiving a bag of food they might not necessarily want or need. We got very excited about bringing the concept of a free grocery store back home to our Nashville community."

The new grocery is simply going to be called "The Store."

"We want The Store to be a cheerful, safe place for volunteers as well as for people who are struggling. We want those who are referred to our program to show up and feel dignity," Paisley said.

And it's been a fulfilling project for Brad and Kimberly to do together.

“It’s great doing something where we can both lead and work toward a cause we care about," Paisley told PEOPLE. “This is not a trivial thing; it’s something that’s very important to us and the community."

Here's how it's going to work:

The Store will essentially operate as a free-referral based grocery store, so that people of fewer means can get nutritious foods they actually need and be given a sense of self-sufficiency.

The Store will be next to Belmont's Ministry Center.

This makes for a pretty convenient location at 2005 12th Ave. South, near several connecting bus routes.

In fact, Belmont has been expanding its community aid projects recently.

The University is planning to head up Healthcare and Legal Aid Ministry Clinics this year. And since both the University and the Paisleys have stated their eagerness to give back, hopefully the partnership will continue from here!

“At Belmont, we believe that the greatest privilege that anyone can ever have is to be in a position to help and serve another person," said Belmont University President Dr. Bob Fisher. "Brad and Kim are living out that mission in an extraordinary fashion in every aspect of their lives, particularly through the creation of The Store."

Belmont's students will also be contributing to The Store.

"We are proud to partner with them on this initiative, and I’m excited to watch as our current students pour their gifts and abilities into supporting the needs of The Store’s patrons," Fisher continued.

Paisley himself is also eager to get Belmont students working in The Store.

“We’re going to have a staff of students who were like me at one time, trying to get ahead in some sort of business field or in life," Paisley said. “I needed to know that this is an important aspect of life. And they’re going to learn that."

And Belmont isn't The Store's only partner.

The Second Harvest Food Bank of Middle Tennessee, along with others, will be supplying The Store with both perishable and nonperishable goods for its customers.

Furthermore, The Store has plans to ensure it gives away nutritious choices.

Everything stocked at The Store will meet the dietary guidelines set by dietitians from the Second Harvest Food Bank of Middle Tennessee!

And the Paisleys plan to eventually expand The Store by providing job training, as well as cooking and nutrition classes there.

According to Belmont University, the initial goal is to serve 3,000 people per year!

The ultimate goal is self-sufficiency.

“One of the beautiful things about this charity is that it helps people rise. It’s very redemptive in the sense because it’s not a permanent situation," Paisley told PEOPLE. “You don’t just get to go there and get that food indefinitely. There’s a limit you’re supposed to work towards being self-sufficient."

ESA is the largest architectural firm in Nashville, and it donated its services to design The Store!

The area is definitely in need of such a store.

That's because an estimated 1 in 7 adults and 1 in 5 children live with "food insecurity."

That basically means they don't always know where their next meal will come from due to lack of financial means. Millions in America suffer from this issue.

Now, ground has officially been broken on The Store's construction.

Last Wednesday during the first week of April, construction of The Store began in earnest. Paisley himself joined in, wielding a backhoe!

Both Brad and Kimberly had words for the groundbreaking ceremony.

Paisley is hoping to not only aid but educate with The Store. “I think it’s gonna be really interesting to see what this looks like when we’re done, not just in building form, but in how it works," he said.

Meanwhile, Williams-Paisley spoke more on her wishes for The Store.

“We love this idea of a free grocery store where people can come in and make choices for their families, and kids can see their parents in a position of power," she said.

In a way, this is also a form of damage control.

“We really want to get people before it’s a major crisis, we want to help people in this gap where they’re trying to get back on their feet and they just need a little bit of extra help," Williams-Paisley explained.

Dang, Paisley even got behind the wheel of a big ol' construction vehicle! That actually looks kinda fun.

So The Store is currently being built.

And you can check out its website if you want to stay up to date with it! Check it out here.

There's a tentative date put on The Store's grand opening.

Paisley currently hopes to have The Store up and running by 2019. With any luck (and support from sponsors and the community), it'll happen! What do you think of this charity effort? Share this story with your friends!