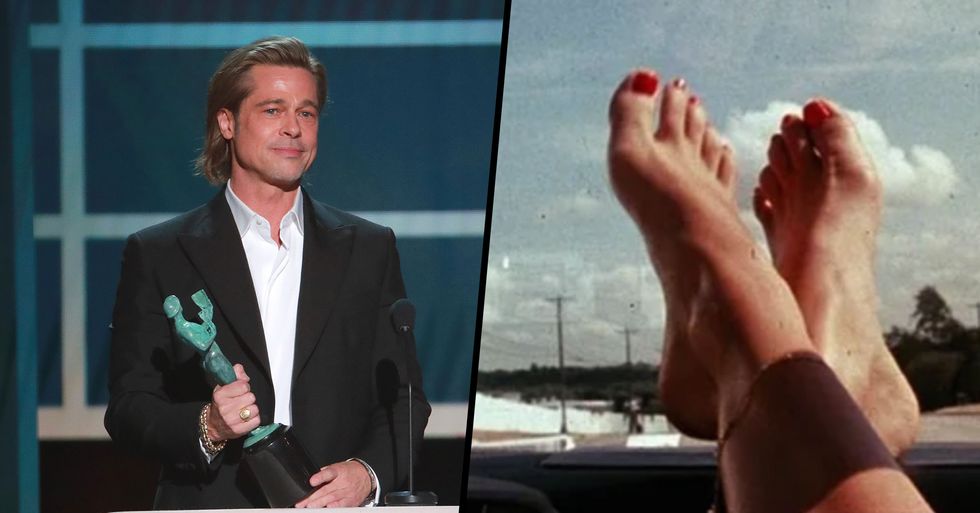 Last night SAG awards got us some seriously great Brad Pitt content. Whether he was sharing a private joke with Jennifer Aniston, or watching her adorably from backstage, the whole night was basically about these 2 besties (and potential lovebirds).

But there was another aspect to his Best Supporting Actor acceptance speech that got the whole internet talking. Pitt drew attention to a certain strange thing about director Quentin Tarantino's filming habits ... and the internet is feeling grossed out.

Everyone's favorite '90s couple, Brad Pitt and Jennifer Aniston seem to have managed to maintain a close friendship. Or, as some suspect, something more ...

Because last night at the SAG Awards ...

The pair were locked in an adorable private joke...

But that's not the only Brad moment to get the internet talking.

Because the two seemed to share an inside joke during Brad's acceptance speech.

(FYI, Brad picked up the Best Supporting Actor award for Once Upon A Time In Hollywood.)

And his speech captured the internet's attention - for a wide variety of reasons!

Which, unsurprisingly, got the Brad 'n' Jen shippers feeling excited.

And one joke, in particular, has ruffled feathers.

"Let’s be honest, it was a difficult part," Brad started.

But the punchline was the real kicker.

"A guy who gets high, takes his shirt off, and doesn’t get on with his wife. It was a big stretch." Woah. Quite the dig at Angelina Jolie, there!

And even more savage?

Jen's (clearly amused) reaction to the whole thing. We're feeling suspicious, all of a sudden!

But that's not all. Brad also brought up Quentin Tarantino's ... foot fetish.

"I wanna thank my co-stars, Leo, Margot Robbie, Margot Robbie’s feet, Margaret Qualley’s feet, Dakota Fanning’s feet ... Quentin has separated more women from their shoes than the TSA." And guess what? It seems like it's all true. Check it out ...

There's a lingering shot of The Bride resting her feet on a dashboard.

From Dusk Till Dawn

via: From Dusk Till Dawn

Jungle Julia rests her feet on the dashboard this time.

From Dusk Till Dawn

via: From Dusk Till Dawn

This close-up is complete with toe rings. Nice.

Only Tarantino would think of a high-heeled cast.

This foot appearance comes complete with a touch of the finger ... yikes.

Once Upon A Time In Hollywood

via: Once Upon A Time In Hollywood

The final appearance on our list - we can see why Brad Pitt noticed!

quentin tarantino at the table while brad pitt talks about his obsession with feet during his acceptance speech .. https://t.co/yq7p5z148r
— jackie volta (@jackie volta)1579484353.0

We just can't believe we never noticed it before! Fancy more from the SAG Awards? We've got a list of our best and worst dressed celebrities. Star of OUATIH, Margot Robbie, really dropped the ball on this one.