Brad has faced another struggle in his life. | 22 Words 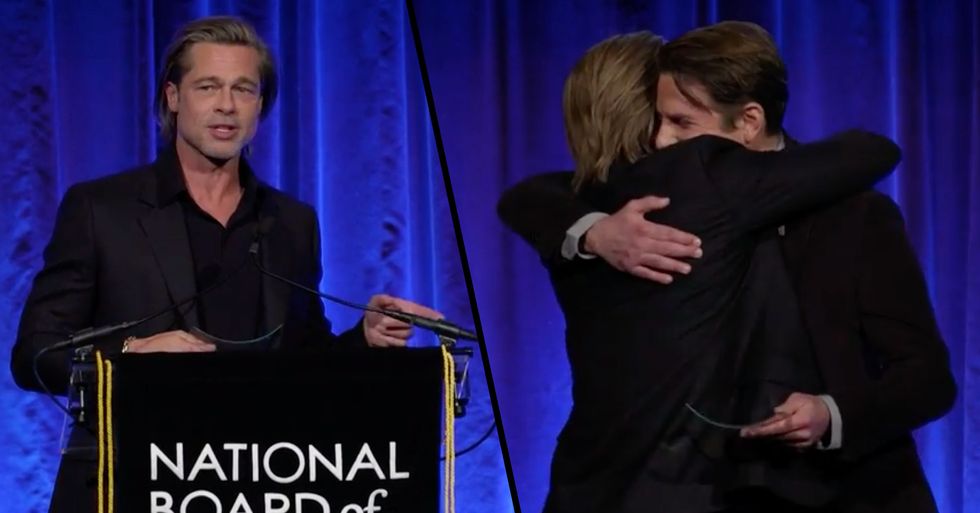 But it seems he's turned his life around. When accepting his prize for Best Supporting Actor at the National Board of Review Annual Awards Gala, he spoke out about his newfound sobriety - and credited it all to pal Bradley Cooper.

Brad has faced another struggle in his life.

In December he was interviewed by fellow actor Anthony Hopkins for Interview Magazine - and he opened up about his struggles with alcoholism.

And on Wednesday, he offered yet more insight.

Pitt appeared alongside friend and co-star Bradley Cooper at the National Board of Review Annual Awards Gala this week.

He even won the Best Supporting Actor award for Once Upon A Time In Hollywood.

And the award was presented by none other than Cooper. Cute!

During Pitt's acceptance speech, he thanked Cooper - and gave him a rather important credit.

"Thank you, Bradley. Bradley just put his daughter to bed and then rushed over to do this."

"I got sober because of this guy. And every day's been happier ever since."

Brad Pitt accepts the Best Supporting Actor Award for ONCE UPON A TIME IN HOLLYWOOD from Bradley Cooper at… https://t.co/eqaTWfvGNP
— Matt Neglia (@Matt Neglia)1578537104.0

"I love you, and I thank you." Another Pitt speech has gone viral this week, too. Scroll on for his Golden Globes acceptance - plus Jennifer Aniston's priceless reactions.