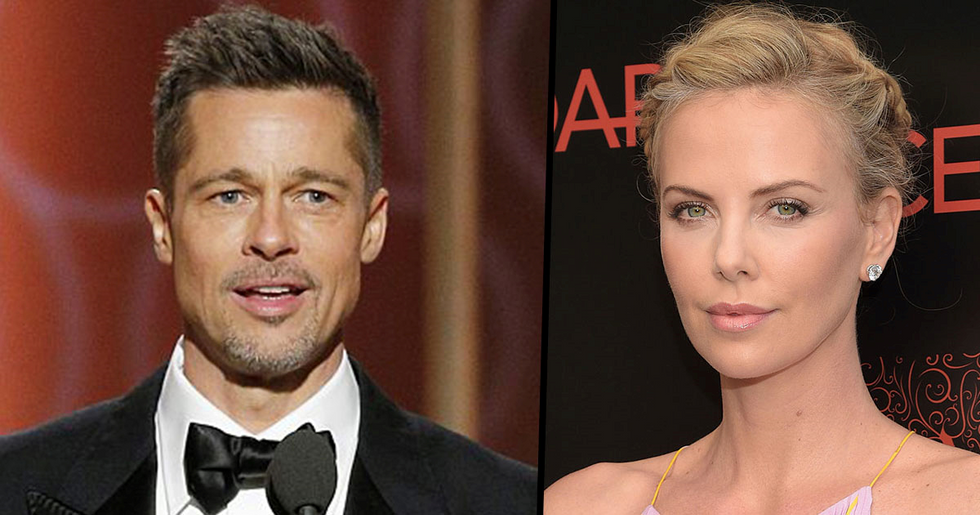 Could we be anymore excited about the news that Brad Pitt and Charlize Theron are an item? We think not.

Apparently there were seen getting close last weekend at a Roma event at Los Angeles' Chateau Marmont where Charlize was a guest of honour. She was seen sipping on a classic vodka cocktail, while he stuck to water, and allegedly they were extremely touchy-feely and very obviously involved.

Could this be the happy ending that both of these Hollywood stars have been looking for? We certainly hope so.

Let's check out what the rest of the world thinks about this surprise pairing.

Brad has had his fair share of beautiful women over the years, starting with the stunning Shalane McCall.

Brad met Shalane (aged only 15 at the time!) while he was working on Dallas in 1987. Not a long-lasting romance, it quickly fizzled out when he completed his four episodes of the show.

Next came the diva Sinitta.

An unlikely couple, Brad apparently bombarded her agent with calls as he was so desperate to meet her. Maybe getting his first touch of heartbreak, Sinitta dumped Brad after two years together.

He then hooked up with Mike Tyson's ex-wife.

Well, we could have told him this was a disaster waiting to happen. Their brief affair was over before it really begun when Mike caught the two of them in bed and threatened to end Brad. Oh dear.

Proving that blondes do really have more fun with Christina Applegate.

This match made in paparazzi heaven got together briefly in 1989 when Christina took Brad as her date to the MTV Movie Awards. Unfortunately it was not meant to be as Christina ditched him for another dude before the awards had even finished.

Although she was fresh faced and only 17 at the time, to Brad's 27, Juliette has only ever been positive about the 4 years she spent with Brad before he became super famous.

Who could forget the chemistry between Geena and Brad in Thelma and Louise?

Catapulting Brad into sex symbol status, this career changing film also gave Brad the opportunity to woo Geena Davis, who had the time was much more well-known in Hollywood than himself. We can only imagine what these two would have got up to together in secret?

And yet another romance with a co-star.

Brad and Julia starred as lovers in the 1994 film Legends of the Fall and rumour had it that they were also lovers off set too.

And then on the set of Interview with the Vampire . . .

Brad met and dated the gorgeous Thandie Newton. Unfortunately, unlike the life of a vampire, their love was not everlasting. They both claimed the split was amicable though and remain firm friends today.

Proving he's no angel either.

Not one to shy away from high profile romances herself, Demi had a brief relationship (if you can call it that) with Brad in 1998.

Who could forget this love affair?

Brad and Gwyneth met on the film set of movie Se7en and were together for three years. Sadly things came to end 7 months after Brad had proposed with Gwyneth citing she was too young to settle down.

Meeting in 1998, Brad and Jennifer dated blissfully for two years before they got married in a sensational $1 million wedding in Malibu. We were understandably devastated for Jennifer when they divorced in 2004 after Brad met and fell in love (lust) with Angelina Jolie on the set of Mr. and Mrs. Smith.

The scarlet woman herself.

The polar opposite of wholesome looking Jennifer Aniston, Angelina screams wonton sex goddess who would (literally) drink your blood. No wonder Brad's head (or other body parts) were turned so quickly. Six children later and Brad and Angelina were ready to divorce. We never saw that coming.

And now it has been revealed that Brad is dating Charlize Theron!

Could this be the new Hollywood golden couple? Sources have revealed that Brad and Charlize have been dating for the past month and are happier than ever with their new relationship.

Well not literally (that would be weird and a little bit gross). But they are both friends with him and that is apparently how they came to grow close.

Obviously we are psyched about this news but the former Mrs. Pitt does not look quite so happy about it.

Since the news broke Angelina has been spotted out shopping with son Pax and she did not look best pleased. Could it be because her ex has moved on with her known film rival Charlize?

Jennifer seems miles away on the shoot of her new TV show Top of the Morning.

We really want to believe that Jennifer has moved on from the love of her life Brad but deep down in our hearts we feel she still holds a candle for him.

Let's see what everyone else thinks.

Some fans have given them the thumbs up. We are feeling the love.

Others are experiencing the cringe factor.

It's kind of like when your old uncle gets a younger, hotter girlfriend. Or is it?

When you don't want to give a sh*t but really you do.

Fickle celebrities, they are always swapping partners. Can we keep up? No. Do we want to? Secretly yes.

What is happening in the world?

You think you know where the world stands in the natural order of things and then something like this happens? Although we are not sure this is quite as bizarre and damn right wrong as Liam and Naomi. Eww.

I'm all shook up.

Are we happy? Are we grossed out? No idea yet, but one things for sure we are definitely in shock.

Yes we know Brad is getting on a bit but let's be honest, he's not exactly ageing badly is he?

Unfortunately in the glitzy world of Hollywood it is hard to find anyone who has not previously dated another actor or famous TV star. That's just the way it is. And as sloppy seconds go, Charlize isn't looking too bad.

Do we hear wedding bells?

One fan is concerned that Brad has fallen hard and will soon be proposing to the lovely Ms. Theron. Would that really be so bad? We love a wedding.

When someone doesn't even deserve to be included in the sharing of gossip.

Seriously men, you need to keep on top of your celebrity gossip! You cannot go around thinking that Brad is still with Angelina. What's next? Is Tom Cruise still with Katie Holmes? I mean really.

Does Brad realise how similar Charlize and Angelina really are?

Yep, although appearance-wise they could not be anymore different, they are in actual fact very alike.

Both have adopted children.

Angelina is of course famous for her large brood of both biological and adopted children; Maddox, Pax and Zahara. Charlize also has adopted children from underprivileged  countries and has son Jackson and daughter August.

Neither are afraid to get gritty to win an Oscar.

Both have dabbled in drugs.

Whilst Angelina is infamous for her druggie past in which she admitted to using cocaine, heroin, ecstasy and LSD, Charlize Theron is no angel herself and has previously revealed that she used to be a 'waker-and-baker.' Clearly Brad has a type.

It's not often you get two huge stars getting together. So be excited, and welcome 2019's hottest couple.