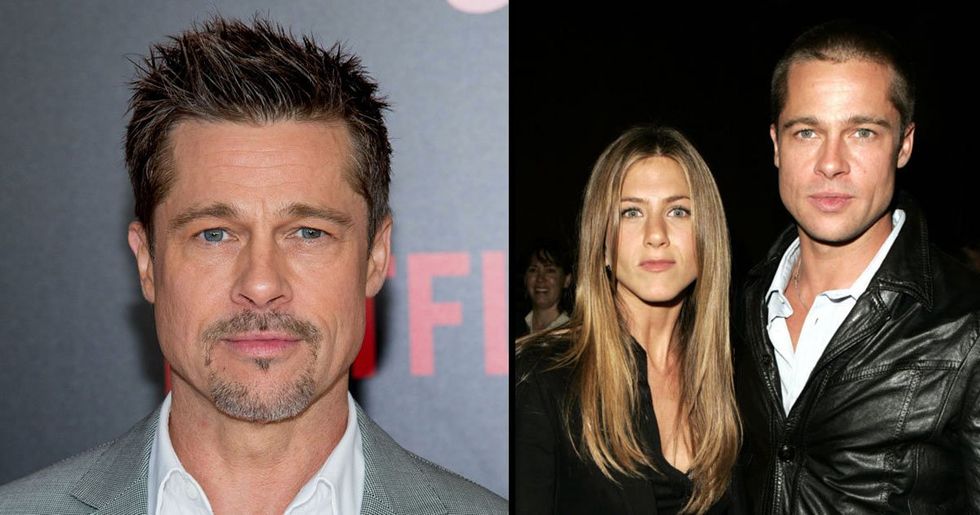 Jennifer Aniston and Brad Pitt were once the Hollywood couple…

Both stars in their own right, the couple became the pinnacle of celebrity marriages, with Brad Pitt even making a guest appearance on Aniston’s hit tv show, Friends. However, in 2005, the relationship came to an end when Pitt publicly left Aniston for Mr and Mrs Smith co-star, Angelina Jolie, sparking a relationship and, eventually, a marriage.

And now it seems that Pitt’s eye is being drawn back to his ex-wife, and in the most extreme way. It seems that Brad has no qualms on spending a fortune on Aniston now that he is single. Scroll to the bottom of the article to see what Brad gave to Jen for her birthday - you won't believe it!

Brad Pitt and Jennifer Aniston were the Hollywood dream.

After marrying in 2000, the couple became the pinnacle of the celebrity relationship, with their love becoming an inspiration to a whole generation of fans.

They were most definitely the most beautiful Hollywood couple at the time (maybe ever?).

And they supported each other through everything.

The couple were also not shy to parody and joke about their own relationship, in 2001, Brad Pitt appeared in an episode of Friends, wherein his character loathed Aniston’s character, Rachel Green.

They were the perfect match.

Because then along came Angelina.

Pitt met and fell in love with Angelina Jolie during their filming of the action-comedy, Mr and Mrs Smith.

And it caused nothing but controversy.

Although both actors swore there was no infidelity, their blossoming romance soon brought an end to Pitt’s marriage, with Aniston filing for divorce in 2005.

But it seemed that Pitt and Jolie might have been made for each other.

Although their relationship caused sparks, Pitt and Jolie soon became cemented as another iconic duo, getting married in 2014.

However, it wasn’t meant to be…

It was all a bit confusing, but, as of last year, both Jolie and Pitt are both now legally single, although it seems that they are yet to actually be divorced.

It seems that his eye keeps wandering towards his ex-wife.

They've have never really been out of each other’s lives.

Although the couple divorced, Pitt admitted in a 2009 interview with W Magazine, that he and Aniston “check in with each other." Showing a commitment to each other as friends.

Aniston herself had moved on from the divorce.

Although Aniston spent many years as a famous single, she eventually re-married in 2015 to Justin Theroux, but their relationship ended in 2017.

And now Brad is back.

It shocked many fans and reporters when Pitt made an appearance recently at Aniston’s 50th birthday bash.

And Brad brought an interesting gift.

At a birthday party, you'd typically expect cake, music and gifts. Nothing too fancy, but something fun for the birthday girl to open.

Well, it seems that Brad didn’t quite get the memo.

Because he got his ex-wife something pretty extravagant.

And you won’t believe what it is.

When the couple first divorced, Aniston admitted that she would miss their Beverly Hills home, which was on the market at the time.

Apparently, the loss of the house made the divorce much worse.

According to the Evening Standard, a close friend of Aniston’s said that "losing their dream home worsened the heartache of their divorce and it was one of her biggest regrets not buying Brad out".

Now it seems that Jennifer may have gotten her birthday wish.

Brad Pitt apparently splashed out a whopping $79 million to buy the house back, giving it to Aniston as her birthday gift!

And Aniston was genuinely touched.

Apparently, Aniston got very emotional at the prospect of returning to her old home, especially after she and Pitt had spent the party supposedly reminiscing about old times.

Could this be the renewal of an old relationship?

Maybe this is a sign that the couple are hoping to return to the golden days of their relationship – a time before Jolie and Theroux.

And it seems that they have their supporters.

Although the prospect of Pitt and Aniston getting back together could be controversial, especially so soon after his divorce from Jolie, it seems that they have quite a bit of support.

What are friends for?

One such supporter just happens to be model, Caprice Bourret, who has gone on record to say that the couple are “the perfect match."

Bourret has also spoken out about her interactions with Jolie.

And they don’t sound pretty.

Some would find lunch with Angelina Jolie an amazing experience...

In an interview with New Magazine, the 47-year-old model also stated that Pitt had always been an “Aniston Man", and was not suited to 43-year-old Jolie.

"I had dinner with Brad Pitt and Angelina Jolie separately, though I can't remember if they were married at the time. Brad was amazing, Angelina was a b****. She didn't say one word the entire night. She just sat there looking into space."

We don't think we can blame Jolie for that...

She was probably just thinking about what she could spend $79 million on.

As of now, she is yet to comment on Pitt’s extravagant gift.

But who knows where this will lead?

Maybe Pitt and Aniston will decide to move into the house together?

Or maybe Pitt is just a real good friend.

We can only wait and see.

We wonder what else she got for her birthday?