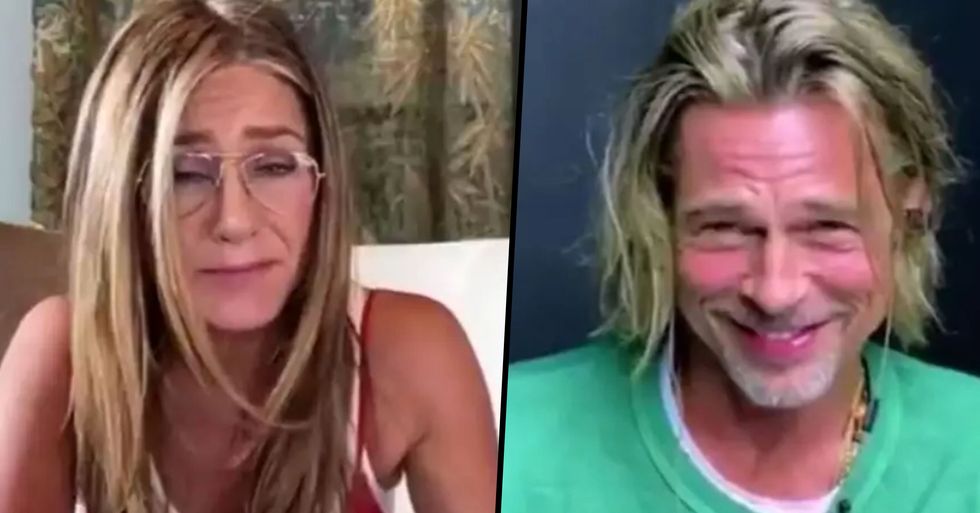 Jennifer Aniston and Brad Pitt have reunited for the first time in months, and people are losing it. But everyone seems to be only talking about one particular interaction when Aniston calls Pitt "sexy" and he looks so awkward. Yikes!

The couple made their first appearance together in months...

And people are going crazy over it! But things have now taken an awkward turn...

But now, Jen and Brad have made yet another reunion...

After weeks of delay due to the pandemic, the virtual table read of Fast Times at Ridgemont High streamed today...

And of course, Brad and Jen are involved!

But now, everyone's talking about something else.

During one moment of the show, the pair were reading out a well-known script of a scene in which Jen was playing high school "sex queen" Linda Barrett and Pitt was playing the character "Brad Hamilton."

And with Morgan Freeman doing the narrating, things took an awkward yet risque twist.

Freeman says: "Her eyes filled with desire as she says..." Which prompts Jen to read the next line.

"Hi Brad, you know how cute I always thought you were. I think you're so sexy. Will you come to me?"

Pitt, who has recently been rumored to be in a new relationship, looks down at the script awkwardly while chuckling to himself as Freeman carries on with his narration.

And if you thought it was awkward already, then prepare yourselves as the script gets steamier.

"She reaches out and grabs him for a kiss, pulling him close... then she pushes him away, so he can watch as she carefully unstraps the top of her bathing suit..." Um...

"They're just about to fall into passionate lovemaking when we hear..."

Linda (played by Jen) then rips Brad (both Brad in the scene and real-life Brad) out of the daze he's in by asking: "Hey Brad, do you have any Q-tips?" The scene closes.

I know we asked for a reunion between the two, but we wanted them both to be single when it happened.

But we'll take what we're given. We love them.

And in the meantime, have a read about how fans believe they spotted Brad Pitt at the back of a new Courteney Cox and Jennifer Aniston video...