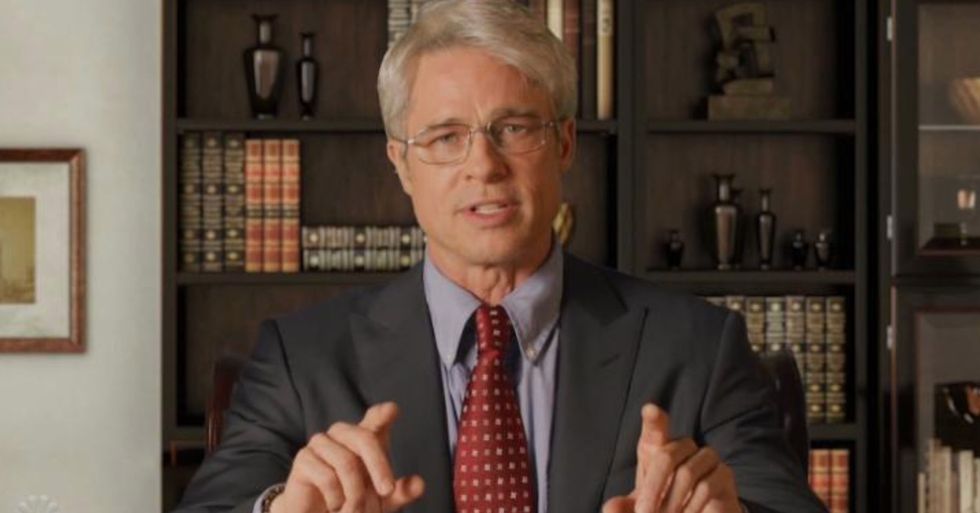 Chloe Rowland
Brad Pitt has bagged himself an Emmy nomination for a recent skit on SNL. But it seems that the announcement has well and truly divided opinion among fans, for one very specific reason...

On September 21st we're set to see the biggest stars in television come together for the annual Emmy Awards, with a huge array of the world's favorite shows and stars in the piping line for an award.

And this week, we finally got the hotly anticipated list of nominees.

It's safe to say, there's going to be some tough competition for the big categories.

But there's one nomination that really stood out for many.

And it's stirred up a strong reaction online.

Brad Pitt has had a career that any actor would be envious of.

Born in 1963, he’s been acting since ’87, starring in several box office smash hits along the way.

The actor starred in the horror movie Cutting Class, and while it wasn't exactly his breakthrough role, it saw him enter the industry he went on to dominate.

But, his role in 1994's Legends of the Fall is where things started to change.

The flick helped cement his position as the Hollywood staple we know today.

He first really came to fame, though, in the 1991 classic Thelma and Louise.

The classic crime flick is widely considered one of the best of its time, and while Pitt's role was only minor, he certainly made an impact.

Since then, he’s gone on to star in films and television shows of all genres.

Including the likes of The Curious Case of Benjamin Button, Moneyball, 12 Years a Slave, and the more recent Once Upon a Time... in Hollywood, proving he's also capable of taking on grittier roles.

Alongside top acting prowess, Pitt has another tool in his belt.

He’s regularly thought of as one of the best looking men in Hollywood – and he has the little black book to prove it.

Over his years in the spotlight...

Pitt has been in a number of high-profile relationships namely with the likes of Jennifer Aniston and Angelina Jolie, that saw him regularly hitting the headlines.

But this week, he's been hitting the headlines for a very different reason.

Pitt is in the pipeline for a very lucrative accolade... an Emmy award.

As this year's nominations were revealed on Tuesday, opinions were divided when people saw that Pitt had landed himself on the list.

The star scored an Emmy nomination in the outstanding guest actor in a comedy series category for his portrayal of Dr. Fauci on Saturday Night Live. Read on to see the clip for yourself...

Dr. Fauci is one of the most prominent members of the Task Force for The White House.

And he is widely regarded as one of the world-leading experts on infectious diseases.

But it seems that Fauci already knew Pitt was the man for the job.

Earlier that month, Fauci was asked by CNN who he'd like to play him on Saturday Night Live, to which he responded, "Brad Pitt, of course."

Pitt appeared as Fauci in an April episode of the NBC sketch series.

The last 3 episodes of the season had to be filmed remotely due to the ongoing pandemic.

Pitt can be seen donning a grey wig and a suit during the sketch...

"First, I'd like to thank all the older women in America who have sent me inspiring — and sometimes graphic — emails," he begins.

During the skit, Pitt briefly broke character to issue an important message to the real doctor.

"And to the real Dr. Fauci, thank you for your calm and your clarity in this unnerving time," Pitt said. "And thank you to the medical workers, first responders, and their families for being on the front line."

Fauci himself later lavished Pitt with praise for his portrayal...

"I think he did great," he said at the time. "I mean, I'm a great fan of Brad Pitt, and that's the reason why when people ask me who'd I like to play me I mention Brad Pitt because he's one of my favorite actors. I think he did a great job."

While many people loved the clip...

Fans were pretty shocked that it managed to scoop an Emmy nomination.

Not everyone felt it was a deserving nomination.

Especially since the skit was only 3 minutes long.

It's not unusual for an SNL skit to bag a nomination, but that didn't stop people from expressing their frustration.

Others were quick to make jibes at the nomination.

Not everyone was overly impressed.

And of course, a select few couldn't help but bring The White House into it...

We all knew it was coming.

Pitt will be going up against some tough competition in the Emmy category.

You can watch the clip in question below:

The 72nd Primetime Emmy Awards air on September 21st, 2020. What do you think? Was it a deserving nomination? For more on this year's Emmy nominations, keep scrolling...