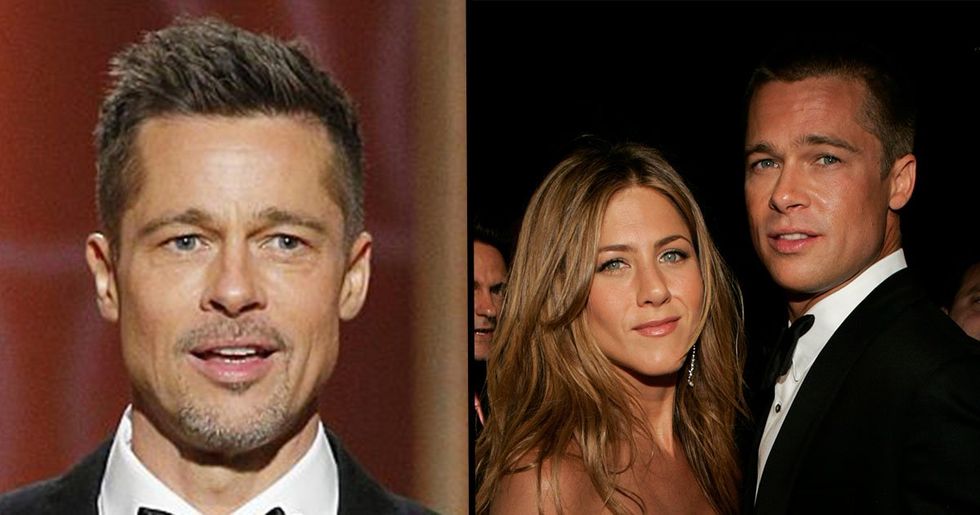 It was set to be the most lavish, star-studded event of the year but who could have predicted that Brad Pitt himself would turn up at Jennifer Aniston's 50th birthday bash? Definitely not us.

The epic party took place on Saturday at the Sunset Tower Hotel in Los Angeles with A-list guests including Amal Clooney, Kate Hudson, Ellen DeGeneres and of course, Jen's life long friend Courtney Cox. But all eyes were on Brad when he sneakily tried to bypass the paparazzi in a flat cap and enter the party unnoticed.

Fat chance of that happening! The eagle eyed press noticed Jen's former husband immediately and speculation has gone wild over his attendance.

Did Jen personally invite him? Does this mean they are friends again? Or even more shockingly, are they getting back together? Too many unanswered questions!

Brad and Jen started dating in 1998 after being set up by their agents. These two were the picture perfect couple. Such a shame there was no Instagram in those days.

Even though initially they wanted to keep things quiet, they were often papped out and about together.

Here they are in the early days enjoying a Radiohead concert together. Although they don't look overly happy, their body language says it all.

They went on to get married in 2000 in a lavish ceremony in Malibu.

Brad and Jen went all out with security for their wedding but that didn't stop the paparazzi from trying everything and anything to get a shot of the big day. Guests included Courtney Cox, Ed Norton, Cameron Diaz and Salma Hayek .

Sharing their love of comedy in Friends.

Brad starred in the eighth season of Friends in the episode called The One With The Rumour. It was hilarious to see these two acting together and it made us love them even more. Their love just seemed so simple and genuine.

The couple still looked loved up at the Emmys in September 2004.

Both so naturally attractive, every picture of this couple at a red carpet event is flawless. How could it not last forever?

But not long after they were spotted looking tense.

Jen's drawn face and Brad's forced smile let to speculation that the golden couple's marriage was on the rocks.

Then came along the woman that would change everything.

The polar opposite of girl next door Jennifer, Angelina oozed sex appeal and always seemed to look like she had a dirty little secret on her mind. Jen didn't stand a chance.

No-one could fail to notice their undeniable chemistry in Mr and Mrs Smith. Especially Jen.

A mere matter of months into the filming of this, shall we say disappointing film, and the tabloids were already going into meltdown over the onscreen chemistry between these two and rumours that they were seeing each other in a non professional way away from the camera.

And then came Jen and Brad's inevitable divorce in October 2005.

Although no one was surprised by this point, fans across the globe were devastated that Hollywood's golden couple were officially over. The general feeling was, if Brad and Jen couldn't make it work, what hope was there for the rest of us.

Brad went on to marry Angelina in September 2014.

They had a quiet ceremony at their chateau in France after nearly a decade together and two years of being engaged. Apparently it was the children who were most keen for this pair to get married. Never a good sign.

Jennifer finally found happiness again herself when she married Justin Theroux in August 2015.

After a few other relationships that didn't go the distance, Jen started dating Justin in 2007 and finally tied the knot with him in 2015. Sadly things did not work out for this couple and they divorced in 2017, apparently due to Justin acting like a single guy when he was away from Jen. Although neither have confirmed this and both say that they remain friends.

And of course, we know that Angelina filed for divorce from Brad in 2016.

This was never going to be an easy split with six children, numerous properties both in the U.S and abroad and the fact that they are both multimillionaires. In fact, they still haven't managed to finalise the divorce.

Brad and Charlize were apparently introduced through mutual friend Sean Penn and are currently happily enjoying each other's company. Although it is definitely early days for these two.

Which brings us to the current day and Jen's recent birthday bash.

Not that we can believe that the gorgeously youthful Jen is even close to 50 but rather than hide and mourn the loss of her youth, she decided to throw an epic bash and invite every party-loving celeb she could think of. Jen is one popular lady.

She arrived at the Sunset Tower Hotel in Los Angeles on Saturday but did she know a blast from her past was going to make an appearance?

Looking sexy and stylish in a black jumpsuit that showed off her tanned and toned back, Jen looked ready to party hard. Was all this effort for a certain someone's benefit?

The paps went into overdrive when Brad was seen sneaking into the event.

We believe he was trying to look inconspicuous in a driving cap but sorry Brad, you failed. Epically. Did you really think that you could attend such a high profile bash, especially one that has been organised by your ex-wife without anyone noticing?

Apparently Jen's friends were not shocked to see him there.

Sources have revealed that since Jen split with Justin, she and Brad have been pleasant towards one another and speak occasionally. Good for Brad, Jen has had a hard year so she needs to be surrounded by people who care about her.

Although we felt more like this upon finding out.

This is like the news of the century. Exactly what we have been waiting for since they split back in 2005. Maybe we are jumping the gun a little bit, he did just go to her party. It's hardly a declaration of undying love.

Maybe they are just friends now, but some feel that Brad should just stay out of Jennifer's life as she has never truly gotten over him. We really hope that's not the case.

Or maybe they are each other's one true love.

Could it be that after so many years, other marriages, children and divorce, that it was always meant to be Brad and Jen? We've always thought this.

The best revenge is being happy.

Apparently Jen did not give Brad much attention but just enjoyed herself with all her friends. You go girl! Shake that booty.

Does this mean that Brad is secretly still holding a torch for Jen?

Even if she seemed uninterested, we wonder how Brad behaved. Yes, we know Brad is dating Charlize but him and Jen just have so much history. Can they ever really just be friends?

Whatever happened with Brad, it looks like Jen enjoyed herself.

She's always been one of the girls and this pic shows Jen letting her hair down with Kate Hudson and Gwyneth Paltrow. As if we would expect anything less.

And of course, Jen's best friend Courtney Cox was having a blast too.

This pair met on the set of Friends and have remained the best of friends ever since. They are often seen out together and are always there for each other in times of need, with Courtney stepping up when Jen and Brad split and Jen returning the favour when Courtney and David Arquette split in 2010.

Looking like they'd had a fair few drinks by this time, we love this hilarious photo of the girls with their tongues cheekily poked out, not caring what they look like. Now that's our kind of party.

And the oh-so-elegant Amal Clooney.

With her gorgeous husband of course. Who apparently could not keep his eyes off her, and who can blame him?

Sandra Bullock was yet another glamourous guest who came with her boyfriend of three years, Bryan Randall.

Sandra and her beau are not often spotted out together but were seen holding hands and looking every inch in love. Ahh!

Orlando Bloom and Katy Perry arrived in style on motorbike.

Never a pair to do things quietly, this feisty couple arrived on two wheels instead of four and Katy was dressed in a stand-out black, leather-inspired jumpsuit. These two were definitely ready to party.

Apparently even John Mayer was there.

Not one ex but two. Seriously Jen what were you thinking? Why unnecessary  pressure on yourself at an already stressful, big event?

Not to mention the other exes flying around.

We know Hollywood is a little bit insidious but this really takes the biscuit. How is it possible that so many exes can be in the same room without sparks flying? Could more have gone on that we don't know about?