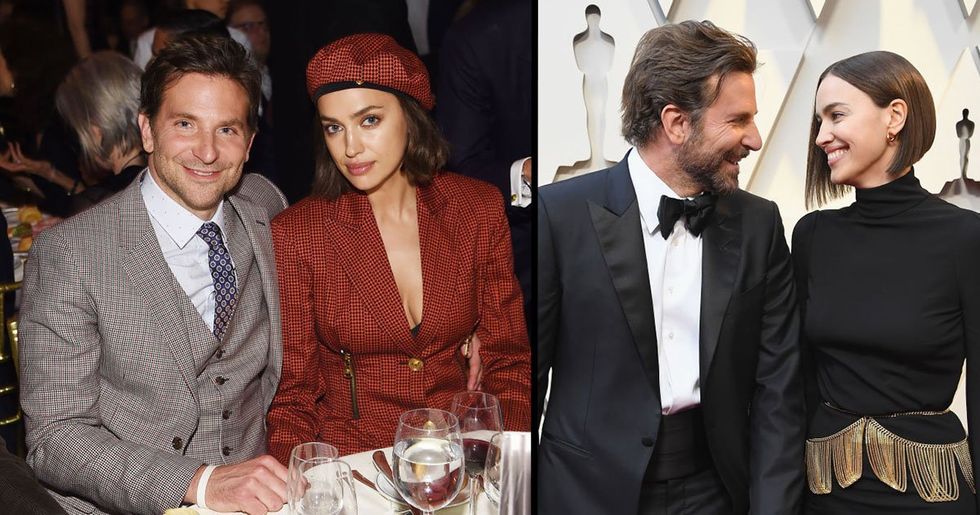 Having your relationship play out in the public eye is hard for anyone and undoubtedly piles on the pressure, but it's hard to ignore the endless rumors surrounding Bradley Cooper's love life since the release of his Oscar-nominated movie A Star is Born co-starring singer, Lady Gaga.

While the musical love story has been a box-office success, it seems that since its debut, Cooper's relationship with his supermodel girlfriend, Irina Shayk, has been put to the test with fans insisting, or at least, hoping, that "Bradga" (that's Lady Gaga and Bradley Cooper's "ship" name) is a thing.

And now it seems like there's been another major development in the saga as Cooper and Shayk have finally buckled under the pressure, and there have been plenty of reactions on Twitter today about who may be to blame...

So, let's start with introducing the trio...

Bradley Cooper made his acting debut in the classic '90s series, Sex in The City starring as "Jake" and has since propelled into Hollywood stardom, starring in smash-hits including The Hangover Part 2, several Marvel films and, of course... A Star is Born (which was also his directorial debut).

Next up is Irina Shayk...

Shayk is a Russian supermodel who entered the global modeling radar in 2007, when she became the exclusive contracted face of Intimissimi lingerie.

Finally, we have Lady Gaga.

The singing sensation, whose real name is "Stefani Joanne Angelina Germanotta," burst into the charts in 2008 with her single, "Just Dance". Known for her outrageous fashion and endless support for the LGBTQ+ community, the Italian-American singer has quickly become one of the icons of this generation.

Cooper and Shayk first sparked relationship rumors in 2015 after the supermodel split up with a very famous soccer player...

The pair were spotted attending Broadway's "Finding Neverland," just a short while after Shayk split from soccer star, Cristian Ronaldo.

This picture, taken at the 2018 Met Gala, was the last time that the pair graced the red-carpet together until the A Star is Born awards season stint, but we'll get into that later...

All might have been plain sailing in Bradley and Irina land, but that was about to change as Cooper began production for his A Star is Born movie that year - the first time that the actor had taken the plunge by directing and starring in a movie.

Bradley chose Gaga for the film for a very good reason...

Despite having met Gaga briefly in 2016, it was at a benefit concert where the songstress performed Édith Piaf's "La Vie en Rose" that inspired the actor to cast Gaga for the role of Ally and write the song for the movie. However, Cooper admits that, beforehand, he didn't have much knowledge of who Gaga was as an artist: "I was at a cancer benefit with my mother. I really did not know Lady Gaga’s music," he told W magazine. Cooper was so starstruck by Gaga's performance that the very next day, he requested to formally meet her to discuss his upcoming movie. “I called her agent the next day and said, ‘Can I go to her house and meet her right away?’ I drove to Malibu, and we sat on her porch, and the next thing I know, I'm eating spaghetti and meatballs," Cooper said.

This isn't the first time that Lady Gaga has branched into acting...

Though some questioned Cooper's choice of Lady Gaga for the movie, the singer has actually branched out into acting before, most notably starring as the countess in Ryan Murphy's American Story Season 5. But, starring alongside Cooper in A Star is Born marks the singer's box office debut.

If you somehow haven't watched the film, here's a brief summary.

Bradley's version of the film is actually the third remake. Centering around the themes of love, addiction, and co-dependency, it features Cooper starring as Jackson Maine and Gaga as Ally. After Maine discovers Ally as she performs "La Vie En Rose" (ironically, the same way Cooper met Gaga) in a drag bar. The pair then develop a truly breathtaking romance, having us all invested in their evolving romance. Fans couldn't get enough, with the movie becoming an instant hit.

But the movie fuelled romance rumors between Gaga and Cooper.

The pair may have shared a lot of on-screen romance, but it seems like that fans noticed chemistry off-screen too. So, how does Shayk feel about this? Don't worry, we're coming to that...

The film received several nominations and awards, including an Oscar, but cinema aside... even though the pair's on-screen romance was strictly fictional, fans couldn't help but notice the off-screen chemistry between the pair.

Gaga is currently in the middle of her Las Vegas residency, and during one of her shows, she managed to convince Cooper to join her on stage to sing "Shallow" - the lead song from the movie. The pair once again looked very close as they sat at Gaga's piano to perform the hit song. Once again, Irina was nowhere to be seen.

The pair intimately performed "Shallow" during the Oscars in February while Bradley's girlfriend helplessly watched.... awkward.

The performance was so intense that Gaga had to speak out...

Speaking on the Jimmy Kimmel Show, the star finally set the record straight. “This is a love song, ‘Shallow.’ The movie A Star Is Born, it’s a love story. We worked so hard, we worked all week on that performance," Gaga said. Gaga then referenced her longtime friend, Tony Bennett... "I’ve had my arms wrapped around Tony Bennett for three years touring the world. When you’re singing love songs, that’s what you want people to feel," she said. “No. I’m an artist, and I guess we did a good job. Fooled ya!"

Well, as for the suspiciously intimate Oscar's performance, Shayk was said to be "unbothered"... even congratulating Gaga and Cooper for the show. But more trouble was to come...

Gaga and Cooper haven't been spotted together since awards season drew to a close. But, Cooper and Shayk were left "questioning" their relationship.

The pair haven't hit the red carpet together since the Oscars in February.

Apparently, the couple have been going around in circles.

A source told E! News two days ago that the two were unsure whether they should stay together and that while they do want to stay together for their 2-year-old daughter, neither of them is happy. The couple struggled to reach a solution - spending time apart as a result. "Things get a little bit better but then they find themselves back in the same place of questioning whether being a couple is what's best," the source said.

Despite being reluctant to split, it seems like the couple have called it a day...

Reports surfaced today that the pair have officially ended their four-year relationship, despite "trying out different arrangements and trying to find their way".

They are now trying to work out how to co-parent their daughter... but the burning question is, why have they gone their separate ways?

The couple are currently trying to work out how to share custody of their daughter, Lea De Seine. But, Shayk hinted that there may be issues last month...

There was no sign of Bradley at this year's Met Gala, with Shayk attending on her own.

The question that everyone's asking is... did Lady Gaga have something to do with the couple's split?

People have been quick to chime in with their theories as to why Cooper and Shayk's relationship headed to a close - the most popular theory being that Gaga had something to do with it. But, the singer reportedly had "nothing to do" with the pair's recent relationship struggles.

Although Gaga seemingly has nothing to do with Cooper and Shayk's relationship problems, it seems like people just can't help themselves.

One Twitter-user said that they saw the split coming after that Oscar performance.

News: Bradley Cooper and Irina Shayk have broken up Anybody who watched the Oscars: https://t.co/AzWfhFbE5l
— Media Critic (@Media Critic)1559879688.0

This user joked about how Gaga and Cooper's performance of "Shallow" probably caused the split.

This one is a personal fave.

People are willing Gaga and Cooper to get together.

*Bradley Cooper and Irina Shayk have split.* Bradley and Lady Gaga shippers waiting to see them together like https://t.co/I9l2nUNKlq
— Siobhain (@Siobhain)1559875054.0

Some people are saying that Gaga will swoop in now the Cooper is single.

But, whatever happens, we hope that the couple work it out.

Even though many people are hoping for a real-life Jackson and Ally reunion, we hope that Cooper and Shayk manage to come to some sort of resolution.