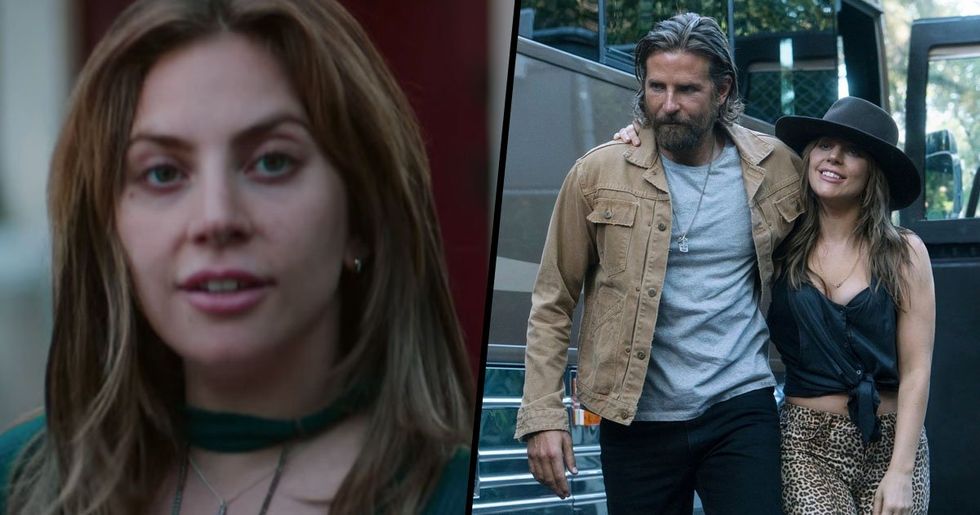 Lady Gaga is known for a few things - killer pipes, a lovable weirdo vibe, and some extreme, high-fashion looks. When you look back over the star's career, one thing really stands out: she's never far from an extravagant and editorial makeup moment. Looking like a beautiful alien has long been a part of Lady Gaga's identity.

Which is why, when fans saw A Star Is Born, many were shocked by Gaga's appearance. With mousy hair and a scrubbed-clean complexion, the over-the-top stage looks couldn't have been further away. In fact, some even described her appearance in the movie as unrecognisable.

Well, now we know why. Lady Gaga has revealed the reasons for her slightly dowdier appearance in the award-winning movie - and the fact that they came from her leading man and co-star, Bradley Cooper himself.

Lady Gaga is an American singer, songwriter, actress and all around celebrity.

She was born Stefani Joanne Angelina Germanotta in 1986, in New York City. Gaga has made a name for herself as an unconventional, provocative pop star, and part of the way she does this is through her looks.

Gaga is not one to shy away from an eccentric look.

One of her most iconic looks?

Her "meat dress." Gaga turned up to the 2010 MTV Music Awards donning a dress and fascinator made entirely out of prime steak.

And who can forget the "egg" look?

In 2011, Gaga arrived at the Grammy Awards inside a large fake egg, carried by her assistants. The look was supposed to symbolise rebirth and transformation... or something.

Gaga has certainly had some unusual looks over the years.

Here she is in 2009 at the Accessories Council's Annual ACE Awards, wearing a bra, knickers, and a close fitting facial veil, complete with a towering, backcombed hair do.

She has so many looks, it's difficult to say which is the most famous.

This mannequin of the singer plumps for her Telephone video look - a subtle vibe featuring soda-cans as hair rollers and cigarettes as sunglasses.

Gaga can also turn out a more conventional look.

Although she always gives classic glamour a slightly offbeat twist, with her silvery hair, statement brows and carefully curated makeup.

There's no denying Gaga is a fan of the slap.

This is actually a fact she played on in her Applause video, which is all about the superficiality and demands of celebrity.

Though she's most famously a pop star, in 2018 Gaga expanded her horizons.

Gaga starred alongside Bradley Cooper in the remake of the musical classic, A Star Is Born. In the film, a hard-living, jaded musician discovers a surprisingly talented young singer who has been held back by her appearance.

That plain and dowdy young woman was played by Gaga.

Ally (Gaga's character) shared with Cooper's Jack that she has faced constant trouble pursuing her dream of musical stardom, thanks to her lack of glamour and conventional "beauty."

Alongside the musical success she enjoys, there's some romance along the way, too.

And Lady Gaga revealed something surprising about the film's behind the scenes.

Speaking to the LA Times, Gaga revealed that her makeup-free look in the movie wasn't just a personal, aesthetic choice - but was actually a rigorously enforced part of the acting process.

Cooper wanted to strip back Gaga to benefit her performance.

As Gaga is so well known for all of her proverbial bells and whistles, the casting directors and Cooper thought that it was important to show a much more pared down version for the film.

Gaga was first introduced to this idea in a 2016 screen test.

The LA Times article depicts the instance. "Until that moment in 2016 [...] Gaga didn’t realize how much she wanted the part — one played by Janet Gaynor, Judy Garland and Barbra Streisand before her. And to get it, she was going to have to “completely let go and trust" Cooper. She couldn’t be that girl from the Lower East Side who spent hours doing her makeup before her gigs. She had to let the camera zoom in on her face wearing chapstick and eight-hour cream and nothing else."

The stripped back look not only removed any traces of Gaga's "artifice," but encouraged a level of intimacy with Cooper.

"She walked downstairs and there he was, staring at her. He stepped toward her, examined her face: concealer, mascara, rouge.

She noticed something in his hand. It was a makeup wipe. With it, he erased the colors from her forehead down to her chin."

The leading lady in the movie has a complicated relationship with her appearance.

“It put me right in the place I needed to be, because when my character talks about how ugly she feels — that was real," Gaga told the LA Times. “I’m so insecure. I like to preach, but I don’t always practice what I preach."

There are parallels between Ally and Gaga herself.

The LA Times piece goes on. "To play Ally, Gaga tried to distance herself from all this. She remembered the little girl who grew up obsessed with Garland — the one who would watch the Oscars wrapped in a gown made of blankets, accepting a fake Oscar on a crate in front of her television. And she thought a lot about how she came up in the music industry when — just like her character — she was told she had the right sound but not the right look."

We can't imagine going makeup-free was easy for Gaga.

Although, needless to say, it certainly helped create a truly beautiful (and award-winning) performance.

She certainly has a more stripped-down vibe in the movie.

Gaga's lack of makeup may also contribute to the sweet vulnerability of her character, and allow for a more realistic and intense love story with Cooper.

Some even credit this decision with some of the film's enormous success.

You have to wonder whether such a believable, intensely raw and emotional performance could have happened if Gaga was in her usual extravagant get-up.

People were also quick to point out how naturally stunning Gaga is.

It's true that she looks very different without her hair, makeup and costumes - but there's no denying that Gaga is still super attractive, even in her pared-back, understated look.

However, there are some issues with this story.

The problematic nature of essentially forcing a woman to change her appearance wasn't lost on Vox, who published an interesting take on the story.

The piece points out the issues of associating a woman's appearance with her character.

For example, the idea that a women wearing makeup is in some way artificial, unauthentic, or in some way distant from her "real self" is a dangerous one.

These issues to do with female appearance are rife in all the film's incarnations.

I need to say this. To everyone - including entertainment media - falling all over Bradley Cooper wiping makeup off… https://t.co/CXhYQPfLUP
— Toni Ruberto (@Toni Ruberto)1537112150.0

The scene described in the LA Times is actually played out almost exactly in the 1954 version of A Star Is Born, starring Judy Garland and James Mason.

But there's a more prescient issue than these philosophical musings on beauty.

The fact that this was something enforced upon Lady Gaga (at the hands of a bunch of men, no less) makes the whole thing seems a little controlling, manipulative and even scary.

Plus, it's not like Gaga's makeup free face made the public stop focusing on her appearance.

In fact, it appears to have done quite the opposite, igniting a huge public conversation about how Gaga looks, whether with makeup or without.

I’m the movie A Star is Born, Lady Gaga looks better natural than all that makeup.
— samantha sabina (@samantha sabina)1548477382.0

Whether she's wearing an editorial, beautifully weird full face of makeup, or going au naturel, people will always bring the conversation back to her appearance.

We think she looks great either way - but that's really not the point.

Gaga is a real tour de force in A Star Is Born - as her award wins prove. Plus, no one has discussed that fact the Cooper, too, was makeup free for his role in the movie.

It doesn't seem like her experience on set has changed Gaga's mind.

She still rocks a full face of slap at every opportunity. Here she is looking uber-glamorous at the LA premiere of the film.

We say, wear what you want.

If you feel more comfortable bare-faced or made-up, just do what feels right for you. Gaga certainly does, and look where it's got her!