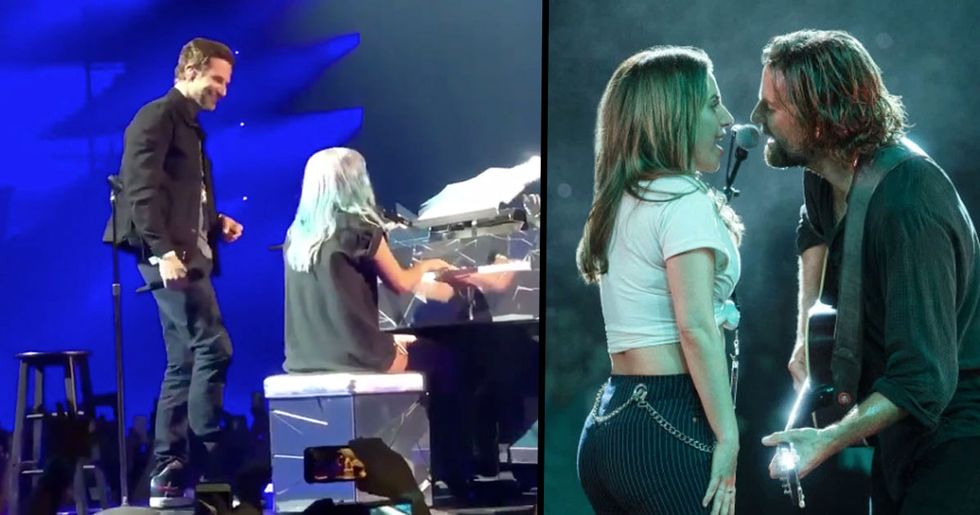 Lady Gaga’s Las Vegas residency got off to an incredible start. After watching a breathtaking show, the audience got a treat that all A Star Is Born fans have been waiting for. None other than her co-star, Bradley Cooper, joined her on stage to sing Shallow.

After watching the film we knew Bradley could sing, but to come up on stage mid-show and pull off a performance like that was a joy to behold. Even for a seasoned professional like himself.

The surprise performance has been hailed far and wide on the Internet but it’s led people to point something out about the pair and it's not going to go away quickly.

A Star Is Born is 2018 musical drama written and directed by Bradley Cooper himself.

It tells a story of a musician who helps a young singer find fame, even though his own career is about to collapse as he battles age and alcoholism.

The movie has a whopping 8.0 rating on IMDb, which we all know is an impossible rating to achieve.

Released only three months ago, it’s already off to a good start this awards season.

According to IMDb, it’s been nominated for 8 Oscars!

A Star Is Born is also Cooper’s directorial debut.

“I always knew I wanted to direct since I was a kid," Cooper says. “I was just terrified of it. As I get older, time is the bigger currency."

But turning 40 pushed him into the director’s chair. “It’s time to do it," he said.

It was his singing debut too. Who knew Bradley has such a great voice?

“It’s one thing to sing in the shower," Cooper continued.

“It’s another to sing in front of 25,000 people. Your endorphins go and you breath goes." “I was freaking out over his voice," Gaga said.

Even The Guardian says Gaga may be the revelation of the movie but Cooper is the real star.

"His performance in A Star is Born feels like a complex summation of his career progress to date: a brooding study in traditional maleness, forced into critical self-examination." "'Maybe it’s time we let the old ways die,' he keeps singing in a recurring refrain," The Guardian writes.

Cooper is clearly full of surprises. His latest surprised even him.

So @DCfilmgirl and I are in Vegas for the @ladygaga Enigma show and Bradley Cooper just jumped on stage to do “Shal… https://t.co/xQL7tzEzuj
— Kevin McCarthy (@Kevin McCarthy)1548569561.0

Harper's Bazaar says Lady Gaga's fans couldn't have expected more from her Saturday show after all the "epic costume changes" and "major stage props." But then Cooper hopped on the stage to sing the award-winning and final song of the night, "Shallow."

Twitter user KevinMcCarthyTV shared a video of their performance.

ok honestly the plot of A Star Is Born should have been Lady Gaga discovering Bradley Cooper in the audience of her… https://t.co/834Dgoat5I
— Morgan A Baila (@Morgan A Baila)1548607574.0

In the caption he said, "Bradley Cooper just jumped on stage to do 'Shallow' live!!! Insane!!!"

Then he shared a follow-up video with an update.

Here’s another part when Cooper first took the stage to sing “Shallow” with Lady Gaga at her Enigma show!!! What an… https://t.co/KgkoNmnGYL
— Kevin McCarthy (@Kevin McCarthy)1548569870.0

"Here’s another part when Cooper first took the stage to sing 'Shallow' with Lady Gaga at her Enigma show!!! What an amazing show. Cooper was sitting right behind us. We said hi a couple times. I was wearing a Jackson Maine shirt. Wow. Amazing seeing them do that live."

Lady Gaga knelt in front of Cooper when he sang the first verse of "Shallow." "And it definitely looked as though she was gazing up at him like a lovestruck puppy," Harper's Bazzar says.

Then Lady Gaga sat down at the piano.

"Cooper was completely in awe of the multi-award-winning performer" as she played.

The ending of the song was what made their performance together absolutely perfect.

Cooper sat down on the piano stool, next to Gaga, and hugged her around the waist.

Uproxx says fans have been dreaming about their joined live performance since the day the movie was released.

Their performance wasn't all that unlikely since they had considered performing "Shallow" at the Oscars 2019.

“We talked about that actually, because I’m such a maniac. I started texting her the whole pitch of how we should do it. So we’ll see. There might be a cool, unorthodox way we could perform it," Cooper said in one interview last year.

Gaga has also said that it "would be a tremendous honor to perform that song at the Oscars."

Uproxx reports that in an Instagram post after “Shallow" won the Golden Globe for Best Original Song, she wrote of Cooper, “We are all so grateful Bradley loved ‘Shallow,’ sang his heart out live, and truly the song would not be revered as it is without the brilliant film and moment Bradley created and the way he directed the moment and collaborated with us on how it would eventually be given to the world."

Indy100 says "Gaga had to coax him out of his seat for their debut live duet" and she did it in a similar way that Cooper's character Jackson did to Ally in the movie.

She said, “So a really good friend of mine… I don’t know if you know him but his name is Bradley. He made that movie, umm, A Star Is Born." “So I’m gonna be a little chance-y… Yo Bradley, you wanna come up and do this one?"

According to Variety, Cooper was in the audience enjoying the show before Gaga's call.

“I can’t hear anything," Cooper joked after they hugged, telling the crowd, “Hello, Vegas."

But Gaga was prepared and told him, “I even got you in-ears."

After the song, Lady Gaga, her dancers and Cooper took their bows. “Bradley, thank you," Gaga said, and Cooper tossed his baseball cap into the audience.

Naturally, millions of A Star Is Born fans have gone to social media to express their excitement about Lady Gaga and Cooper possibly being in love with each other.

Olashile Abayomi wrote on Twitter: "It gives me chills all the time... The song. Their chemistry. Their passion. Their professionalism They may just end up with each other.. The way they both look at each other.. Gaga is an awe of him Bradley Cooper is in awe of her."

Paulo DaGuvnor said, "It seems they both haven't dropped the movie characters. This is the real ending of the movie for me."

He’s right. It did seem like they brought their characters back to life. Don’t let Gaga’s blue hair confuse you!

Insecure Al: "I haven’t seen the movie yet- but damn these two like each other a lot."

Another Twitter user noted, "Lady Gaga and Bradley Cooper singing shallow for the first time [on] a stage since A Star Is Born came out is the sweetest thing ever."

Then they added, "Jackson Maine is alive and well, and he is singing with Ally again." Spoiler alert, I guess.

Sunny-Michel: "The way she sings with so much emotion you can feel it through your bones. This made me cry. Absolutely beautiful."

Jenny Lilliana: "I wonder if Lady Gaga and Bradley Cooper realize they're in love with each other? ??"

Mmtexas replied, "I think they realize it, but unfortunately they're both involved with other people. ??? #BadTiming"

Vicki: "They are truly in love, can't you tell. The intense romantic energy is palpable."

Jenny Lilliana: "If you don’t love me like #BradleyCooper loves #GaGa, then stay right where you’re at ✋"

Shandy: "Gaga needs to leave her slimy fiance agent for Bradley and that's that. There's also the small matter of Bradley's supermodel baby mama, so there may be a few holes in my plan."

MaryEllen: "Umm there is no way I could be in a committed relationship and watch my mate look so in love with someone else!!! Bradley is clearly in love with Gaga and who isn't ?"

CzechChick: "This angle is great. And it almost seems like Bradley is just as nervous as Ally was. So great!"

Faby Smith: "Omg. Does she wipe a tear ? from her cheek? #chills"

Barbara: "I don’t know what their respective spouses are going to do about this because this LOVE is inevitable! ❤"

This comment is probably my favorite so far. It refuses to even acknowledge any other possibility. In the end, Cooper and Gaga do love each other. But I doubt it’s anything more than platonic.