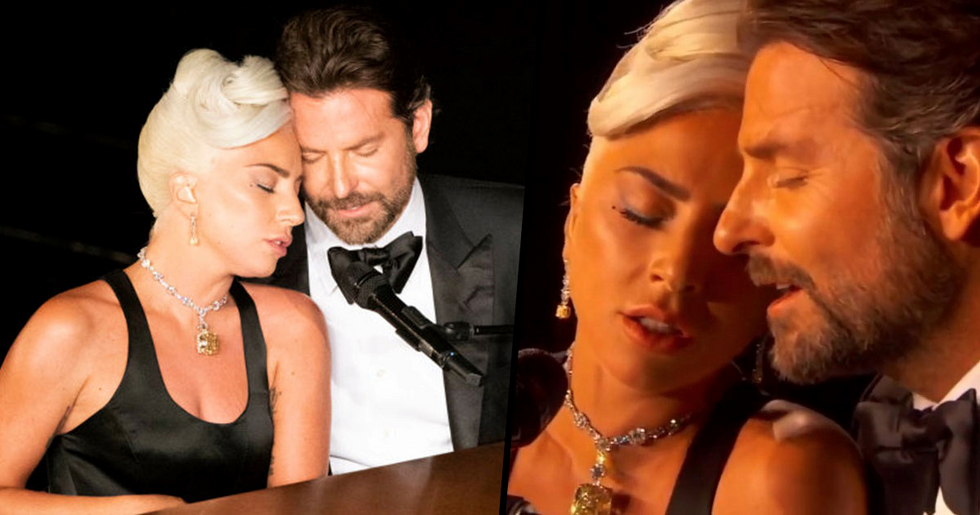 Will they? Won't they? Have they already?

It's been a rollercoaster of emotions since these two passionate performers first met and it all came to a head on the stage of the 91st Annual Academy Awards when they sang the chart topping single Shallow together from Cooper's directional debut film A Star Is Born.

The audience were left both mesmerized by the performance and intrigued about the nature of their relationship.

Surely even these two couldn't fake this level of chemistry? It was as if they only had eyes for each other and no-one else was even in the room.

And this isn't the first time that the Cooper/Gaga rumor mill has gone into overdrive.

Since Bradley Cooper and Lady Gaga performed together at the Oscars, it's all we've been able to think about.

Their duet of 'Shallow' which won Best Original Song was just so moving to watch.

The chemistry between these two is undeniable.

This performance from Bradley and Gaga was so full of heart and feelings; is it possible that this was just a performance? Are they really that good at acting?

And their body language at the awards also spoke volumes.

These two seem incredibly at ease in each other's personal space and are extremely tactile with each other. Is this just because they have worked so closely together on A Star is Born?

And even if there relationship is purely platonic, this is still an incredibly intimate position to be sitting in together so publicly.

Yes, we know it was a performance but it's not exactly the best way to stop any rumours is it?

And how does Irina feel about all this constant speculation?

Irina has since been quoted as saying that she knows that Bradley and Lady Gaga are 'artists' and that were 'simply in character' when they sang together at the awards.

And they did seem to be all sweetness and light sitting together at the event.

We can't help but think that even if Irina 100% trusts her man, she must be getting fed up with all the constant speculation around their relationship.

But she had already unfollowed Gaga prior to the event.

We suppose if you did suspect that something untoward was going on, you wouldn't want to be constantly bombarded with updates of the alleged other woman all the time.

The actor posted this tweet, sharing his disbelief (and that's putting it mildly) that the two of them are just friends.

Even better was the reaction to this tweet from Bradley Copper's ex-wife.

Jennifer Esposito was briefly married to Bradley for four months back in 2006, a million moons ago in showbiz circles but she still felt the need to comment on this loaded tweet. It's crazy how a two letter word can say so much. "Ha!" What was she implying?

And so many people agreed with him.

I’m obsessed with Lady Gaga and Bradley Cooper. The chemistry between them is incredible. They sang Shallow at the… https://t.co/RkTPn3BHrE
— pami kaur (@pami kaur)1551297900.0

Many are even rooting for them to get together. Be the real deal so to speak. But are they forgetting his supermodel girlfriend Irina and the daughter they share together?

Because some believe that these two are very clearly in love.

He even lifted her veil, albeit a black one.

It's as if they are deliberately trying to mess with our heads. Of course, now we're imaging the two of them walking down the aisle.

But a few are unconvinced.

Why would Bradley Cooper cheat on one of the most beautiful and stunning woman ever, Irina Shayk, with er Lady Gaga? It's impossible.
— Kam (@Kam)1551275095.0

But to quote Jude Law in Alfie; "For every beautiful woman, there is a man who is fed up of sleeping with her." Unfortunately, this is all too true.

Lady Gaga attempted to quash rumors once and for all when she posted this caption.

Referring to Bradley as a true friend and artistic genius was obviously her way of trying to end the speculation about their relationship.

Just to let you know Gaga, this is what a platonic friendship looks like.

Not the electric, sparks flying, chemistry exploding connection that you and Bradley show to the world.

And apparently they just wanted us all to think they were in love.

Lady Gaga says she and Bradley Cooper wanted people to think they were in love during their Oscars performance https://t.co/QjcMQ55bdV
— Rob McKelvey ® (@Rob McKelvey ®)1551358900.0

Ahh they were just character acting! That's that cleared up then. Do they really think we are that stupid?

The lady doth protest too much, me thinks.

My face when #JoyBehar said Lady Gaga and Bradley Cooper are "just acting, like Bogey and Bacall" on #TheView https://t.co/hDJhsCNRvI
— MegasaurusRex (@MegasaurusRex)1551277709.0

And the man too in this case.

We remember right back when the rumours first started.

Bradley and Lady Gaga were spotted casually getting groceries together in Los Angeles on his motorcycle. This was way back in 2016.

Or maybe that's just us reading too much into it. It's just the sight of this handsome pair all leathered up that is getting us flustered.

These photos were taken just months after Bradley and Gaga met for the first time.

Bradley was attending a charity benefit in Los Angeles with his mother where Gaga was performing. After hearing her sing La Vie en Rose, he was so inspired and blown away that the very next day he requested to meet up with her.

And the next thing we knew he was at her Malibu home eating spaghetti and meatballs.

Gaga has been quoted as saying; "From the moment he came to my home and I opened the door and we locked eyes, I felt an instant connection with him."

At the very same meeting they recorded themselves singing a duet of Midnight Special.

Apparently they were both taken aback and how good they sounded together and there and then Bradley decided that Gaga would make the perfect Ally.

And the rest as they say is history.

They began filming and hanging out together. Gaga was quoted many times saying; "For someone who doesn't feel safe all the time, he made me feel so free. There could be 100 people in the room and 99 don't believe in you, just one- and it was him."

They looked closer than ever at the premiere of A Star Is Born.

Bradley spoke of their deep connection saying; "It's everything. We're both really going on a limb, and I'm asking her to hold my hand and jump off a cliff everyday. I have a friend for life." Emphasis very much on the word friend.

They then both attended the SAG Awards in January 2019.

But they both brought their own dates. Cooper came with his mother Gloria Campano and Gaga with her fiancé (at the time) Christian Carino.

Maybe we should have guessed at the time that this relationship was on the way out.

Gaga's body language in this picture says it all, these two were clearly heading for splitsville and it finally happened last week when a rep for Gaga confirmed that they had gone their separate ways.

Irina was noticeably absent from the awards and of course speculation as to why she wasn't there was rife.

But she was in fact in Moscow shooting a campaign with Marc Jacobs and Sephora.

And then there was their impromptu performance in Las Vegas last month.

Gaga was performing in her residency show Enigma when Bradley jumped on stage to perform Shallow with her. Again their chemistry was electric. Gaga was literally on her knees.

And that brings us back to the present day and their recent performance at the Oscars.

Still not really 100% sure either way on the real nature of their relationship.

It's almost felt like a real life Ross and Rachel saga.

It's definitely been a rollercoaster of emotions. Are they? Aren't they? Sometimes we've just been willing them to get the hell on with it so we can all move on with our lives.