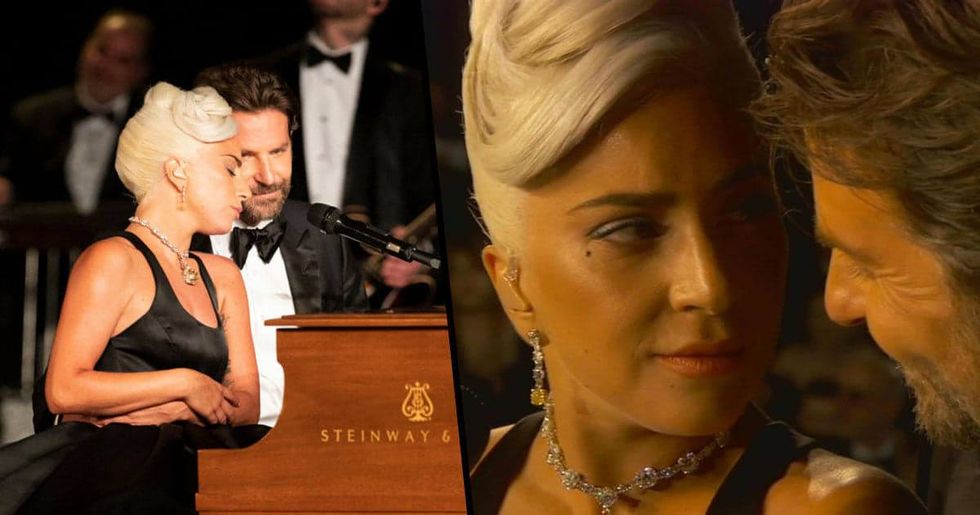 Every year the Oscars seems to leave the internet buzzing. And this year is no different.

But after Sunday’s ceremony, as well as the usual chat about who won what, who said what, and who wore what, there is something else people can’t shut up about.

Bradley Cooper and Lady Gaga gave a steamy musical performance on stage at the Oscar Awards this year. While Cooper’s girlfriend, Irina Shayk, watched in the front row.

It has already sparked a lot of internet discussion. And some hilarious memes to boot.

Poor Irina. We hope Cooper and Gaga’s duet didn’t leave her feeling like a too much of a third wheel.

Sunday nights spectacular award ceremony was quite a rollercoaster.

The yearly film awards, the Oscars, took place on Sunday in Dolby Theatre in the heart of Hollywood, LA. Tina Fey, Maya Rudolph, and Amy Poehler introduced the show after the Oscars failed to find a main host this year. There was lots to report on including some unpredicted wins.

Olivia Colman, bagged the Oscar for best actress for her performance in The Favourite.

British star Olivia Colman won the Oscar for best actress which took some people, including herself, by surprise. “This is hilarious. I’ve got an Oscar" she said on stage, in shock, as she accepted the prestigious award.

There was some controversy over best picture going to Green Book.

Green Book controversially won the best picture award. It was criticised for its inherent racism. The story of a black man that turns into a tale about his white driver. Many expressed disappointment at Peter Farrelly’s Green Book winning over Cuarón’s more hard hitting Roma, and Spike Lee’s Blackkklansman, a true story adaptation of a black policeman infiltrating the KKK.

It was Bohemian Rhapsody, the musical epic telling the story of rock band Queen, that finished up with a total of four awards, more than any other movie. Prizes for the picture included best actor which went to Rami Malek for his powerful performance as the late Freddie Mercury.

But what really stole the show was actually something else entirely.

So, although we have all been enjoying releasing our inner film-critic during the usual post Oscars run-down, we can’t quite let go of our inner gossip. And there was a moment during the Oscars ceremony that caught more than one person’s eye.

It was the musical duet performed by Bradley Cooper and Lady Gaga.

Cooper, star of American Sniper and The Hangover, and Lady Gaga, famous for her pop hits Bad Romance and Pokerface, performed a song on stage at the Oscars as part of the evening’s entertainment. It was such an emotive performance that people are heralding it as the highlight of the whole ceremony.

It completely brought the house down.

It wasn’t just the sweet melody that has caught people’s attention. It was the way the pair interacted on stage. No-one failed to notice the intensity with which they looked and sang to each other as if no one else was in the room.

No one can stop talking about their chemistry.

And watching the performance, darn, their chemistry really is undeniable. They walked on to stage holding hands and got up close and personal on the piano bench singing to each other. I mean it kind of feels like those two should get a room. It has definitely left everyone a little hot under the collar.

Which shouldn’t really be a problem.

In a way this should be the sweetest story ever. Who doesn’t love uncovering a good old celebrity romance? But we are missing one important piece of information.

Except that Cooper’s girlfriend, Irina Shayk, was sitting right there in the audience.

Wait what? That’s right, I think we all forgot for a second that Cooper is already spoken for. And his girlfriend was sitting there watching the whole thing. That sounds a little uncomfortable. Some people are saying Irina looked a lot like a third wheel.

This awkward moment has now been turned into some hilarious memes.

Something positive we can draw from this, is that at least all the memes it has created have kept us entertained.

There has been a stream of memes about the duet. As well as Shayk's reaction.

People won’t stop talking about it.

Raise your hand if you thought Lady Gaga and Bradley Cooper were about to make out. #Oscars⁠ ⁠ https://t.co/PcJ41DpuPm
— Vicky Mahoney (@Vicky Mahoney)1551063917.0

People are getting creative. And we like nothing better than a good Mean Girls meme.

And the memes just get sillier.

I mean. Where do we even start?

One Twitter user claims just looking at the two of them got her pregnant. I mean talk about chemistry.

And I know we shouldn’t… but you gotta laugh.

You just can't help but laugh at the stream of post-oscars memes. Most of which have been about the duet.

Although it seems Shayk handled the situation with class.

If she was uncomfortable, she certainly didn’t show it. She was one of the first people to stand up and give a round of applause in support of Cooper and Gaga. Well done on keeping that poker face Irina.

Her and Gaga even hugged.

The three sat together during the awards and the two women exchanged a hug. So perhaps Cooper and Gaga’s on-screen chemistry is all for show. They are actors after all. Although they certainly had me convinced!

Cooper and his girlfriend were also said to have shown lots of PDA at the awards.

Another sign that the rumours aren’t true perhaps? Cooper and Shayk walked down the red carpet holding hands and were seen kissing in the venue.

Cooper has kept his relationship with Shayk relatively under wraps.

Cooper and model, Shayk have both expressed they prefer to be private about their relationship. The couple was first rumoured to be dating in 2015 and Shayk gave birth to their first child Lea de Seine Shayk Cooper in 2017. As they both have jobs in the public eye, they enjoy keeping their private life to themselves.

Gaga and Cooper performed “Shallow" from A Star is Born, in which they were co-stars.

The song that has everyone up in arms was taken from the 2018 movie A Star is Born in which the two were co-stars. Cooper also directed the film.

In the movie Cooper plays a rough, older singer struggling with alcoholism.

In the movie, Cooper’s character helps Gaga’s character, a younger singer, find fame. And like any good Hollywood tale, the pair inevitably fall in love. After last night’s performance, we are all wondering if some of that on-screen romance has continued off the set.

The 2018 musical movie is actually the third remake of the original 1937 film.

Although the Gaga and Cooper version only came out last year, the story of A Star is Born is older than you might think. The original version came out in 1937, based on an a screenplay and story written by William A. Wellman and Robert Carson.

There was also a 1954 version of the musical.

Judy Garland and James Mason starred in the second adaptation of A Star Is Born that came out in 1954. Garland was nominated for Academy Award for best actress for her performance.

In 1976 there was yet another version of the movie with Barbara Streisand. The film grossed $80 million dollars at the US box office and had a hugely popular soundtrack. There was discussion of Elvis taking the lead male role, but eventually the part went to Kris Kristoferson.

But the duet wasn’t lady Gaga’s only emotional moment this Oscars.

Lady Gaga went on to win best original song for the very same song she and Cooper performed on stage. The song is the first single from the film’s soundtrack and was written by her and Mark Ronson.

She teared up after winning an Oscar for Best Original Song.

She gave an emotional speech, thanking her family, her sister (soulmate), and the Academy. She then gave a special mention to co-star Bradley Cooper. "Bradley, there is not a single person on the planet that could have sung this song with me but you. Thank you for believing in us."

Cooper, on the other hand, missed out on Best Actor and was snubbed in the category of Best Director.

He lost out on best actor to Rami Malek in Bohemian Rhapsody. And he didn’t even get nominated for his direction of A Star Is Born. And now could there be a spanner in the works in the relationship as well?

Basically, I’m pretty sure I think we all feel like this.

This Twitter user sums up perfectly how we basically have no idea what is going on!
20%