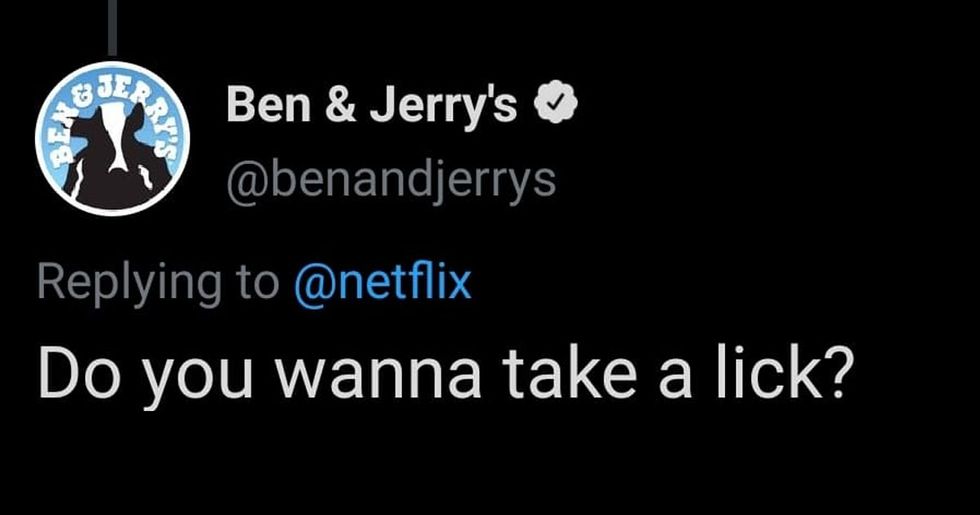 It's almost the end of the year, and it seems some brands are feeling a little bit delirious. This weekend, the world of branded social media has gone absolutely wild - and with totally hilarious results.

The "name something you can say during sex" meme has been cracking us up for the past couple of weeks, but when the Netflix Twitter account decided to get in on the action, things really took a turn. They asked brands to name something "you can say during sex but also when you manage a brand twitter account." And the responses, from accounts ranging from Ben & Jerry's to Pepsi, certainly didn't disappoint.

Here's our countdown of the best.

Every so often, a meme comes along which really captures the internet's attention.

The way a simple joke can unite us all can really warm our hearts in times of need.

But the latest meme to take the internet by storm?

Well, it's a little bit on the cheeky side - and it's causing some surprisingly awkward laughs.

The "name something you can say during sex" meme is pretty hilarious.

Not least because it can be applied across so many different situations.

This one is a little bit depressing, we're not gonna lie.

To during Star Wars...

To a fantastic Game of Thrones reference...

This one still cuts a little deep.

It quickly became a legend amongst memes.

When a meme can incorporate another meme, you know you're on to a winner.

What made the meme so great?

It could be tailored to each of our universal life experiences.

It can be taken to more eccentric, surreal places - like America's proud history.

And the meme is eminently applicable.

Whenever a new sensation takes the internet by storm, this meme is right there behind it.

It's safe to say whoever is running the Netflix socials has gone a little bit wild.

And it seems other brand socials have followed suit.

With some surprisingly saucy results. Is everyone feeling ok?

The answers to Netflix's request for "something you can say during sex but also when you manage a brand twitter account" are absolutely ingenious. Here are some of the best.

This one had our jaw's dropped.

This one is perhaps the most X-rated of all!

This is actually some surprisingly salient advice.

Sometimes you just want to know!

We never thought we'd see two brands tweeting about group ... romantic encounters - but here we are!

This one left us a little bit speechless.

Actually, this is pretty useful. For tea, we mean.

A little bit obvious, but still made us laugh.

...Not exactly sure what this one means?

Our eyes! Our eyes!

Who knew they made such caring lovers?

For those who prefer a "Natural" beauty.

We're sure they're being a little hard on themselves here.

They've always got our best interests at heart.

Hey, don't talk yourselves down guys!

Can we say yikes?

If you've ever tried their Super Shock Shadows, you know they're not wrong.

We totally respect their decision.

But hey, it's nice to see some brands having fun ... right? Fancy a trip down meme memory lane? Scroll on to see what the real-life people behind your favorite memes look like today. Some are pretty shocking!