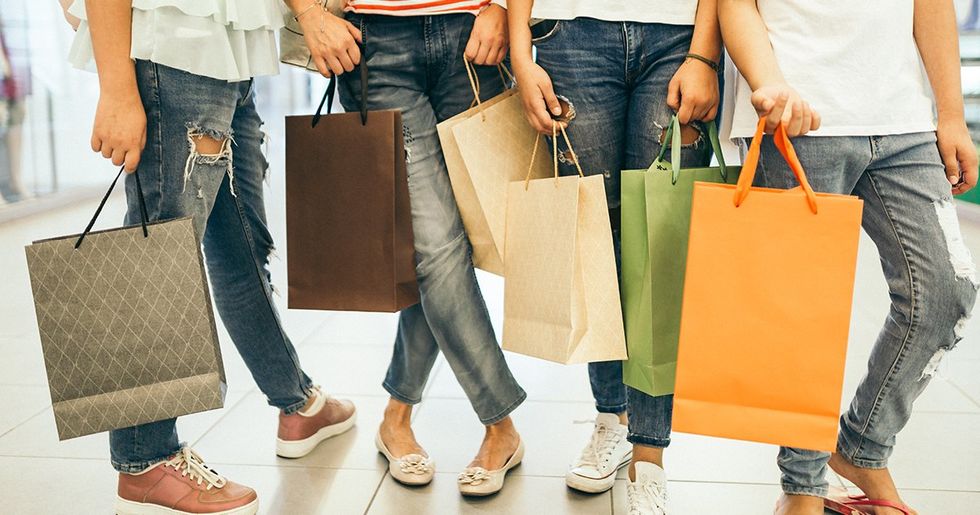 Have you ever heard of vanity sizing? It's the practice of companies marking larger sized clothing at smaller sizes, and it's happening basically everywhere you shop.

Brands do this to make their customers feel small. But vanity sizing causes a whole different kind of frustration.

In the US, measurements for numbered clothing sizes aren't standard, which means brands can say a size six is whatever they feel like a measurement size six should be. Because of this, it's impossible to know what size you actually are. You might be a six at American Eagle, but a ten at Free People.

Social shopping network Fitbay, actually went ahead and asked women whether they had to size up or down from their normal size for 18 popular brands.

American Apparel was the teeniest of the brands.

Clothes from American Apparel tend to run small. So if you feel discouraged that you usually fit into a size medium but find yourself reaching for a large pair of velvet leggings, don't despair.

Modcloth is known for their inclusive sizing: they pride themselves on carrying extra several small sizes to several extra large sizes. But do they really? They actually run pretty small, so even though they carry larger numbers, it still might be harder to fit into them.

Zara was next, still on the small side.

As an international brand, it may be a little harder for them to stay constant with US sizing, but they still tend to run small.

Forever 21 is on the smaller side as well.

Forever 21? More like, will I get trapped in this tiny dress by myself in this badly lit dressing room forever? If you always feel like you are trying to wiggle your way out of a romper you thought was your size at Forever 21, you're not alone. Forever 21 ranked fourth smallest sizing. Which brands are actually sized correctly? Keep reading to find out!

Nike is the next brand that runs small.

More women than not reported that Nike sizes were smaller than they expected.

In the middle: Uniqlo.

The Japanese company has their sizes almost right, but they run small.

American Eagle was ranked next.

Almost exactly in the middle, American Eagle seems to stay true to the sizes women expect.

H&M gets even closer.

Next on the list, the European giant doesn't have the same problem as Zara. Their sizes seem to be about what women think are standard.

They are sitting pretty close to the middle. Which companies mark their larger sizes with smaller numbers? Read on to find out.

Old Navy is squarely in the middle.

Old Navy is right in the middle when it comes to sizing. This makes sense for a clothing brand that just kinds of feels like it belongs in the middle: not great, not bad. Occasionally, you remember it exists, and you're like "Oh right, Old Navy."

Here's another one that's right in the middle. Although, as with any online-only clothing brands, it's always kind of a mystery what exactly is going to arrive from Asos. A sweater you thought was brown but turned out to be mustard is par for the course, but at least their sizing is consistent.

Express is next and they are nudging their way into vanity sizing territory.

Express is on the farther end of the scale, which means it has larger measurements for smaller sizes.

Next up is Anthropologie.

If you can afford to buy anything at this dreamy beach shack for colorful fairies that sells clothes, be warned that you will need to size down in order to get the right fit.

Banana Republic is next, also guilty of vanity sizing.

If you think you've lost weight when you try on a Banana Republic blazer, sadly, you are just experiencing vanity sizing. But we think you look great! The last of the ratings are on the next page! Keep reading to find out who is the biggest offender of vanity sizing.

Gap is the next offender.

Fall into the Gap and also maybe fall all the way through a size medium t-shirt that is much larger than you would expect.

J. Crew is even worse.

Free People is one of the worst offenders.

Although it's probably hard to tell since almost every piece of clothing at Free People is just a giant piece of baggy fabric. A beautiful baggy piece of giant fabric, but still.

And the company that runs the largest: Loft.

Definitely size down at Loft, which runs the largest of any other clothing store reported.

Are you surprised with the results of this survey?

I, for one, am glad I'm not the only one who finds American Apparel clothes almost impossible to squeeze into. It's nice to have some validation that's it's not just me, those tube tops are as teeny as they look. Share this post with your friends and see if you agree with these rankings!