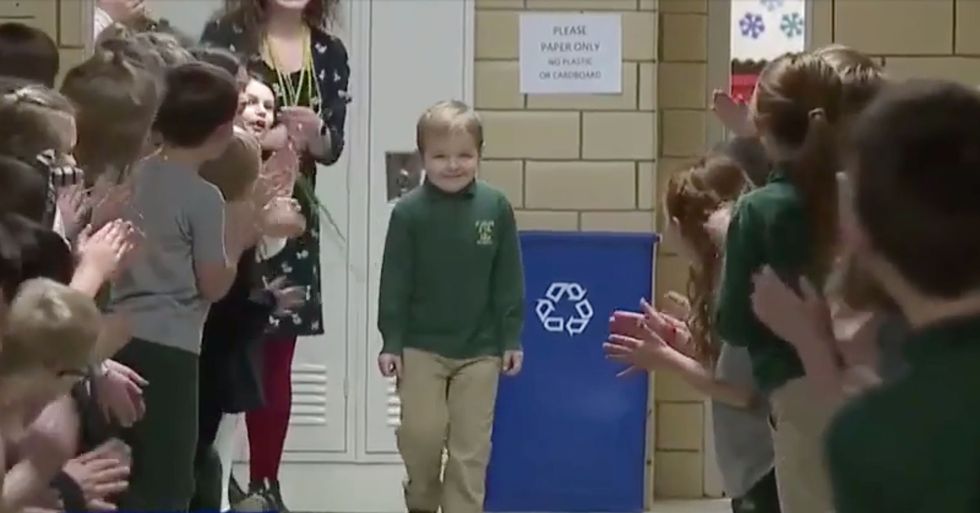 Cancer is a devastating and cruel disease that claims the lives of hundreds of thousands of Americans every year. And, despite the millions of dollars that we have thrown into finding a cure for the deadly disease, we're still no closer ending cancer than we were all those years ago.

Because of this, the United States has the fifth-highest cancer rate in the world.

So, in the current climate, it's nice to hear the success stories of people beating the disease.

One little boy has gone viral for that exact reason - keep scrolling to see the heartwarming video.

The disease is having devastating consequences on families all over the country...

And John Oliver Zippay is one of those stories.

The boy from Ohio, known as J.O. was diagnosed with leukemia in 2016 - when he was just 3 years old.

What exactly is leukemia?

Leukemia is a cancer of the blood and stem cells, and primarily affects children. The American Cancer Society estimates that there will be around 60,300 new cases of leukemia in the United States in 2018, resulting in a devastating 24,370 deaths.

And J.O. was determined to be one of the survivors.

The leukemia was caught early so, despite the devastating diagnosis, his chances were looking good.

But it was his classmates' reactions that makes this story so heartwarming...

J.O. had been battling leukemia for 3 years.

And has had so much support from friends and family.

J.O. received his last round of chemotherapy 2 days after Christmas.

He always tried his best.

Despite his awful diagnosis, J.O. never fell behind on his schoolwork.

He had to deal with a lot.

"He had a meta-port in his chest so he wasn't able to do any physical activity for three years. So it was hard for him, had to sit back for gym class and things." Said his dad, John Zippay.

Here's to the future.

The family is now looking forward to the future, with J.O. being able to live a more normal life and enjoy the things he wasn't able to before.

Mum, Megan Zippay wrote: "It is one filled with great heartache and emotions, but also love, courage, and hope. Please, in honor of J.O. continue to pray for and support those still fighting the battle of cancer, and especially pray for those who have lost a loved one."
"As we celebrate J.O.'s last chemo treatment we are filled with much joy, but we recognize we are not out of the woods yet and will continue to pray for him."

"As we move forward in life, and start a new chapter, we recognize how fortunate we are, how fragile life is, and that we must cherish every moment together as people."

His family was visibly overjoyed...

Megan's Facebook page reads: "This journey has opened our eyes to the amazing goodness in people, and the immense love and compassion that can be shared amongst us. There is absolutely no way we could have done this alone."

Since been given the all-clear, J.O. has been going from strength to strength...

And has been living and loving life, even going back to school after the good news. Keep scrolling to see the heartwarming video of J.O.

Megan says: "So many have stood by our sides in so many ways. We have literally thousands of people to thank. I can't list them all here, but you know who you are, and we are forever grateful for you. 'It takes a village' could not be any more true here!"

The principle was happy to have him back.

He said, "Him having to miss some of the time was tough, but the class was just so happy to see him come back."

He has now returned to school.

J.O. has gone back to school and is doing well. Check out the video below of the welcome he got when he returned to St Helen Catholic School in Newbury.

You can watch the celebratory video here.

What an inspiration he is to us all, to keep on going no matter what life throws at you.