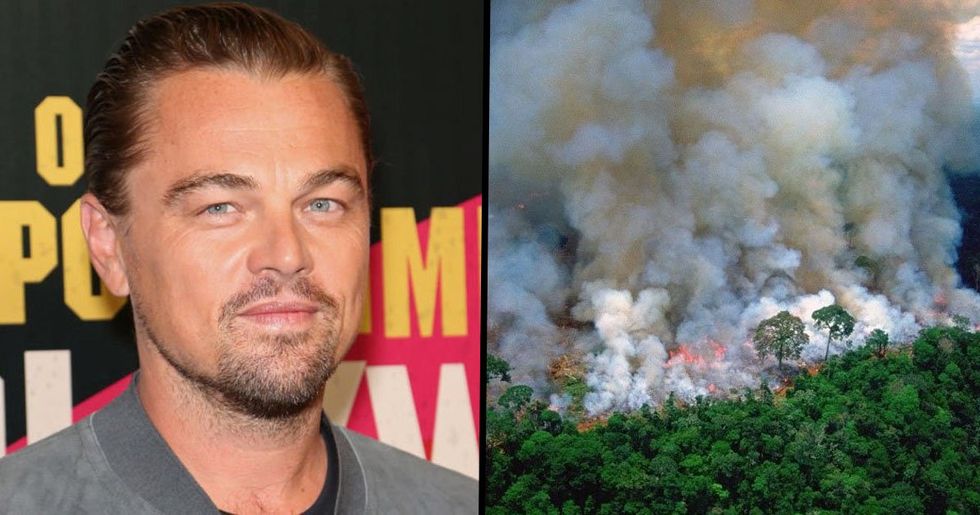 For months, one of the biggest natural resources that our dying planet has left was slowly being decimated by flames. The Amazon Rainforest, located primarily in Brazil in South America, is one of the largest areas of biodiversity. Not only that, but the sheer amount of plant life there has led to it gaining the nickname "the lungs of the world."

But recently, this stunning (and essential) part of the world was under siege by a truly enormous and destructive forest fire. Horrifying photos show the extent of the disaster. And some suspect that this tragedy is far from accidental.

Some celebrities, such as Leonardo DiCaprio posted online about the fires to raise awareness. DiCaprio also donated $5 Million to tackle the fires.

However now, Brazil's president, Jair Bolsonaro has accused DiCaprio of being behind the fires! Keep scrolling to find out more.

Since January this year, the Amazon has been consistently on fire. During August things got even worse when the Amazon Rainforest was rampaged by an enormous and terrifying forest fire.

For some reason, this fire didn't attract many headlines at first.

So people on the internet took matters into their own hands.

Then the news started to gain traction.

Many are concerned about one man in particular.

Since he came to power, the extremely right-wing President of Brazil, Jair Bolsonaro, has voiced some pretty worrying opinions about the environment.

And some of his campaign promises revolved around making Brazil more economically powerful. The problem is that he appears not to care about the other costs of making money.

Which means that he's more than happy to destroy the Amazon for money.

Many cattle ranchers are keen to purchase large areas of rainforest land in order to raise cows for meat. The problem is, once the rainforest is gone, it will never grow back.

But that doesn't seem to matter to Bolsonaro.

And many are suspicious that, rather than any sort of accidental forest fire, the blazes raging in the Amazon right now are a deliberate act of deforestation for profit.

Which is a pretty frightening thought.

The idea that someone would prioritize money over life on Earth seems hard to comprehend. But it also means action by the rest of the world is all the more urgent.

Others suspect that things run even deeper.

Some conspiracy theorist view these fires as, not just a move for profit, but a deliberate attack on indigenous people.

And some want institutional action to be taken.

The deliberate fires in the Amazon should be treated as war crimes against humanity and prosecuted in the Hague
— Sue Hubbard (@Sue Hubbard)1566558306.0

If these fires are deliberate, then someone (or a group of people) are responsible. It's reprehensible that there's not been any sort of investigation thus far.

Because, more than just affecting innocent animals and indigenous people...

The destruction of the Amazon is something that will have an adverse effect globally. Some have even proposed it to be something of an early indicator of the apocalypse. Cheery stuff, we know.

And one indigenous woman has spoken out.

In a video posted to Twitter, she proclaims: "For 2 years we’ve fought to preserve [our reservation] and these assholes came in and burned it down. They are killing our rivers, our sources of life, and now they have set our reserve on fire. Tomorrow we are closing the roads and I want all the media here to see this."

So, is there any hope to be gleaned from this story?

Well, if anything, it's the way that the world is slowly coming together in order to put an end to this horror.

The star-studded actor has pledged to donate 5 million dollars to aid the efforts to put out the horrific fires.

He made the announcement through "Earth Alliance."

Dicaprio used this environmental foundation to raise awareness about the issue. He, along with two other philanthropists, set up "The Amazon Forest Fund" so that people could also donate to the cause.

This isn't the first time that he has done his bit for the environment...

It seems as though Dicaprio has become a prominent figure in the fight against climate change. Last year alone, his other charity organization, known as "The Leonardo DiCaprio Foundation," raised over 100 million dollars for the cause.

Leo made sure that all of his followers knew how important this fight is.

He wrote on the foundation's website: "When I founded LDF twenty years ago, I did so based on the simple idea that we could make a real difference by directly funding some of the most effective environmental projects."

Well none other than our good friend Jair Bolsonaro has accused DiCaprio of being behind the fires.

According to The Guardian, Bolsonaro made the unsubstantiated claim against DiCaprio in a Facebook live video. He reportedly said:

Leonardo DiCaprio, dammit, you’re collaborating with the burning of the Amazon.

Then boom, 24 hours later, he made a second comment.

Speaking on Friday, Bolsonaro made the comment about DiCaprio, saying:

This Leonardo DiCaprio is a cool guy, isn’t he? Giving money for the Amazon to be torched.

And then Bolsonaro's son got involved tweeting that DiCaprio had donated $300,000 to ‘the NGO that set fire to the Amazon’.

He made the comments after firefighters were arrested.

Bolsonaro made the allegations after the arrest on Tuesday of four volunteer firefighters who local police accused – again without evidence – of setting fire to the forest to boost fundraising efforts for an international NGO.

DiCaprio has since responded pledging his continued support to the Amazon and the indigenous people.