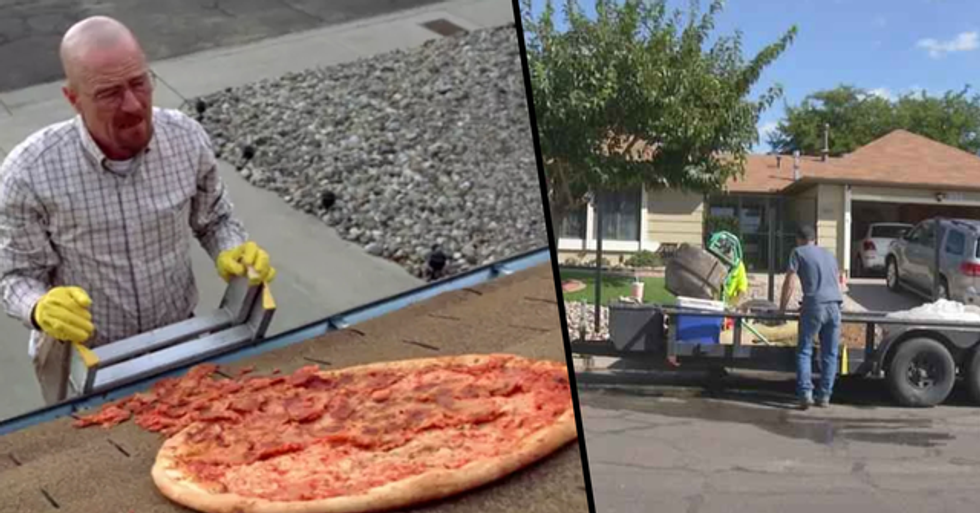 Much to the delight of Breaking Bad fans all over the world, it was announced last month that a Breaking Bad movie has indeed been filmed and completed, and will be on our Netflix screens on October 11th.

While most of us are preparing for the release of El Camino by binge-watching the original series as a recap, there are some who are taking their passion to the next level.

Remember the scene when Walt angrily hurls a whole pizza onto the roof of his house following an argument with a rather salty Skyler? Well, people seem adamant about recreating it in the wake of the movie announcement and have been showing up at the actual Breaking Bad house in New Mexico, armed with whole pizzas ready to fling at the roof.

Keep scrolling to read the full story, and to hear what the show's creator, Vince Gilligan, has had to say about the trend...

Breaking Bad is perhaps the greatest piece of television ever made.

A bold claim, I know. But no other show has ever had me as hooked as Breaking Bad has. Though the initial “drug cartel" themed synopsis put me off, once I forced myself to watch it, there was no going back.

Initially gracing our screens back in 2008, the show ran for an entire 5 seasons and had the world obsessed all the way until its finale in 2013. Let’s quickly recap what happened throughout the show… If that’s even possible.

Conscious of the looming medical costs, and not wanting to leave his pregnant wife and disabled son bankrupt, Walt teamed up with his former student, Jesse Pinkman, and used his chemistry skills to start “cooking" crystalized Methamphetamine.

The initial goal of making money to fund his medical treatments was soon forgotten. The success of their signature drug catapulted Walt and Jesse to high levels of success amongst other drug cartels, and we watched (in both horror and awe), as Walt transformed from a timid high-school teacher to the hardened, and incredibly dangerous, drug lord, Heisenberg.

The finale of the show left us crying for more.

Literally. Or am I the only one who cried? The final few episodes were dramatic, to say the least. But it wouldn’t be Breaking Bad without one final bit of showmanship, would it? Hank and his partner were shot dead in front of Walt and, knowing that his days were numbered, Walt took out all of his remaining enemies in one go with a triggered machine gun. Nice. The final episode ended with Walt collapsing to the floor of the lab after been shot by police.

Jesse, after months of being abused and forced to “cook" by Walt and other drug gangs, is finally free and drives away from the lab, laughing and crying hysterically. And Walter? After collapsing, he is subsequently surrounded by armed police officers. He was finally caught. But did he die? Or did he get arrested and spend the rest of his days behind bars? Annoyingly, the scene cut before we could find out.

So, obviously, fans were delighted to hear the news of the Breaking Bad movie.

Oh, didn't I mention? The Breaking Bad movie, El Camino, is officially happening and will be released onto Netflix on October 11th.

Fans have been eagerly rewatching the series and recapping on their favorite scenes and moments from the show.

And there's one scene that is more popular than most...

We all remember the "pizza-on-roof" fiasco... Perhaps the most memorable moment of the entire series, Walt throws a full pizza onto the roof of his house.

The scene was a funny blip in the otherwise dark and turbulent series...

In the second episode of the third season, "Caballo Sin Nombre," Walter brought a giant pepperoni pizza to his home in an attempt to make amends with Skyler. But, because she'd just found out her husband had secretly been involved with a drug cartel, she slams the door in his face, prompting Walt to hurl the pizza in the air out of frustration.

Remarkably, the actual pizza flies out of the box...

And lands neatly on the roof. Somehow, though, and without him even knowing it at the time, Bryan Cranston managed to nail the throw on the very first take. And there it sat, as an iconic reminder of that failing marriage for several episodes before it was finally taken down.

It became one of the most loved moments in the show.

Especially when we watched as Walt sheepishly return days later with his tail tucked between his legs, painstakingly scraping the congealed pizza off of the roof.

The Albuquerque property has become one of the most well-recognized houses on television...

The house posed as the exterior of the White household for the entire duration of the series and has thus become a popular tourist hotspot.

However, some tourists have been taking it too far...

By following in Walter White's footsteps and flinging full pizzas onto the roof, prompting the house's actual inhabitants to build a fence around the property.

After years of taking vandalism, trespassing, and general rudeness from tourists, the real-life homeowners have had enough.

The owner's daughter, Joanna Quinta, told KOB4, "We feel like we can't leave because when we do, something happens and that's ridiculous."
She adds that even the tourists who don't throw pizzas can still be irritating, "They feel the need to tell us to close our garage, get out of the picture, you know - tell us what to do on our own property." For years, the homeowners have put up with trespassers and even thieves who all want to get a closer glimpse at the famous house.

They have reluctantly decided to put up a 6-foot fence to keep people out.

That fence should be completed soon, but Quintana said people have already tried to climb around the construction to get a picture. "We don't want to gate ourselves in," Quintana said. "We're the ones who are being locked up. We did nothing wrong."

Speaking on the Better Call Saul Insider Podcast, the writer and director said: "The lady who lives in that house - she and her husband are the 2 nicest people in the world, and they deserve to be treated well."

And he has urged people to be respectful of the property...

And to not throw pizza on the roof. "But lately, we're hearing from her that folks are wandering onto her property and they are being rude to her when she comes out and basically says, 'You're on my property', and they're throwing pizzas on roofs and stuff like that." "There is nothing original, or funny, or cool about throwing a pizza on this lady's roof. It's been done before - you're not the first."

Gilligan has had enough of those fans.

"We love our fans. I don't love those fans. I don't consider them fans," said Gilligan. Ouch. Anyway, for those of you who aren't out terrorizing the poor homeowners with flying pizzas, keep scrolling to hear the details surrounding the new Breaking Bad movie...