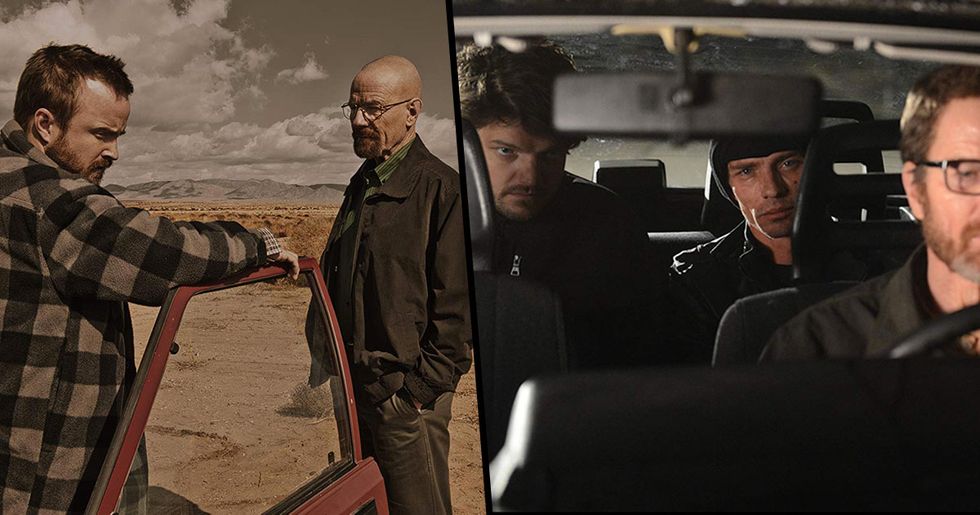 You may or may not have heard, but a Breaking Bad movie is coming to Netflix next month.

It's been an awfully quiet 6 years since the ending of Breaking Bad, and the thing that we've been eagerly anticipating since the finale in 2013 is a Breaking Bad movie. Or another season. Or anything that will finally reveal Walt and Jesse's fates after that ridiculously intense ending in season 5. Where did Jesse drive away to? Did Walt actually die? There are endless unanswered questions for Breaking Bad fans far and wide, and now, they are finally going to be answered.

El Camino, which will be gracing our screens on October 11th, was impressively crafted in secret, with none of us having so much of an inkling that a movie was even in the works.

Despite Aaron Paul's excitement over the project on his social media, details around who will feature in the movie have been kept tightly under wraps. But now, Vince Gilligan has discussed the movie and has revealed that a number of familiar faces will be making an appearance...

Breaking Bad is perhaps the greatest piece of television ever made.

A bold claim, I know. But no other show has ever had me as hooked as Breaking Bad has. Though the initial "drug cartel" themed synopsis put me off but, once I forced myself to watch it, there was no going back.

Cranston and Paul made the perfect duo.

The leading stars of the show pulled off spectacular performances, with both actors winning an array of awards, such as Emmys and Golden Globes. Oh, and they've become the cutest bromance offset too.

Initially gracing our screens back in 2008, the show ran for an entire 5 seasons and had the world obsessed all the way until its finale in 2013. Let's quickly recap what happened throughout the show... If that's even possible.

Conscious of the looming medical costs, and not wanting to leave his pregnant wife and disabled son bankrupt, Walt teamed up with his former student, Jesse Pinkman, and used his chemistry skills to start "cooking" crystalized Methamphetamine.

The initial goal of making money to fund his medical treatments was soon forgotten. The success of their signature drug catapulted Walt and Jesse to high levels of success amongst other drug cartels, and we watched (in both horror and awe), as Walt transformed from a timid high-school teacher to the hardened, and incredibly dangerous, drug lord, Heisenberg.

They got involved with some dangerous people...

Throughout the show, we watched as Walt and Jesse get mixed up with some precarious crowds. Ranging from the lunatic dealer, Tuco, to deadly businessman, Gustavo Fring, the pair continuously found themselves in dangerous waters throughout the show.

Getting away from the DEA was one of the recurring themes throughout the show.

And we will never forget the moment when Walt's DEA agent brother-in-law, Hank, finally realized that Heisenberg was his own brother. Halfway through season 5, when the water had seemingly settled in Walt's life, Hank stumbled across a book gifted to Walt by former cooking partner, Gale Boetticher. Gale was a known cook to the DEA, and Hank had personally investigated his untimely murder. So it was obviously a ground-breaking moment for fans when Hank put 2 and 2 together and realized that he'd be chasing his own brother-in-law this entire time. And, due to the several injuries and near-death experiences that he had faced in his hunt for Heisenberg, Hank was understandably pissed.

And the finale of the show left us crying for more.

Literally. Or am I the only one who cried? The final few episodes were dramatic, to say the least. But it wouldn't be Breaking Bad without one final bit of showmanship, would it? Hank and his partner got shot dead in front of Walt and, knowing that his days were numbered, Walt took out all of his remaining enemies in one go with a triggered machine gun. Nice. The final episode ended with Walt collapsing to the floor of the lab.

Jesse, after months of being abused and forced to "cook" by Walt and other drug gangs, is finally free and drives away from the lab, laughing and crying hysterically. And Walter? After collapsing, he is subsequently surrounded by armed police officers. He was finally caught. But did he die? Or did he get arrested and spend the rest of his days behind bars? Annoyingly, the scene cut before we could find out.

But it seems like, now, we may finally find out what happened.

Because, in perhaps the best news I've heard all year, the Breaking Bad movie is officially happening, and will be gracing our screens next month. Aaron Paul announced the "secret" over social media, after months of hints and teases over the prospect of a movie.

El Camino will be released on Netflix on October 11th.

Aaron Paul has been vivisbly excited about the project.

And has been regularly posting about the movie on his social media accounts since the announcement. He even gave fans a little teaser as to what to expect of the movie and shared a crucial scene from the series that is of some importance to El Camino.

But further details around the movie have been kept tightly under wraps...

Though Aaron Paul has been vocal about his excitement over the project, even telling The New York Times that he “couldn’t speak for a good thirty to sixty seconds" when he first read the scripts for the movie, the presence of other major characters has remained unknown.

And, much to the despair of Breaking Bad fans...

Bryan Cranston has so far remained silent about the project. He has openly advertised the Mezcal brand that himself and Aaron Paul have released, but he is yet to post anything on his Twitter or Instagram account in regards to El Camino.

But now, Vince Gilligan has opened up about El Camino.

via: The Hollywood Reporter

"I didn't really tell anybody about it, because I wasn't sure I would ever do anything with it," Gilligan told The Hollywood Reporter. "But I started thinking to myself, 'What happened to Jesse?' You see him driving away. And to my mind, he went off to a happy ending. But as the years progressed, I thought, 'What did that ending — let's just call it an ending, neither happy nor sad — what did it look like?'

In 2018, Gilligan started telling people about his idea, which was then being posited as a possible five-minute short. He quickly realized, however, that he had a feature-length story to tell. "I always thought, 'This thing, it looks like a movie. It doesn't look like a show,'" he said.

So far, only one character has been confirmed...

In the El Camino trailer, which was released by Netflix in August, you can see as the lovable drug-pusher, "Skinny Pete" is interrogated over Jesse Pinkman's whereabouts by police officers. As well as Jesse, he has been the only other confirmed character to be making an appearance.

And viewers will be seeing some familiar faces...

Fans can expect to see "more than 10 familiar characters" from the original series, including Skinny Pete and Jesse's drug dealer, husky-voiced friend, Badger.

But for now, all we can do is wait.

Or rewatch the entire series of Breaking Bad, I don't know... To see the trailer for El Camino, however, keep scrolling.