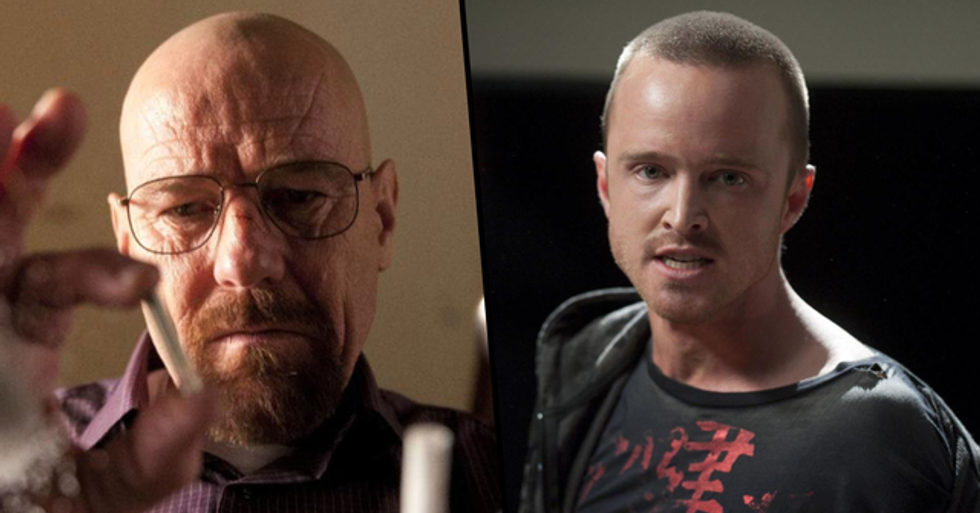 Charlotte Puckering
Breaking Bad has this week been crowned as the greatest TV show of the 21st Century, and it beat some very impressive contenders in the process...

The people have finally spoken.

This week, Breaking Bad was voted as the greatest TV show of the 21st century.

Yep, it turns out that I'm not the only one obsessed with the series.

As all my friends and family will know, no other show has ever had me as hooked as Breaking Bad has. Though the initial "drug cartel" themed synopsis put me off, once I forced myself to watch it, there was no going back.

Initially gracing our screens back in 2008, the show ran for an entire 5 seasons and had the world obsessed all the way until its finale in 2013.

Conscious of the looming medical costs and not wanting to leave his pregnant wife and disabled son bankrupt, Walt teamed up with his former student, tearaway Jesse Pinkman, and used his chemistry skills to start “cooking" crystalized Methamphetamine.

The initial goal of making money to fund his medical treatments was soon forgotten.

The success of their signature blue-tinted drug catapulted Walt and Jesse to high levels of success amongst other drug cartels...

And we watched - in both horror and awe - as Walt transformed from a timid high-school teacher to the hardened, and incredibly dangerous, drug lord, Heisenberg.

The finale of the show left us crying for more.

Literally. Or am I the only one who cried?

The final few episodes were dramatic, to say the least.

But it wouldn’t be Breaking Bad without one final bit of showmanship, would it? Hank and his partner were shot dead in front of Walt and, knowing that his days were numbered, Walt took out all of his remaining enemies in one go with a triggered machine gun. Nice.

The final episode ended with Walt collapsing to the floor of the lab after finally been tracked down and shot by the police.

But did he die? Or was he arrested and forced to spend the rest of his days behind bars? Annoyingly, the scene cut before we could find out.

Speculation was rife as to what actually happened to Walt and Jesse...

So, obviously, fans were delighted to hear the news of the Breaking Bad movie last year. El Camino landed on Netflix on October 11th, 2019, where fans finally found out the fate of the criminal duo.

But, even with the release of the movie...

@ladbible Breaking Bad is pure perfection! Its the pinnacle of a TV show. Nothing comes close in my opinion.
— Sean Ready (@Sean Ready)1596053764.0

Breaking Bad still remains as one of the favorite TV shows on Netflix, with people today still binging the series.

And now, the public's love for the show has become official...

This week, the show was formally voted as the greatest TV show of the 21st century.

A bold title, I know.

But hey, the statistics don't lie!

The British news outlet, LadBible, took to Twitter to find out what the best series from the last twenty years is.

The first semi-final was a choice of Game of Thrones, The Office (both U.K and U.S versions), The Wire, and Black Mirror. Game of Thrones was the clear winner for this round.

And, for the second semi-final...

Breaking Bad, Peaky Blinders, Stranger Things, and Mad Men were thrown into the equation. Of course, Breaking Bad received the most votes here.

So then, it was narrowed down between the two winners...

Game of Thrones or Breaking Bad.  Who's it going to be?!

Well, we all know the answer to that.

Walt and Jesse narrowly beat Jon Snow and Daenerys to the number one title, taking 50.8 percent of the 11,429 votes that were cast.

Understandably, Breaking Bad fans were delighted by the news...

@ladbible Breaking bad for me as they managed to end it well. Games of Trones self destructed in the final season.
— Rob Allen (@Rob Allen)1596059519.0

I mean, it is the greatest show of all time, isn't it? And it didn't have an awful ending.

But others weren't too convinced.

Of course, a huge online squabble commenced, with people ferociously debating which show they thought should have won... Sons of Anarchy, Prison Break, and Sopranos were popular contenders.

Is Breaking Bad a worthy winner? Or should Game of Thrones have walked away with the winning title? For more on the wonderful world of Breaking Bad, keep scrolling to hear what Aaron Paul said about the new movie...