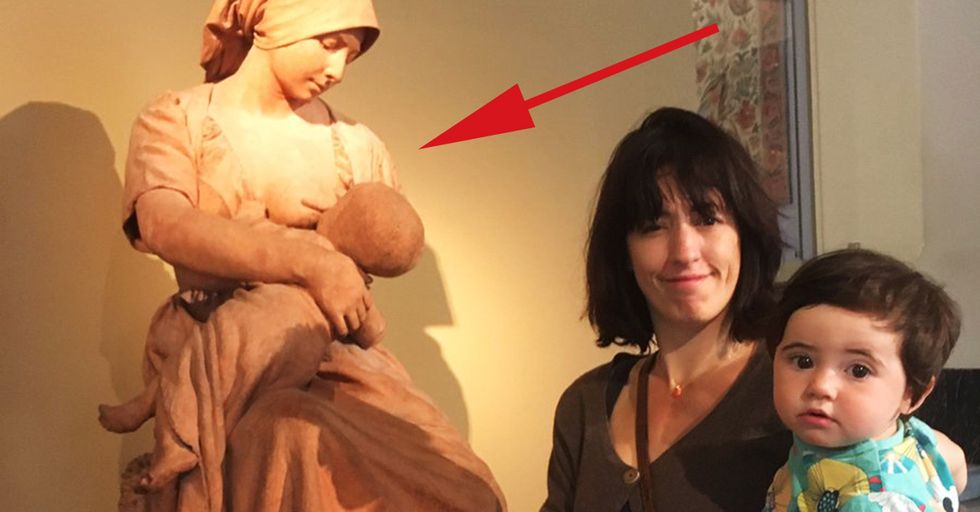 It's no secret that breastfeeding draws controversy from all corners of society. From the grocery store checkout lady to the mailman, everyone's got an opinion on the world's oldest form of nourishing a new baby. And don't even get me started on the Internet. Lactation warriors are as plentiful as varieties of nipple shields.

But now it seems the museum industry is getting in on the action.

Recently an unnamed woman, who goes by the Twitter handle Vaguechera, stated that a London museum asked her to cover herself while she was breastfeeding her baby. Her response? Hilarity, of course.

Seems as though she wasn't the only one trying to get her business done.

After being addressed, Vaguechera was quick to point out on Twitter that, while she had certainly exposed herself for a purpose, the building she was standing in was full of...ahem...like-minded ladies.

Turns out, museums have been peddling in topless women for ages. Who knew?

Stop the presses. Apparently some of the greatest sculptors the world has ever known, as well as whoever constructed that stunning fireplace, have never heard of nursing covers.

Maybe they should drape a few over those marble supports, so people can continue to enjoy their ham on rye.

Lunch by a marble torso? Well, I never.

While Vaguechera's photos themselves spoke louder than words, her captioning abilities weren't too shabby either.

What lends this story extra charm is Vaguechera's ability to make light of an awkward situation; no one likes having their chest singled out in public. But what do people like?

A little witty repartee and observing that, perhaps, this chiseled lady had her own bosom-related problems.

And women took to Twitter to voice their support for Vaguechera.

But best of all? She didn't let the museum debacle ruin her day.

It would've been super easy to let an incident like this shut down Vaguechera's whole outing, but she put her bust...I mean best foot forward, and had an amazing time at the museum.

And, luckily for her followers, she had extra quips to throw out about some marble ladies' "ladies."

The lady does not disappoint.

She wanted to call attention to the incident, because too many women face scrutiny for something that is natural.

Plus, she did it in a funny way, which always helps with Twitter; they love the jokes.

Her series of tweets collectively have almost 10,000 retweets, so her goal of spreading the message was certainly achieved.

Twitter voiced their support, but now the ball was in the museum's court.

Thankfully, the museum director caught wind of the whole debacle and quickly issued an apology.

All's well that ends well, I guess? She states that she simply wanted to call attention to the incident, because embarrassment is a huge factor that influences far too many women to quit breastfeeding altogether.

It seems that maybe some of the museum's employees simply weren't abreast of the current policy.

But things have been cleared up and Vaguechera isn't holding any ill will.

Still, that didn't mean everyone was satisfied with the museum's apology.

And a few people pointed out that the museum employee was actually breaking the law.

The debate raged on.

The museum was clearly in the wrong, but was the apology enough?

It was enough for the mother, so that's all that matters in the end.

Hilarious, smart, and compassionate, (not to mention being a bit of a breastfeeding Internet hero), Vaguechera seems to have it all...except for a nursing cover, which she obviously doesn't need.