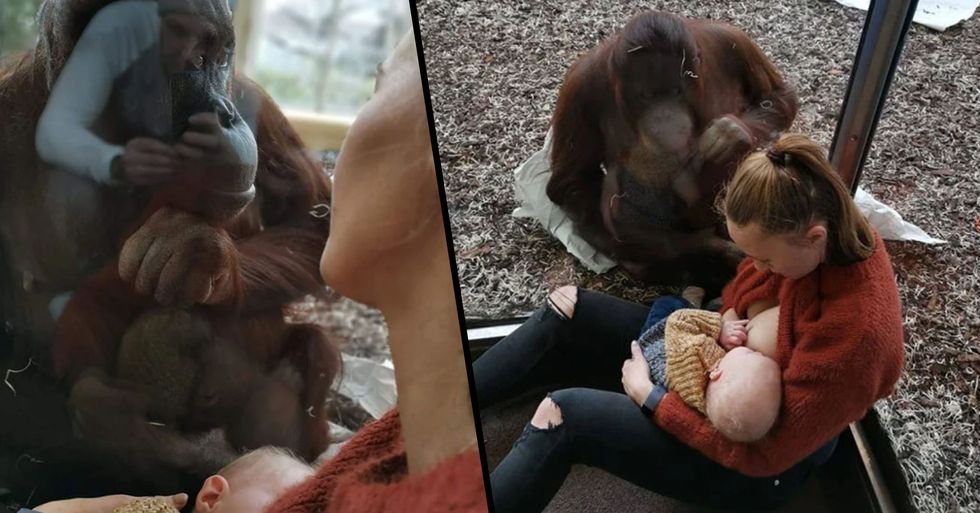 Being a mom is a truly magical thing. But one mom went viral this week for an absolutely beautiful encounter that will melt even the coldest of hearts. After setting down to breastfeed in a zoo, she seemed to share a look of total peace with an orangutan - and the internet cannot get enough.

Being a mom is pretty magical.

The bond you feel with your newborn baby is really second to none.

But one mom encounter this week is particularly cute.

Because one woman's brush with an orangutan has left the internet speechless.

Because during the undeniably intimate breastfeeding ...

An empathetic ape came up to her and proved that animals are more like us than we think.

This is Gemma Copeland.

And on a recent trip to Vienna, Austria, her whole world view was changed by one ape.

Gemma has a close bond with her baby.

And she documents a lot of it on social media.

It's one of the oldest and most picturesque zoos in the world.

Gemma realized her baby was hungry.

And, at the absence of any facilities, she decided to sit down in front of the orangutan enclosure to breastfeed.

And what happened next was truly amazing.

She shared the full story on Facebook to inspire her friends and warm their hearts.

She explained how an orangutan came over to share the intimate moment.

And it's true, the actions of the animal do seem oddly... empathetic.

It wasn't just a passing encounter.

The orangutan stayed as if to protect the pair during their most vulnerable time.

She felt the interaction was magical.

And it seemed the orangutan really knew what was happening, and sensed the correct response.

And Gemma made 2 important points.

Both breastfeeding in public and the orangutan species are under threat and should be protected at all costs.

"My breastfeeding experiences in public have been diverse, some people looking curious, others content and the odd negative one."

"Once I was asked to cover my little boy whilst he was feeding to which I responded by handing over a spare muslin and asking them if they minded covering their shallow-minded selves. This quickly ended the situation leaving me to enjoy my coffee and bonding with my son," she told Bored Panda.

"I would like to think Vienna chose us as opposed to us choosing Vienna."

"When searching for our trip, I had no destination in mind but it proved to be a life-changing choice as little did we know what was about to happen."

But she had no idea the internet would agree. Her incredible anecdote soon went viral.

Gemma also made this point.

Many have been touched by the story - but it would be great if it could make more of a difference.

Either way, though, it's clear the encounter changed her.

As we imagine it would with anyone! Feeling these sorts of connections with animals is nothing short of magical.

And many others have been touched by the story.

Some shared similar encounters with primates that remind us all we're not so different.

It seems they're more common than you'd think.

Which makes them all the more amazing, in our eyes.

We're so glad such a positive story has had such a wide reach.

Our hearts are warm! It seems, though, that some humans aren't as understanding as this orangutan. Read on for a breastfeeding story that will make your blood boil.