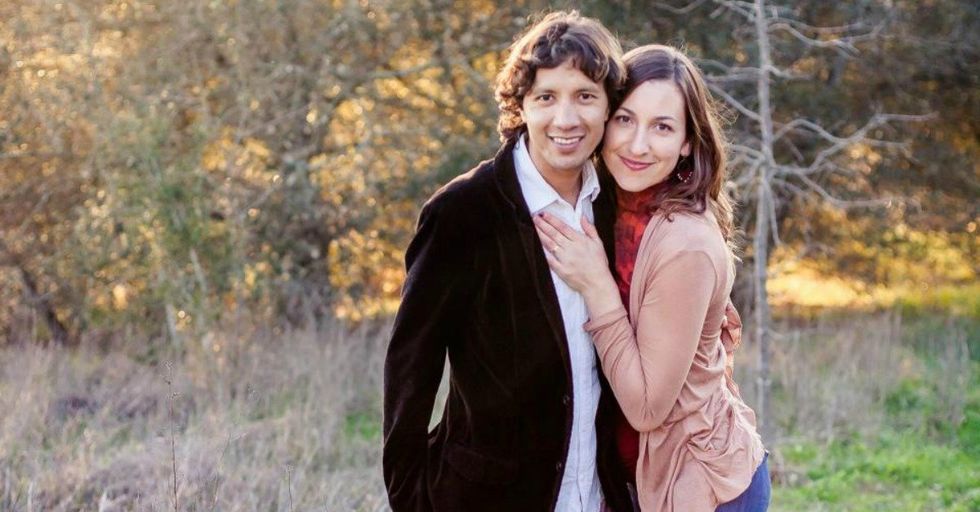 The fact that I'm a vegetarian who is into health and exercise often gets me tagged as a little bit of "crunchy granola" from time to time. I'm cool with that, especially because compared to the couple that you're about to meet, I'm a rock star pulling all-nighters and stuffing my face full of toxic chemicals that are completely unnecessary to survival.

Pull up a chair and grab some forbidden snacks, because this one is a doozy.

Meet married couple Akahi Ricardo and Camila Castello, who believe food and water is simply not necessary and that humans can be sustained solely by the energy of the universe.

Yes, they are “Breatharians," which basically means that they're full of hot air. But "technically" speaking, it means that they claim that their “food-free lifestyle" has improved their health and emotional well-being. And because they "live off air" and not food, they can spend money on traveling rather than normal things like, you know, groceries.

To review, they believe that human beings don’t need food and water and can instead survive on nothing but the energy of the universe.

Camila, who lives between California and Ecuador with her husband, explained to The Sun: “Humans can easily be without food – as long as they are the connected to the energy that exists in all things and through breathing." No word on if this includes "herbal" inhalation, but it sounds a little bit like it to me.

“For three years, Akahi and I didn’t eat anything at all and now we only eat occasionally like if we’re in a social situation or if I simply want to taste a fruit," she added.

The couple became Breatharians in 2008 after completing the “21 Day Breatharian Process," which is apparently a thing that goes as follows: 1. “For the first seven days, nothing is consumed, except air." Which, it should be noted, isn't something you ACTUALLY CONSUME. 2. “For the next seven days some water and diluted juice." Going a little bit crazy there! 3. “For the last seven days diluted juice and water." Math isn't my strong point, but that sounds like 14 days of diluted juice and water? And also, a lot like the liquid prep for a colonoscopy, but I digress.

These people have reproduced — assuming food was never part of their foreplay — and have a five-year-old son and two-year-old daughter together.

Costello says that she ate only five times during her first pregnancy. “I didn’t feel the need or desire to eat solid food during the entire nine months and so I only ate five times, all of which were in social situations," she said. "Hunger was a foreign sensation to me so I fully lived on light and ate nothing."

"And I knew my son would be nourished enough by my love and this would allow him to grow healthily in my womb."

But after having her kids, she decided to go crazy and "explore the joy of food in small quantities with my children as they grew." “So during my second pregnancy, I ate a bit of fruit or vegetable broth during the nine months," she said. "It was still a lot less than the recommended intake for a pregnant woman but I gave birth to a healthy daughter." “Now, Akahi and I eat very sporadically – perhaps three or four times per week at the most," she added. "I might have a few vegetables, a juice or a bite of an apple with my children. Sometimes we have a glass of water, too." Go nuts with your bad self!

But don't worry, because it seems like the children — despite their parents — aren't subjected to "living off sunlight and air."

“We would never try to change them and we let them eat whatever they want – whether that be juices, vegetables, pizza or ice cream!" she said.

She said they want them to explore the different tastes and have a healthy relationship with food as they grow, even though their parents have completely the opposite.

"It would be unfair to impose Breatharianism upon our children now but maybe as they grow, they will get deeper into the practices," she added. That's all well and good, but this has to be a load of crap seeing as humans need food, water, and more than the "light of the universe" to survive. They're not skeletal, and they're not dead, so something more has to be going on here. Just ask Snopes, who did a fact check and found that a) people have died trying to do this, which is obvious and b) Breatharians are generally not telling the whole truth about what they do and don’t eat. Let's just hope their children do continue to grow up healthy and relatively balanced, as promoting this as a lifestyle — while easy to poke fun at — is irresponsible at best. Live a little, people. Eat some pizza. It's delicious.