Brian May Rushed to Hospital After Suffering Heart Attack | 22 Words 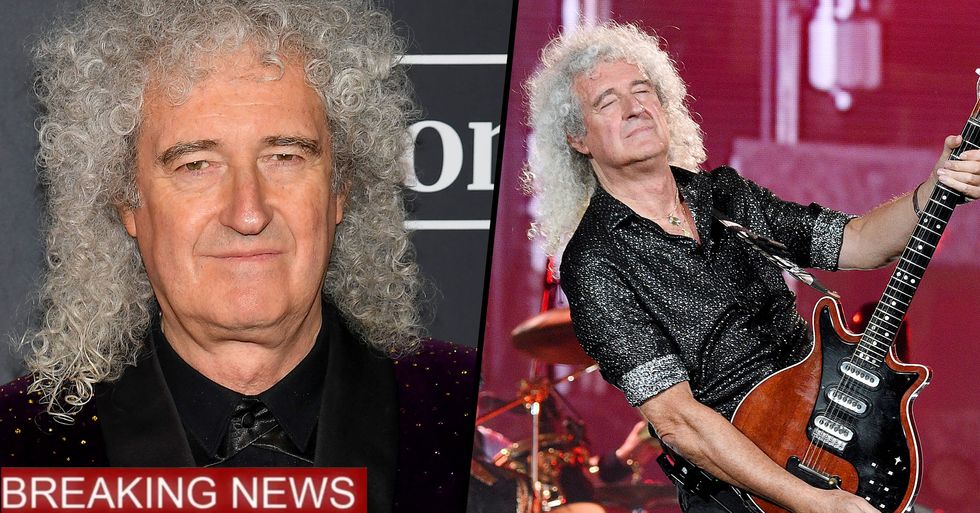 Brian May Rushed to Hospital After Suffering Heart Attack

The news has just come in that Queen legend Brian May was recently rushed to hospital after suffering a heart attack.

Keep scrolling to read more and to see what Brian himself had to say about his most recent hospital trip...

Queen first formed in London in the 70's.

The band first gained UK fame with the release of their second album 'Queen II'.

Following that they released their third and fourth album, gaining them success internationally.

Which stayed in the UK charts for nine weeks.

By the '80s, Queen was one of the biggest bands in the world.

Though, like all good things, it sadly came to an end.

As in 1991, Freddie Mercury passed away from bronchial pneumonia, just twenty-four hours after releasing a statement confirming that he had AIDS. And John Deacon retired years later in 1997.

This wasnt the end though.

Brian May and Rodger Taylor have been touring under the name 'Queen +' since 2004. To begin with, Paul Rodgers joined doing vocals for the band but he later left in 2009.

Adam Lambert then joined the band and has stayed with them since.

Preforming at the likes of the 2012 Summer Olympics in London.

Queen is estimated to have sold between 170 million to 300 million records.

Making them one of the world's best-selling music artists.

Though, we doubt that comes as a surprise.

Guitarist Brian May is one of the few remaining Queen OGs...

And there's no denying that this man is a rock and roll legend.

As you can tell, Brian May has lived quite a life...

One that many people could only dream of.

And despite being seventy-two, an age that many would have retired at...

The guitarist has continued to work tirelessly over the years and nothing has seemed to stop him.

Not even a recent injury to his buttocks stopped him...

Which he told his followers on Instagram all about.

He began by saying " Reality check ! For me. No - the Virus didn’t get me yet - thank God. Hope you’re all keeping extra-safe out there. A decision to relax controls doesn’t suddenly make the danger go away. But me ?? Yes, I’ve been quiet. Reason ?"

He also added later in this post "So, folks ... I need to go dark for a while, getting some complete rest, at home. Please, please don’t send me sympathy - I just need some healing silence for a while."

"I’ll be back - but I need the complete break. OK ? Thanks. Take care out there. Bri"

Now, you must be wondering what has happened? What could he have done?

Well, we bet you couldn't guess.

Brian explained that he actually managed to pull his gluteus maximus by...gardening.

Yes, really. In the post, he explained: "I managed to rip my gluteus maximus to shreds in a moment of overenthusiastic gardening. So suddenly I find myself in a hospital getting scanned to find out exactly how much I’ve actually damaged myself."

Even though the guitarist was on the road to recovery...

Disaster wasn't far around the corner.

The terrible news has just come in that Brian has been rushed to hospital after suffering a heart attack.

Taking to Instagram to inform his followers, he wrote: "Hmm ... Sheer Heart Attack eh? Well, I think I always worried a little bit about that album title. I wondered if it might upset some people who had actually had heart attacks. I’m actually quite relieved now that I’m in that club - and I don’t find it upsetting at all!"

"Take. care folks. And ... why did those discs in my spine get so squished? Well I think 50 years of running around with a guitar strap over my left shoulder holding a heavy guitar might have something to do with it! But it probably WAS all worth it! Bri."

It seems that Brian is slowly on the road to recovery following his heart attack...

And this is all that we could ask for! Get well soon, Bri!