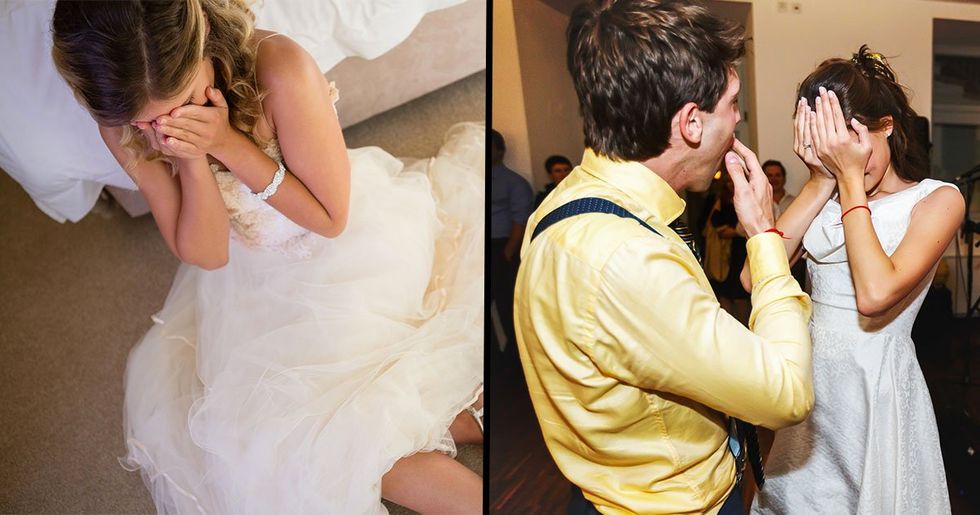 Your wedding day is one of the biggest days of your life, so it's only natural to want everything to be perfect.

From meticulously placed Pinterest boards to numerous dress fittings, you just want the day to run smoothly. But for one newlywed, this couldn't be further than the reality of her wedding day, after she suffered quite an unfortunate accident before her first dance.

A viral Reddit thread, written by the bride's wedding planner, has detailed the events which saw the new bride pooing herself, ruining her pretty expensive wedding gown.

Keep scrolling to find out the full extent of this smelly situation, and why everyone is saying the same thing about the wedding planner.

Wedding days can be happy, yet stressful, occasions.

Because, let's be honest, when all of that planning and money goes into one day, it's bound to be a bit stressful.

All you can pray for is that it runs smoothly.

It's literally one of the biggest days of your life, so, obviously, nobody wants anything to go wrong.

And, of course, it's natural that a lot of the attention is on the bride.

But one bride attracted attention for all the wrong reasons after suffering a rather unfortunate situation right before she was going to go on stage for her first dance.

The wedding planner of a wealthy bridezilla has taken to Reddit to describe how the bride accidentally pooed herself.

Yes, you read that right. The American bride's wedding planner has penned an in-depth description of the unfortunate day in question, and how a $15,000 luxury wedding gown was sacrificed in the process. So sit back, relax, and grab the popcorn. Actually maybe don't, because this story gets very gross, very quickly.

The event planner begins by setting the scene.

The bride and groom's families were "fairy wealthy," the planner explains, and the bride requested a rural, "shabby chic" aesthetic. Very Pinterest.

Basically, the wedding reception was set to be extremely extravagant.

The reception, the bride decided, would take place on the family property, in a historic barn.

Although it looks like the problems with this wedding started early...

On the Reddit thread, the planner explained that the logistics of the barn location were a nightmare. "Between having to have the barn cleaned, the fact that we needed auxiliary tents as the barn wasn't large enough, and the fact that the property lacked electricity and running water. "The latter was solved with a bank of generators, tubs of water for catering, and a side tent with portajohns hidden inside."

Because the bride was quite a "bridezilla," the ceremony and reception had to be carefully planned.

"The bride had, to be honest, been quite a bridezilla, but it's my job to deal with those things. "At this point, the ceremony had ended, cocktail hour is shutting down, professional photos were taken. We were prepping to transition to the entrance of the bridal party, which would be followed immediately by first dance and cake cutting. During this, the dinner would be staged, so every aspect was being fairly carefully timed out." Wow, talk about organization.

And all was going well, until this happened...

"I was speaking to the caterer when I happened to glance over and see the most curious blend of expressions pass over the brides face, and she frantically waved down my assistant." Within a matter of seconds, the planner's headset was beeping. "A few moments later, my headset beeped on, and my assistant said 'we have an issue.'"

Turns out, the bride had passed wind and, well, passed something else too...

Yes, she had followed through - in quite a bad way. We aren't talking a little bit here... Bear in mind, the bride was wearing a huge, expensive ball gown "with a fitted, boned strapless top in a sort of embellished mesh." Underneath the ensemble, she was wearing a shaper garment and hoops and slips, meaning getting her to the bathroom was automatically ruled out, according to the Reddit user. It gets much worse... just keep scrolling.

The assistant then took the bride to a portajohn, to attempt to access the erm...damage?

And it seems that the damage was much worse than anyone could have imagined... "We had already realized there was zero way of her going to the bathroom: we had issues getting her into a limo, and having her use portajohns meant one of us would have to get personal. That was my assistant's job. I radioed to everyone to expect a fifteen-minute delay, and they headed towards the tent," the user wrote.

"The fifteen minutes pass. Then twenty. Finally, my earpiece beeps on. 'The previous issue is more than we anticipated.' I ran over to find my assistant looking horrified."

Turns out, there was a very valid reason that the bride had pooed herself.

She'd downed various health shakes to try to ensure that she wasn't bloated in her dress, but that, mixed with the cocktails that she'd just been consuming and the "fairly decent breakfast" that she'd eaten, made for quite the dire combo. And it certainly showed... "The substance that had come out of her body, as a result, defied explanation. "It was slimy, oily even, with stringy bits and the consistency of hair gel. Not only had it been a rather profound accident, but the smell was unrivaled. Generally, a substance no human body should emit."

Remember the shaping pants that the bride was wearing? Well, they were latex, skintight, and waterproof, so we guess you can see where we are going here...

"The poo had just sort of filled it [the pants], like a water balloon of horror. My assistant had opened up the snap crotch and just released the evil trickling down the bride's thighs."

Gross. The assistant then desperately tried to wipe up the mess with dry toilet paper, which was a bit of fail, to say the least.

"My assistant quickly sealed it back up and she and the bride vainly tried to wipe up the goo, dry, with toilet paper. This just spread it around, so they decide to give up."

The bride was now sat in tears and smelling less than pleasant, with a scheduled, choreographed dance to get to.

"The bride is just flipping out that she's making her guests wait, that she has a choreographed dance waiting to happen, and she needs to be introduced NOW. I'm just looking at her manicured nails. The residue of diarrhea is just embedded in her nail bed. I start trying to scrape the poo out with a fabric stain wipe, while the bride insists that the show must go on, immediately."

And per the bride's request, the show really must go on...

The groom noticed his wife's undesirable odor straight away, but was quickly distracted by the assistant, until the pair took on the dancefloor, poo and all.

But even more horror awaited...

"As the groom spun his bride around, hand on her waist, he is squishing the poo up the insides of the waist trainer, up and out the back waistband. "To our horror, we watch as an oily stain spread across the mid-back of the gown. As we are still cringing from this, the groom sets his hand firmly in the middle of the poo stain." This has got to be up there with one of the grossest things that you could ever lay your eyes on.

Drastic action needed to be taken.

With the odor detectable, even from the DJ booth, hiding the accident was becoming less and less easy by the second. And, as the newlywed couple started cutting the cake, the planner and assistant noticed that they both had the remnants of her accident on their hands. "As they left the dance floor, I had someone rush wet naps to the groom and to bring me the bride. The support tent was closed down for me, and I pulled a tub of clean water from the caterers. "She walked in to find me in dish gloves and a poncho, like American Psycho, The five minutes, I was sponging down a sobbing, naked bride, while I questioned every life decision that leads to this point," the planner explained.

And when operation cleanup commenced, it just kept getting worse.

Now, this isn't for the those that are weak-stomached, because if you didn't think that this story could get any more disgusting, you're massively mistaken...

"The diarrhea was everywhere, spread in a thin layer across her body. It may be the most disgusting thing I've ever dealt with. With her clean, I threw away the waist shaper and scrubbed down the $15 k wedding gown back in a plastic basin. The inner lining was a loss, and I cut it out completely."

The bride was then re-dressed and offered a Xanax for the ordeal.

"The support tent smelled like a sewer and just was closed for the remainder of the event. The groom was a sport, never directly saying anything, but asking if we could cancel the garter toss as he didn't really want to go under her skirt."

Now that's one hell of a story, and the people of Reddit seem to all be saying the same thing about it...

Many users were commenting about how professional the planner and their assistant had been when faced with the smelly situation. Somebody give these people a pay rise.

Others were simply horrified by what they'd read.

It certainly wasn't the easiest of reads, we have to admit. But this is one of many wedding horror stories that have been documented online. Keep scrolling to connect the dots on another wedding-themed disaster which somehow involves a jilted bride, paintball, and Las Vegas. Seriously, it's the most insane story ever...